Girls: OCD, It's Back

It must suck to drown your sorrows in sour milk every morning when you wake up in a sullen apartment that is more depressing than an Edward Hopper painting on Lithium. Too bad you're a punk-ass quitter who can't handle his buzz and stopped partying at age 17, denying yourself some of the greatest moments in the world involving binge-drinking in your late teens and early 20s. If you were still on the sauce, you'd wake up with an insta-swig of whatever was leftover in the plastic bottle of low-end vodka on your nightstand. You're a wasteful wastrel wasting the best years of your life completely sober and not being wasted.

If you're going to sponge off of the folks at your AA meeting, the least you can do is buy some damn cookies for the group, but don't go all hippie or health-food Nazi on them and bring gluten-free or sugar-free tasteless crap. These are former hardcore drunks who gave up the hooch and have to sit through your whiny diatribes and listen to your Hannah bad beat stories, so the least you can do is bring them the tasty shit. Chocolate covered Oreos. Mint Milanos. You, know those oatmeal cookies with the icing. 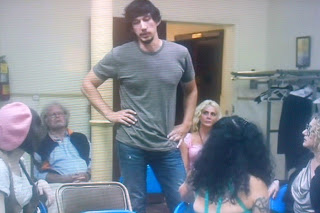 Hannah is a narcissistic solipsist who drove you so crazy that you began to attend regular AA meetings. I just think about her self-absorbed megalomania and want to drown my misery in a half of bottle of Jagermeister. Maybe if you went out more, drank in bars, and mingled with a different batch of miserable, self-entitled young women who over analyzed everything, then you wouldn't have to worry about a brash Hannah stalking you and staying at your depressing crash pad of gloom all the time. Hey, we both know you're better without her in your life. That fucking greedy zit got you arrested for fuck's sake and made you spend the night in the tombs with a bunch of crackheads. I'd be pretty fucking pissed if she called the cops on me like she did, so pissed in fact that it would have put any sane man over the edge.

Man, I dunno about you, but I thought the zany cougar from the AA meeting was going to maul you. Instead, she offered up her daughter. Typically, AA meetings are the advantageous places to scoop up vulnerable women because they probably ditched the bottle in exchange for a sex addiction. Swapping addictions is what addicts do. In America, they only want to stop your addiction through pharmaceuticals, but deep down we all know it's healthier to switch out one addiction for another that's less destructive.

The ex-drunk, Jewish, aggro-cougar set you up on a blind date with her daughter, eh? Natalia. She has a cooler name than Hannah, which is an awesome start. This bodes well. If Natalia's mother is an alkie, then you know she has some scars from old wounds caused by her mother's boozing. The fact that her mother already met your sorry ass at AA automatically erases any fears about a future girlfriend's parents judging you for your troubled past. Then again, you're super suspect in my book; you're sober and went out with Hannah. It's one thing if you were knock-down drunk all the time and too wasted to hear Hannah's psycho-babble, but you did all that sober like a Mormon. What the fuck is wrong with you, bro?

Thank God the ex-alkie ferocious cougar's daughter is a hottie. She looks like Meadow Soprano meets one of those chicks from a bad CW teenage drama. If you play your cards right, you should be able to get a hummer if you haven't already. Plus, she works for a private investigator. This is a great asset to have. I have at least nine or ten shady friends I'd like to investigate.

You're a fucking tool.

1. You carried Shoshanna's books after class like you're a chumpstain high school moron. Are you two going steady?

2. Listen up, Mr. Grumpy-pants... 33 year-old guys don't feel creepy at college parties. What are you fucking brain damaged? A college party is a fucking wet dream for every 33 year-old guy out there, especially the married ones. Get off your self-righteous high horse, and get down. You skipped a party to sit in and read a book in your underwear? Seriously, what the fuck is wrong with you? Nothing is more exciting than being surrounded by drunken 20-something women who will sleep with almost anything that moves. By passing up on the college party you missed a chance to ogle at shitfaced coeds and acquire dozens of potential pics for instagrams and other hipster-themed memes. 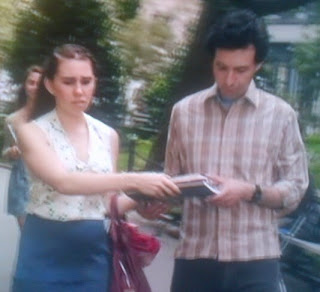 I know what you're up to, you sex kitten. You cannot hide those impure thoughts. Why don't you hop up on Santa's lap and tell him who's been naughty and who's been nice?

You might have that schmuck Ray fooled with your "innocent little girl" hustle, but I know better. I know all about your type... playing coy when the entire time you're a closet nympho.

You like stirring the pot don't you? You could have been a little nicer about telling an obviously wounded Marnie that her ex-boyfriend made a shit-ton of cheddar creating an app that her snooty-gold-digging-ass inspired. But, you weren't nice, were you? You acted like a dirty little floozy. You told her on purpose because you like seeing your friends withering in pain. You're addicted to BFF-schadenfreude. You relish in others' misery. Like faux-worrying about British bohemian bombshell Jessa, when in fact you get intoxicated thinking about Jessa's broken marriage to shit-for-brains and then opting to be Hannah's roommate, which we all know is like the third circle of hell in Dante's Inferno. Jihadists would rather get waterboarded than live with Hannah for a month... and you know this! 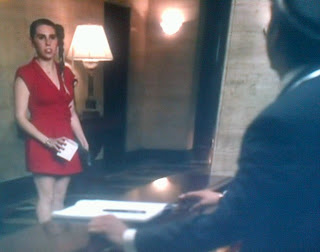 What the fuck is up with your new-money college classmates? Who the hell rollerblades and shops at J. Crew? That's what my friends did in 1993... when we didn't have the internet and people bought stuff from mail-order catalogs in a genuine, non-ironic way.

BTW, Radika looks like the Indian version of Snooki, even with a fake spray tan.

You exposed your disdain for the working class hoi polloi by getting all giddy about socializing with other vapid scensters who throw impromptu parties with champagne and White Castle in a pre-war doorman building. Yet your overbearing neurosis is evidence of another girl drowning in her mother's suffocating disappointment and her father's stinging guilt, which is why you don't feel worthy of anyone's love, especially from your self. That explains why you went slumming with the proletariat and stroked the doorman's lizard.

Wait until your parents find out that you've been mixing classes. They might even cut you off! The upper class is not supposed to interlope with the commoners, but you ignored convention and refused to contain your animal-like seething lust for guys in uniforms. After you were deflowered and took a couple of rides the vanilla gorilla, it was a matter of time before you transformed into a full-blown sexaholic. Man, it figures someone spoiled and immature like yourself would ruin their first true love over a petty disagreement? Typical spoiled princess projecting daddy issues onto her clueless boyfriend and then jumping the first guy who gave her a moist deck.

You're the most disappointing kind of one-percenter; you punished that dork Ray by doing the freaky-freaky in the mailroom with a min-wager.

Yours in lewdness,
Pauly

You channeled the hatred of your ex-girlfriend into creating an app for other scorned people who got out of bad relationships. Kudos for earning fat paycheck and whipping up Marnie into a jealous frenzy.

BTW, I have a fucking genius-brilliant sportsbetting app idea. We should get together and discuss beta-testing.

P.S. If you go see Jack Johnson, I will fucking kick you in the vagina.

Shallow girls like you get what they deserve. Like monkeys swinging vine to vine always looking to climb higher and higher up the social jungle ladder until they slip and fall face down in a pile of elephant dung.

Do you like Charlie more now after the scum-weaseling pretentious hack of an installation artist dumped your one-dimensional ass?

Or are you stalking Charlie because he's got tons of money after launching an successful app?

Or is it the fact that he's surrounded by intelligent women sipping gourmet coffee and discussing techie shit like Cocoa Touch or Objective-C? 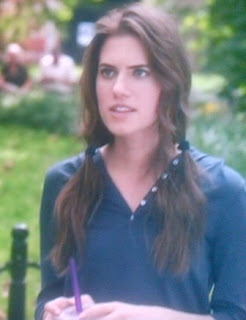 I know why you're bitter. After you ditched Charlie for a hot-shot art-scene celeb, you got used and brutally kicked to the curb. Now, your boy hit it big and it's driving you nuts because you were always the over achiever and he was the slacker just trying to get by. Hurts doesn't it? Most of the app developers I know have black rings around their eyes and serious lockjaw from being so jacked up on Adderall and 4-Hour energy drinks after staying up for five days in a row at a time, and they don't have dope-ass offices because they're working out of their messy apartment or hijacking all the outlets at the local Starbucks. Yeah, the average app designer does not have a bevy of cool, pretty co-workers who regularly make meme videos (prosaic idea: white people dancing awkwardly wild to hip-hop). You should be jealous. Charlie hit a grand slam with FORBID, which your vacuous ass inspired.

Good luck with the singing thing. I'm all for people pursuing their dreams, but we both know you're going to give up in a few months because "it's like, so haaaaard." It's easier to hate on your successful friends than to put in the time to carve out a life of your own.

I'm starting to think you're worse than Hannah if that's even possible. Hannah is always going to be the center of her own universe, but you want to achieve things in life for the wrong reasons. Maybe Ray's chat got you on track and you'll discover that you don't like actually singing, but working in karaoke bars. You can meet a lot of gay guys belting out Abba songs and listen to a lot of tone deaf American Idol rejects to inflate your precocious, precious ego.

No one needs a cup of mushroom tea more than you. Ditch the gummi-frogs, the demeaning hostess job, and your terrible friends who love the fact that you're a hot fucking mess. Buy a ticket to Burning Man and go find yourself.

P.S. Norah Jones, seriously? That's your go-to song? What are you a soccer-mom on Zoloft? 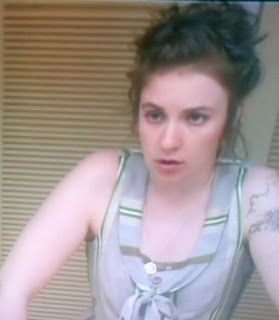 P.P.S. What kind of pharmies did you score? I hope you told your doctor you had a deadline and couldn't concentrate on finishing your e-book, so he'd write you a script for Adderall.