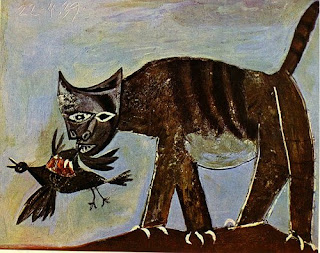 I have the opposite of writer's block. I cannot stop writing about stuff that I probably shouldn't be writing about. For example, last Saturday morning I should have been working on a work project, but instead I re-listened to Beck's Mellow Gold and Odelay from start to finish and wrote an essay about how Loser was released twenty years ago. I do shit like that all the time. It's frustrating in one aspect because I should be doing other work, but at the same time I'm actively trying to avoid doing one thing means I'm using creative muscles to do something else.

This is a nagging, yet nasty habit that's hard to break out of mainly because I feel as though writing and self-expression is a good thing and necessary activity if I want to progress as a writer, especially after stunting my growth for a few years grinding out articles about the genius of pro poker players. It's one thing if I wasn't writing and using my time to sit around and drink in dive bars, or playing Grand Theft Auto, or binge-watch Cheers1 from the first season. The fact that I'm writing (and reading a ton), is the sole reason I haven't completely flipped out on myself.

My new daily activity is reading articles about procrastination. There's a ton of content about the subject and I spent several hours over the last week digesting hundreds of those articles about people who put off things (like Good and Bad Procrastination and Procrastination Is Not Laziness). I even read one article that suggested that procrastination was not something to be vilified, rather celebrated because it is a quirky trait in really talented people. I got a little punch-drunk on that argument, and then I got a little miffed. So if keep on putting things off, I can achieve the same level as "really talented people." Sheesh. I've been doing it wrong all these years. I thought hard work and discipline was an integral part of the so-called "10,000 hours" which you need to devote to something in order to become highly competent. It turns out that I can achieve greatness if I simply wait to the last minute to do everything,.

Success falls somewhere in the middle of being highly prepared under some semblance of pressure and totally winging it by the seat of your pants. Without deadlines, I don't finish anything in a timely manner. I'm the guy who took five years to write a book and if it were up to me, I would have taken another six months to do one more edit. At the same time, I'm someone who rejects the entire concept of authority so having a stern deadline is something that makes me standoffish. I've been around the block enough to know that nothing is worse than forcing something to happen versus allowing it to evolve organically. My best work happens through the organic process versus force-feeding a square peg into a round hole. The trick is to be able to balance everything... have a target deadline and do some preparation and then wait around for inspiration to strike.

I usually won't put anything down on paper until two or three days before the deadline. A better organized person would have already written the column by the time the editor reminded everyone that the deadline is upcoming in a week or so. Alas, I don't do my best work that way. So therein lies the problem.

I have an addictive personality. It used to be highly self-destructive, but I figured out how to channel those personality flaws into more productive ways. I went a huge stretch of 7-8 years in which I constantly traveled and wrote for myself and others and kept a job in a brutally tough industry despite the fact the media paradigm is shifting and the government cracked down on online gambling. When I finally took a break away from the grind, I realized how much I enjoyed the time off when I lived in San Francisco. In essence, I got addicted to doing nothing2. I needed the break but I didn't want to get addicted to laziness, which is why I decided to shake things up at the end of 2012.

This year's output on the Tao of Pauly is the opposite of my "gun-to-the-head" creative process. My current philosophy with this blog is to use it to help me break out of a (bad) routine and force myself to write at a given time (and length) every day no matter what. Initially, I was worried that I would rebel against my own personal challenge and crank out crappy posts, which has happened a lot actually, like take this post for example -- a fluff piece about procrastinating. I'm filling my morning blog quota by writing about how I keep procrastinating other things that need to get done (taxes and work projects). Then again, I hit a couple of homeruns here when I wasn't expecting to even step up to the plate, which is why I extended this process from just the month of January to an indefinite blogging philosophy (minimum of five posts a week and one link dump, plus a couple of fiction pieces per month).

I can only justify procrastination if it's going toward a greater good. Any creative activity is a positive thing like watching documentary films, or reading books because those help massage the brain and keep the creative juices flowing. Then there's work-related activities that I could do like catching up on reading articles about online gaming legislation, or crunching numbers for sportsbetting purposes, or listening to sportsbetting podcasts, or scouting college hoops games for March Madness.

Then there's the utterly stupid shit that I did over the weekend that I had absolutely no excuse... like getting sucked into a five-hour marathon of My Cat From Hell (the host looks like the hipster version of my buddy Human Head and he helps cat owners who have a hell cat). Wasting a full day's of work watching My Cat From Hell is inexcusable and that I'll never get that time back. I don't do stuff like that very often, but when I do, I feel horribly guilty and feel as though I have to read at least ten hours to counteract the five hours of being lobotomized by the boob tube.

Good news... with college basketball fever ramping up, I can guarantee you that I will not be wasting any time on stupid cat shows over the next few weeks. This is my favorite time of year when I park myself on the couch and don't move for the rest of the month while conference tournaments finish up this week and conclude this weekend, and the March Madness tournament beginning next week. I can justify investing hundreds of hours into watching college hoops the next three weeks because I make money doing it. But the silly cat shows? Just mindless entertainment for procrastinating stoners.


1. I read an article about the oral history of Cheers and I was pumped to discover that Amazon Prime members were able to stream episodes of Cheers for free, so I watched six or seven before I stopped. If I went any further, I would have devoured the entire first season.... and second season... and then the entire series.

2. 'Nothing' is a strong word. I stepped back from being a daily content generator on multiple sites as my output trickled to almost nothing. I wrote at my own pace and slowly worked on an anthology of short stories which is taking forever because I refuse to give myself a hard deadline.