Such a Lovely Place

I know a documentary is good when I sit through the entire film about a subject I don't care about. In this case, it's was a rockumentary about a band I didn't really like much, but I genuinely like all music documentaries so I went into this one thinking I might have to turn it off because I'm not into the Eagles. But man... I got sucked into the Eagles doc, which was three hours long!

The History of the Eagles is really two different documentaries; first part covers the rise of the Eagles since their formation in the early 70s (as a back-up band for Linda Rondstat) and up until they broke up in 1980, while the second part covers the Eagles reunion in 1994 for their "Hell Freezes Over" tour and subsequent tours. I thoroughly enjoyed the first segment (rise + fall) more the second (redemption and second chances), but I was particularly surprised how much I dug The History of the Eagles, so much so that I found myself re-watching random segments of the first part. 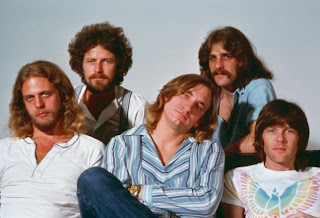 The music is familiar. The Eagles were inescapable on classic rock radio stations. At this point, everyone (even non-music fans) probably knows a handful of Eagles "greatest hits" through sheer osmosis via TV commercials, movie soundtracks, stuck in traffic listening to the radio, getting bombed in a dive bar, or maybe even humming along to elevator muzak. Even if you don't like the Eagles, you've still heard Hotel California more times that you realize. I'd say that any given human has heard parts of the Eagles' anthem at least a thousand times in their lifetime -- spread out in bars, car radios, pop-culture vehicles (especially commercials) -- without them even actively choosing to listen to it. Hotel California is just one of those songs that's everywhere. Ubiquitous. Omnipresent. Plus if you're a fan of The Big Lebowski, you've heard a sick Spanish cover by the Gypsy Kings. That's the only version of Hotel California that is on my iPod, which will pop up randomly and when it does, I often conjure up images of Jesus Quintana in bowling alley scenes.

The documentary spent a segment discussing the recording of the song Hotel California and the ensuing discussion on multiple interpretations (both real and imagined) could have been its own documentary. Hotel California is the prototypical song about luxury, decadence and depravity in the music biz. Henley and Frey wrote a tale about the downside to selling your soul to the devil for a taste of the "lifestyles of the rich and famous." The song heeds a stark warning because everything comes at a price, especially success, and the relentless pursuit of the American Dream can quickly take a turn for the worse and become the American Nightmare.

Although I listened to endless classic rock on WNEW in NYC, I wasn't an Eagles fan. Instead, I got to experience the post-break-up Eagles and the not-so enthralling solo careers by Glenn Frey and Don Henley. Frey cranked out cheesy 80s synth-heavy rock songs that you'd hear on the soundtrack from Beverly Hills Cop movies. Meanwhile, Don Henley took a softer approach with an adult contemporary rock route and teamed up with Bruce Hornsby to crank out a few notable hits that sold records and appeased critics. Meanwhile, throughout the 80s, good old Joe Walsh hit the skids and continued his indulgent lifestyle. He crawled into a bowl of cocaine and a swimming pool of booze for the entire decade. If he didn't enter rehab in the 90s, Joe Walsh wouldn't be alive today.

In college, I got into Joe Walsh's work with the James Gang (pre-Eagles) and thought he was the best part of the Eagles and that Frey was a fucking toolbag. It wasn't until I saw this documentary that I realized that some of the stuff I loved the most was not by Walsh, but rather it was Don Felder (who in the mid-70s was a dead-ringer for Sweet Sweet Pablo) who should get the accolades. Felder is forever known as "one of the other Eagles" that no one ever knew by his name. Heck, I didn't learn it until I saw the film. Felder displayed some serious chops, but he didn't have a strong enough voice or song writing pedigree to compete with Frey or Henley. Felder's eroding relationship with Frey was one of several reasons the band broke up (cocaine and creative differences were others). Although Felder was a part of the reunion tour in 1994 and the second incarnation of the Eagles to end the decade, Frey/Henley eventually cut him out of the picture in 2001.

I saw Almost Famous a few thousand times and Cameron Crowe admitted that the Russell Hammond character was an amalgam of several rock-n-rollers, especially Glenn Frey, but the resemblance of early 70s Glenn Frey to Billy Crudup's Russell character was too uncanny. Almost freaked me out a few times. Crowe also said that Frey was the guy who begged him to just "make us look cool" when he was writing an article about the Eagles for Rolling Stone.

My favorite parts of these retrospective rockumentaries are the random stories that aren't really a part of the bigger picture and seems like filler, but it's those little vignettes that paint the absurd life on the road, or what its like being in a traveling carnival. The doc is peppered with tons of those little entertaining stories (like Frey being Jackson Browne's upstairs neighbor, or Joe Walsh going to a fancy restaurant with John Belushi after they spray-painted their jeans by coloring them black) but it almost could have been a doc about any other band from that era, ya know?

The Eagles internal drama was one of the main story components to this film, while the overall tone of the rockumentary followed the basic story arc of young men heading out west to fulfill the American Dream in the glitzy and cutthroat shadows of Hollywood. Henley and Frey were at the right place and at the right time and had enough talent and ambition to get a shot at a record deal with David Geffen. Yeah, the Eagles story is not like any other story about young musicians trying to hit it big, but then the shit hits the fan as soon as they hit it big and it's a fight and struggle to stay on top, yet they tragically can't handle burning the candle at both ends and ultimately crash and burn... creatively, financially, domestically, and spiritually. Piles and piles of cocaine and jealousy only complicated matters. Pretty much every big band from the 60s and 70s had a similar arc, which is why Almost Famous was such a great fucking film because it gave you a glimpse into what really goes on behind the scenes and explains the mercurial dynamics between band members and their fickle relationships with their own managers/agents and ruthless record company execs and the snooty media elite, not to mention how their interact with their rabid fans and handle the pressures of performing whirlwind tours while maintaining obvious drugs habits and addictions to booze and/or sex.

Check out History of the Eagles on Showtime. Like I said earlier, I loved the first part the best, but after getting sucked in, it makes you really want to watch the second part and see how everything turned out and see who got sober (Joe Walsh), or who was still an asshole (Glenn Frey).
by Pauly at 3/27/2013 11:35:00 PM