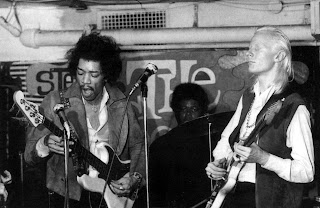 It's never been a better time for music... if you know what you're looking for.  I miss rummaging through music stores, especially those dingy second-hand stores, seeking out hidden gems.

Remember how you used to buy an album? You heard a song. It froze you in your tracks. Maybe it was a hook or a riff or a catchy lyric. You found out the name of the band and then headed to your local record store. You wandered through the aisles alphabetically until you found the artist. Then you bought the album based on one song, rushed home, tore it open, and then listened to that initial song two or three times before you explored the rest of the album.

Man, I used to get so pissed when the rest of the album sucked, which happened more times than I'd like to admit. I can't tell you how many albums I bought over the last two decades that fell into that category. It's rare that you buy something for one song and fall in love with the entire album. If an album had at least three songs on it I liked, then it offered some value. Otherwise, it felt like a total bust.

The way iTunes is set up, you can just buy the one song you want and not have to spend $$$ on the rest. I must have saved a few grand by not buying full albums. At the same time, YouTube gives you a chance to listen to new music before deciding to buy on iTunes or elsewhere.

One of my new favorite things to do these days is search for random music on YouTube. This is an activity that I engage in very late at night after catching a really strong buzz, or while stricken with insomnia. It's been an awesome place to find old jazz records, but I also stumbled across old school videos back at a time when MTV actually played videos. MTV was birthed right around when I was a teenager so I was born at the perfect time to appreciate music videos -- especially the initial wave that flooded the shores of MTV in the late 1980s. To come across those videos is like getting an instant flashback to my youth.

In 2013, I'm at a point in my life when I don't care what other people think of my choices -- especially musical choices. Simply put, I dig what I listen to. If I don't dig it, I'm not going to waste my time.

I'll give anything a listen to at least once. If it's a band I really like, or something I should normally like then I'll give it a second listen. In a few rare instances, I'll give something I don't like third listen, but that is in a rare case if a friend really insists that I give it another try.

I'm in a weird phase in which I'm devouring tons of old jazz records but juggling that with a slew of newer material. Here's some of the newer stuff I listened to, mostly at the recommendation of friends...


"Atoms for Peace" by Thom Yorke - A couple of years ago, Nicky and I caught Thom Yorke play a solo show in L.A. His band included Flea from Red Hot Chili Peppers. Yorke was playing music he wanted to play outside of Radiohead, so it was interesting to see what was the soundtrack tinkering around his head. I have a theory that Thom Yorke is an alien who is unable to return to his home planet, so he's perpetually sad and tries to amuse himself through music. Man, I can write an entire book about that Thom Yorke/alien theory. I just might someday. Anyway, Yorke moved to LA for several months to record this album. So it has somewhat of a SoCal influence mixed with his British sensibility to produce a soundtrack for the cosmos.

"People, Hell and Angels" by Jimi Hendrix - I haven't been excited about a new Jimi Hendrix album since the release of his Blues album. I didn't even know about this one until someone tipped me off and I got my hands on a copy before its release date. This new album "People, Hell and Angels" is what I call a money grab by the estate of Jimi Hendrix. This is the first album of new material to be released posthumously. Someone dug through the Jimi vault and uncovered un-released material that was leftover from previous sessions. I guess you can say this is the stuff that was left on the cutting room floor, which means it's okay and somewhat edible.

"Boys & Girls" by Alabama Shakes - Last year when my friends were listening tot he Alabama Shakes, I dismissed it and blew it off as a knock-off of The Black Keys but with a female singer. Man, I was so wrong. I recently delved into the full album of Boy& Girls and it blew me away. It's not the most peppy music and it's a nice soundtrack for jilted lovers or someone covered with a thin layer of melancholy. It's raw. Powerful. Soulful. From the gut. It's the kind of southern-fried blues music that forces you to experience the same emotions Brittnay Howard conjures up with her raspy, yet gospel-sing-like voice. The Shakes are one of my new favorite bands. I cannot stop listening to this album.

"The Terror" by the Flaming Lips - I dig the Lips, but this is a disturbing and utterly bleak video. There's not enough drugs in the world to get me in the right frame of mind to appreciate this concept album about a world without love. I deleted this album before even giving it a second listen.

"Free Magic" by Medeski Martin & Wood - I don't really listen to MMW live albums much mainly because they are one of those bands that get cooking when you see them live. I was let down by their Radiolarians project (three discs) and those tunes didn't feel right when I saw them play it during live shows. Luckily, Free Magic is the return to the groove-oriented bagaboo jazz that I dig.

"The Next Day" by David Bowie - I'm currently in the middle of a project in which I'm listening to all of David Bowie's albums in chronological order. I started doing this after I read a Grantland article about Chuck Klosterman writing a potential obituary for Bowie when there were rumors he was on his deathbed last year. Anyway, I had a brief Bowie phase last year when I lived in San Francisco and I had cherry picked a bunch of his greatest hits and started listening to that a lot before I lost interest. Anyway, I had finished The Young Americans and started the Berlin trilogy (produced by Brian Eno) when I got a copy of Bowie's new album The Next Day. My initial reaction... it was all over the place. It was like Bowie couldn't figure out a specific direction so he went for a shotgun approach (from post-grunge to Velvet Underground to U2 during the Zooropa years). I preferred the opening track that sounded more like The Talking Heads than the Tom Waits'-like songs or the couple of songs that sound like The Dandy Warhols trying to imitate David Bowie.

"An Awesome Wave" by Alt-J - The Joker raved about this album last year by a British indie band that had become the "hipster band du jour" in the last quarter of 2012. I gave it a listen last year and then forgot about it. I re-listened to it recently and still have mixed emotions. It's not as bad as I originally thought, but not as good as I had hoped.

"We Are the 21st Century Ambassadors of Peace & Magic" by Foxygen - Broseph tipped me off to this L.A. band that has a unique chameleon-like sound in that they can mimic the tone of different genres from the 60s and 70s. One song they'll sound like Velvet Underground, yet in the next song they'll channel the Rolling Stones from the early 60s. In another song, they'll bask in the warmth of psychedelic rock and then another get a little gritty with heavy surf guitar licks. The lyrics make me laugh out loud. Not that their funny, but inside jokes about Los Angeles or San Francisco or Brooklyn. Hipsters poking fun at hipsters. Reminds me of Beck on Xannax. When I listen to Foxygen, I get flashbacks of sitting on a crowded Muni bus in San Francisco and have visions of sad hipsters staring at their iPhones while the Muni crawls up steep hills.

Email ThisBlogThis!Share to TwitterShare to FacebookShare to Pinterest
Tags Music