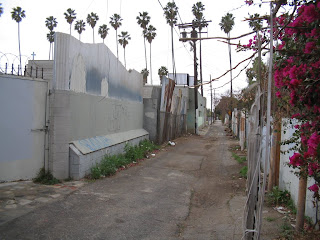 Quiet. Mostly quiet. The alleys were still at that tranquil time of the morning just after the dawn broke and the Carolina-blue sky was scattered with the last remnant of dissipated chemtrail.

The calm before the storm.

The familiar echo of rattling empty bottles drifted down the alley. The constantly clanking indicated one of the can fairies had hit a jackpot. Previous dumpster hunters somehow missed the buried treasure or that particular fairy had the perfect timing because someone had just taken out their trash from the previous night's festivities. Competition for empty beer and soda bottles is fierce in this neighborhood between couple of professional recyclers with vehicles, a guy on a bicycle with a large blag hefty bag, the mumbling old toothless guy who wore a smock and pushed a grocery car around, the Mexican couple who wore gloves and used a long wooden walking stick to poke around the bins, not to mention the random junkie or two who stumbled through looking for who knows what.

Aside from the random jackpot winner (who I never saw but heard somewhere in an adjacent alley), I did not see anyone this morning. On a typical early morning (early even for early morning people), in the first mile or so I'd pass two types of people: joggers and dog walkers.

Almost 90% of the time, when I came across someone running, that jogger was a middle-aged female in dark workout clothes. Meanwhile, 90% of the dogwalkers wore their pajamas and more than half the time they'd be smoking a cigarette. I like multi-taskers. Juggling two birds with one stone. Or something like that. The dog owers were friendly and said hello outright (or some derivative a a greeting) or nodded 90% of the time, while the joggers never ever acknowledged me. Maybe they were traveling too fast, or simply too stuck up to bother.

If I went for a walk an hour later, the activity of the side streets picked up. The normal weekday hustle and bustle. You don't have to set an alarm because around 7:50am every morning you'll hear the first leaf blower from one of the neighbor's gardeners. Over the next four hours, the neighborhood is polluted with whirling buzzing annoying sounds of leafblowers and weed whackers, which fill every nook and cranny of the alleys. Every block has at least one crew working on a lawn. Sometimes you'll see two or three! You can't wander down a single street without seeing yard work. Appearances are everything. Substance is overrated in these parts. The perfectly manicured lawn projects perfection and success. Without the meticulous work from $5/hour illegal immigrants, then the neighbors would have to actually do their own gardening.

The mechanical sounds of the landscapers' collective toil competed with the overwhelming screeching and groaning from garbage trucks. Trash pickup happens before the dawn when the vampires are scurrying home before sun comes up, but sometimes they get behind schedule. When trash collection coincided with the first wave of morning rush hour, you were guaranteed to experience an ugly encounter.  The behemoth trucks blocked the side streets (two lanes) and if you got stuck behind one, then you were screwed until they moved to a space where you might be able to squeeze past them, otherwise you're stuck until they're done with the end of the block. The truly impatient ones turn around and go another way. The selfish dickheads refuse to back down and honk their horns with reckless abandon. Without fail, there will be a self-absorbed suit behind the wheel of a foreign model car (which is worth more than the yearly salary of the trashman) who will honk loudly and roll down his windows to curse out the truck. Nothing gets garbage men fired up more than sticking it to BMW-driving douchenozzles. The more you honk, the slower they go. The trashman don't give a shit. They're union jobs anyway. Sometimes they'll create a bottleneck purpose just to rile up the sheeple. Being a commuter is tough enough, but do you need more anguish by getting caught up as collateral damage in a pissing war between a BMW assclown and a bitter trashman.

Garbage trucks grinding. Honking horns. Road rage. Leaf blowers. Bottles and cans clanking off each other. Maybe even a few birds chirping. Morning weekday sounds. I prefer the calm moments in the hour before all of that maddening bustle begins. I drowned out all of those negative sounds of commerce, industry, and scavengers. I plugged my ears and listened to music. Nothing special. Anything was better than hearing the nauseating cacophony of West L.A. side streets and alley ways during the peak of morning rush hour.
by Pauly at 3/14/2013 05:47:00 PM