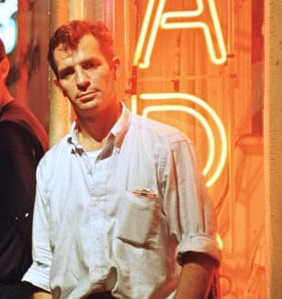 "I wrote the book because we're all gonna die."

Jack Kerouac wrote those words in On the Road. I'm writing about Jack today because it's he was born on this day 91 years ago. Jack lived a brief life because he died at age 47 after drinking himself to death.

The constant wandering Jack did in his late 20s became the focal point of his novels including the one that made him super famous -- On the Road. In post-WWII America, it was much easier to hitchhike on the interstates and make a little money go a long way. Jack crossed the country numerous times in the late 1940s and he extensively wrote about what he saw and experienced. His novels became a snapshot of America in the late 40s and early 50s before it morphed into a consumer society.

The road became a constant source of inspiration early in Jack's life, but it was a direct root of pain later in life. The wandering adventures fired up Jack and he tried to write down every detail of every moment when he was living life on the fringe.

The Beats tried to make living an artform. A few succeeded particularly Neal Cassady. I can only imagine if Neal were alive today. He had more gravitas in his little pinky than the entire Kardashian clan. Neal was born in the wrong era. He became America's first "reality show" all because Jack took the time and energy to jot down every meticulous detail about the Neal Cassady experience.

Jack did too much living on the edge. The edge is what made him and formed his outlook on life, but the edge what destroyed him. Later in his life, those epic journeys and frenetic moments during his seven nonstop years on the road became a rampant source of melancholy. The excitement of life was no longer there. He could never replicate the boundless energy of America in the late 40s and the fly-by-the-seat-of-your-pants frenzy of traveling with Neal Cassady. The characters were no longer alive inside his head; Cassady died in Mexico walking along the train tracks and Ginsberg had embraced his fame as a hippie icon and elderstatesman for the 60s generation. By the time Jack hit his 40s, the openness of the American frontier started to evaporate and regional differences were getting smoothed out. The music changed... his once precious jazz was pushed aside by the surging popularity of rock and roll. And when Jack tried to make art, well if empty bottles of hooch did not give him writer's block, then the hipness of his words got swallowed up by the chase pack and Jack struggled to compete with a new batch of writers he inspired.

I was a freshman in high school when I read On the Road for the first time. I really didn't get it then at age 14, which was expected because it was the late 80s when I didn't fully appreciate the written word and spent more time on video games than delving into literature.

I re-read On the Road again one summer during college and finally got it for the first time because I had started traveling a bunch for the first time in my life. During the summers, I lived in my fraternity house in Atlanta and we did not have cable TV to zone out in front of, so I spent a lot of nights sitting on my porch reading books. During the last two years of college, my friends and I devoted a significant amount of time traveling throughout the South following the Grateful Dead, or taking roadtrips to New Orleans or Biloxi (to gamble on the river boats), or down to the Florida panhandle for other festivities. Atlanta had its own flavor, but I really didn't get to see the real South until I left Atlanta and wandered around. I can never thank the Grateful Dead enough for luring me out of the classroom and egging me to get on the bus and head onto the open road to see America.... to see my future. After college, Phish helped shape my world view by getting me out and about on the road and even got me to see Japan in 2000. I traveled a shit-ton across America because of those two bands. My love of their music coupled with a passion for travel made touring with both bands the perfect synergy. I would not be here today without those intrepid experiences.

I re-read On the Road a third time when I had just moved back to NYC after college in the mid-90s. I moved in with my girlfriend, who was a chronically-depressed artist and two of our roommates were drag queens. We lived around the corner from the Chelsea Hotel, or just seven blocks from the West 20th Street apartment were Kerouac penned the original manuscript. My ex-girlfriend was obsessed with the fact that Jack Kerouac was madly in love with Neal Cassady. She underlined all the passages in On the Road (and a couple of other Jack's novels) she thought alluded to Jack and Cassady's potential love affair. Her obsession with it freaked me out more so than the reality of their peculiar and dynamic relationship. I didn't get much out of that re-reading of OTR, but my ex-girlfriend turned me onto his other books and I devoured Dharma Bums, Desolation Angels and The Subterraneans. It didn't even get half-way through Dharma Bums before I declared it was better than OTR. After reading almost novel Jack penned, I can safely say that Dharma Bums is not only my favorite Jack novel... but it might be his best.

I picked up On the Road again when I lived in Seattle in the late 90s during the post-grunge era. I was closer in age to Kerouac at the time he wrote the initial manuscript, so I felt as though I could identify a little bit better. I had just driven across country with my buddy Senor and we moved all my shit from Brooklyn to Seattle in a shitty Chrysler LeBaron (not quite Jon Voight's car, for you Seinfeld fans).

I cannot recall when I re-read On the Road again next, but it happened sometime between 2003-04. I re-read huge chunks of it from a Barnes and Noble on the Upper West Side when I was super broke and didn't have a job, so I went into the bookstore to kill time and read. When I started to play poker in the underground cardrooms around NYC, I often popped into Barnes and Noble while I waited for games to begin (near Union Square or on 22nd Street). I flipped through different poker strategy books and got lost in different sections of the megastore, but I'm sure I read 10-20 pages from OTR a couple of instances while waiting to play poker.

A couple of years ago, I acquired an audio book of On the Road. I listened to it on a long flight to/from Australia. I was bummed I didn't get the one with Jack Kerouac reading the entire thing.

One of the better things about the introduction of YouTube was digging up old clips of Jack Kerouac appearing on TV shows, like the time he was shitfaced on the William Buckley show or the time he was super uncomfortable reading passages from On the Road on the Steve Allen show, as Allen pecked away on the piano.

Speaking of YouTube, I cam across a lecture from a well-known Ivy League school that discussed On the Road. Holy shit, it was a terrible class. I'm not a professor and barely stayed awake in my English classes in college, but I could have done a much better job explaining On the Road to these kids. Sucks that their view of Kerouac, the beats, and post-war Americana was shaped by a professor who had no idea what she was talking about.

I recently saw the film version of On the Road. It wasn't all that, but you get to see Kristen Stewart's nipples. At least the set designer did a great job making everything look like the late 1940s.

You can listen to the audiobook of On the Road here (ironically on YouTube)...