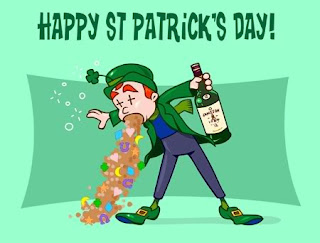 It's St. Patrick's Day, which feels strange on the Left Coast, especially in Los Angeles, which lacks neighborhood bars with a mixture of well-season alkies and working class folks having a beer at the end of an arduous day at the grindstone.

I grew up half-McCatholic in an Irish and Jewish neighborhood in the Bronx, but every day was St. Patrick's Day when both your parents are alkies. When I was a kid, my catholic grammar school gave everyone St. Patrick's Day off from school, presumably so we could go downtown to watch the parade. Most kids and their families actually did that. I went to the parade once or twice back when it was a legit parade and a celebration of Irish culture (before it got hijacked by booze companies and transformed into a drunken, puke-inducing wild rumpus), but after you've seen the parade once, it's not all that special. Instead of going to the parade on a day off from school, I welcomed the opportunity to sit around and play videogames.

In high school we hung out in the crowd along the parade route on Fifth Avenue and knocked back tallboys out of paperbags will sitting in Central Park.

In college, we were always looking for an excuse to drink and always looking for an excuse to roadtrip out of Atlanta. My buddy Darin and I drove down to Savannah once year at the last minute. It was a spontaneous trip that started out as a half-joke during lunch but then manifested in a full-blown roadtrip. We drank up and down River Street. Vendors and bars sold you a huge green plastic mug for $5 (filled with beer) and then you got refills for $2 at any of the bars or beer wagons on the street. River Street was transformed into Bourbon Street with a Mardi Gras-like festive atmosphere, except it you wandered through a green and tons of binge-drinkers from age 17 to 107.

St. Patty's Day in Savannah is a serious adventure and still remains one of the Top 10 greatest parties I've ever attended. This post isn't doing it justice mostly because I don't remember much. The frantic sojourn in Savannah was a huge drunken and foggy blur. I remember starting at one end of River Street and buying my first beer and then it's all fuzzy. We ended up passing out Darin's car like at 2am, parked on some random side street in Savannah underneath a huge tree with Spanish moss draped over us like tinsel and confetti. I woke up at 6am clutching an empty and sticky green mug and the super strong Georgia sun baked my brain. My head which pounding because of a wicked hangover and I had to take a leak and ended up opening up the car door to either vomit or piss -- whichever came first. I didn't blow chunks but urinated on the sidewalk underneath the huge tree with the Spanish moss tickling my face. It wasn't my best moment, but I felt 10,000 times better after reliving myself of gallons of Killian's Red.

I moved back to NYC after college and worked at the museum with a bunch of ex-cops and on St. Patrick's Day, we drank at an old man's Irish pub on the Upper East Side before I left the party early to hang out with a bunch of stoners and we wandered over to Central Park to smoke blunts.

I worked a couple of St Patrick's Days behind the bar. One shift (and it was actually 2/3 of a shift) was the most cash I ever made in the shortest amount of time in my life (that did not involve gambling). While another hellacious shift was one of the most difficult and labor-intensive work experiences I ever had (and this includes a stint when I dug ditches and graves in a Georgia cemetery). I often struggled to find steady work as a bartender in NYC, but every bar in the five boroughs was looking to hire extra bartenders for St. Patty's Day. It was the hugest day of the year if you owned a drinking establishment and tavern owners from Hell's Kitchen to Bensonhurst needed as many fresh troops behind the bar as possible to keep all the parade revelers, and thirsty local Irishmen, and amateur-alkies happy and drunk and drunk.

You view the world differently if you've ever tended bar because you get to be on the sinister "pusher" side of alcoholism because you're hustling hopelessly addicted souls a few bucks at a time. The average customer is riddled with serious life problems, yet they are avoiding dealing with those issues by hiding out in a bar. In one sense, you're giving desperate and lonely people somewhere to go and nurse their wounds, but at the same time, most of the time you're just enabling them and providing shelter from the slings and arrows of the real world. Being a bar owner is tough on your karma because you profit off of other people's misery. You flirt the fine line by creating a place where people can relax and kick back with a few drinks, or taking advantage of our society of lowlifes by siphoning off the last bit of their dignity one shot of whiskey at a time.

In the 21st Century, St. Patrick's Day is just like every other holiday that has become over-hyped by the media and hijacked by corporations whom profit from a seasonal money grab. Beer companies don't give a shit about Irish or Mexican heritage, yet they'll go out of their way to promote Cinco de Mayo or St. Patrick's Day. Hey, it's in the best interest of the wine-booze-beer-spirits-industrial complex to create as many holidays -- both real and fabricated -- as a means to profit off of insane amounts of liquor consumption.

We need at least one of these booze-drenched holidays once a month. A few months are already taken with known binge-drinking holidays (New Years, St. Patrick'S Day, etc.), so we need to manufacture four or five new ones.

Might I suggest morphing Talk Like a Pirate Day with Copious Rum Consumption Day, and then everyone will get dressed up like pirates and wear eye patches and get blind dunk on rum concoctions. Or maybe celebrate hurricane season in September with Hurricanes (a New Orleans' inspired cocktail that incorporates a shit-ton of rum -- Bicardi, dark rum, and 151 -- mixed with both orange juice and cranberry juice, with a splash of grenadine).

I'm surprised Coca-cola hasn't teamed with with Jack Daniels to create a national Jack-n-Coke Day in April, and for those of you watching your figures, you can drink Jack-n-Diet Coke. It could be a special celebration in which people drink buckets of soda and whiskey and then you can close off huge sections of the city and let people fight and maul each other to the death in a royal rumble street brawl. It's like the Running of the Bulls except you're trying to survive and outrun several hundred volatile miscreants completely tanked on whiskey. Vegas will be able to offer up betting odds and you do a Pay-Per-View livestream to watch the carnage while hosting your own Jack-n-Coke parties.
by Pauly at 3/17/2013 03:33:00 PM