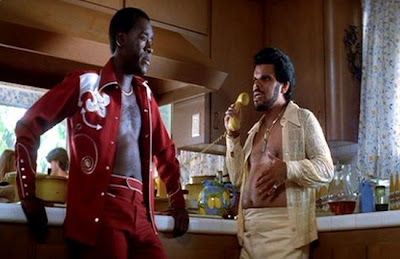 According to Luis Guzman, no matter what you like, it is automatically cool because you like it. The flip side is that whatever you don't like becomes uncool by default. That's cool with me but it's not cool with other people. Unfortunately, the biggest pains in the ass want to feel super extra special, which means everyone must agree to what they determine is cool or not. When I meet those types of people, I usually feel sorry for them because they're drowning in self-hate and insecurity.

Those ingredients for low self-esteem crop up when you lack confidence about something you're doing and you get dizzy by obsessing with what other people think it is cool or uncool, when almost all the time those people: 1) don't think about it, and 2) if they did, they don't give a shit.

Yet you obsess over what the arbiters of cool think and stress out how they are silently judging you when they're not, so you're just being a paranoid martyr instead of shrugging it off and living life. The next time you get freaked out about something, just think about Luis Guzman saying: "Who gives a fuck... if you dig it, you dig it. It's cool, man."

You should never worry about what other people think, but if your friends act like assholes, then you're in a tough situation. Like your friends who boss around waiters and waitresses like they are their own personal slaves. It's such a turnoff when you see your close friends treat service people like shit. That's such a serious thing that I once broke up with a woman because she was a total bitch to the waitress.

Sometimes you butt heads with friends over what they think is cool. Everyone has that one your buddy who think he's hot shit because he thinks it's the coolest thing in the world to hit on every chick in a bar, yet he's the only one who realizes how incredibly uncool it is and you get super uncomfortable because everyone else thinks you're cool by default because you showed up with the dickhead? It's like being Jon Favreau who cringes every time Vince Vaughn opens up his mouth in every scene from Swingers.

Back to the coolness thing and why I really don't give a shit about the little things (which has helped me focus on the more important things). I learned to live without hangups on "cool" really early on, so I didn't make too many mistakes looking like a moron in the search of cool. Sure, like every other clueless and angst-ridden teenager, I engaged in some foolish pursuits in high school or college (mostly more musical mistakes than fashion gaffes), but that had less to do with trying to establish an image of coolness than trying to get laid1.

Luckily a couple of handfuls of magic mushrooms helped shed some insight into the uniqueness of individual souls but the collective consciousness of life. After some of those experiences, it was easier for me to embrace the philosophy of 1) not worrying about what other people think, and 2) pursuing the things that give me a greater sense of happiness and accomplishment.


1. I once went to an Ani DiFranco concert because I thought that would be a shortcut to bedding a girl I really liked, but of course, she liked other girls. That could be an entire blog post, or an entire novel in itself. Or then again, Kevin Smith did a better job telling a similar story so go watch Chasing Amy instead.