Agony, Sorry and False Hope (a.k.a. Life As a Jets Fan) 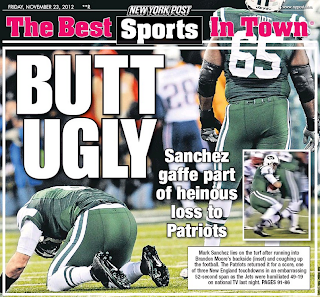 I put the misery out of my mind for a couple of months. The malaise of being a Jets fan is like a seasonal depression. Once the playoffs began, the Jets no longer existed. I didn't have to think about the Jets over the last couple of months and blocked the past season out of my memory. I did not want to have to re-live the misery. But since the draft is tonight, it was impossible to ignore all the chatter. I was on the verge of blowing the entire thing off until I watched the latest 30 for 30 documentary about the 1983 NFL Draft and the agent who repped both Dan Marino and John Elway.

Elway was a golden boy from the get go and got picked #1 (by the Baltimore Colts). My hometown NY Jets passed on Dan Marino and picked an unknown QB from UC-Davis (a Division II school) named Ken O'Brien who excelled during his workouts and dazzled scouts with his arm strength. at the time, the word on the street was that Marino was a cokehead. His senior year's stats were nothing compared to his stats from his junior year. Everyone suspected he was on the sauce. A couple of local cops looked into the story but they came up empty. The school gave Marino drug tests during his final year and he passed them all. The truth was that Marino was not a cokehead but it was impossible to quell those rumors so his stock dropped to the back of the first round. Even the Pittsburgh Steelers passed on Marino. It's hard to fault the Jets. They went with their (wrong) intel and it came back to hurt them because Marino is fucking Marino. Kenny O'Brien had a good career, but it wasn't anything like Elway's or Marino's, so Jets fans are haunted with another memory of "what if we picked Marino instead of O'Brien?"

Nicky saw part of the documentary and was shocked the Jets passed up on Marino. She had no idea about the Jets horrid past with their draft picks. For every one that turned out a superstar, they had a dozen of busts. This morning I saw a montage clip of Jets fans booing their first round picks from different drafts from the 1980s and 1990s. It's funny in many ways, but incredibly sad in others. It's painful to watch because you see the franchise make horrible pick year after year after year.

I wrote something about the utter torment Jets fans must endure to cheer on a team that let's us down year after year after year. Check out: Lamentatons: The LOL-Jets on Draft Day.You can see the montage video with all the Jets' fans booing their picks.

Sports is supposed to be uplifting and inspiring. It's supposed to promote teamwork and overcoming obstacles and pushing yourself to achieve something you never thought was physically possible. But when your team sucks, like the Jets do, it's hard to get inspired by a bums of morons running the team into the ground. I'll spare you all of the Jets bad beat stories, but I sincerely doubt they can turn the franchise around with this upcoming draft. It's nothing except false hope.
by Pauly at 4/25/2013 04:20:00 PM