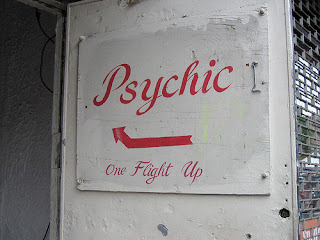 There's real life reality and then there's your film version of life playing on the big screen in the few inches of space inside your head. Sometimes that film is distorted and dark or gloomy instead of resembling a much brighter reality, or sometimes the film is too picture perfect, or an absurd fantasy world that it lacks any resemblance of reality.

Every once in a while, there's a BBC wildlife documentary playing in my head narrated by David Attenborough. Sometimes it's like a really really bad SNL sketch put on at the 12:55 slot. About once a month, I have Marv Albert narrating my life. Most of the time it's one of those bleak black and white Bergman existential visual exhibitions like Winter Light or Glass Darkly.

I read a story once about a dozen women from the Junior League in some Midwestern city who got bilked out of almost a million dollars by a psychic. They thought she was a Haitian priestess who could talk to their dead relatives and peek into their futures. In reality the woman was a con artist from Chicago who was a washed-up Motown back-up singer who went to jail briefly in Florida for writing bad checks. She reinvented herself as a clairvoyant, spoke with an outrageous accent and used voodoo trinkets to create an air of mysticism. Over 18 months, the psychic extracted approximately $400,000 from one woman who had weekly seances with her deceased husband and dog.

I always wondered what went on in the heads of those well-kept women who got conned. They wanted something to be true so badly that they created an entire white-washed version of reality inside their heads. They were vulnerable and perfect marks. The psychic's only problem was greed. She could have made a big score then bailed, but the more popular she got, the more and more referrals came her way. She was getting too greedy. She should have walked away months earlier but kept pushing her luck. Sometimes when a hustler finds an easy mark, they get sloppy and lose their mental edge and think that the mark is an endless source of money. Or they think their con is so foolproof that they can't caught, but eventually every hustler meets their demise. In this case, one of the husbands discovered his wife was donking thousands of dollars to some fake seer named Lady Ursula.
by Pauly at 4/03/2013 11:34:00 PM