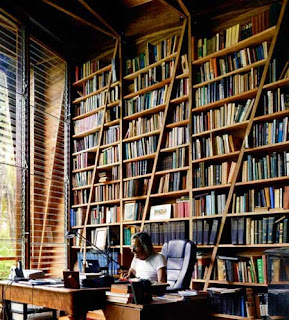 It was almost 12:30pm and I opened up my laptop for the first time. That is super rare. I'm on my laptop from the moment I wake up until the moment I go to bed. But after the championship game ended on Monday night, I had barely been on my laptop over the next 40+ hours. I think I spent about an hour on Tuesday night on the machine and managed to scribble down a few half-baked thoughts before I felt the urge to close it and continue this mini-break.

I prefer to read as much of book as I can in one sitting, and then I like to polish it off as quickly as possible. Sometimes I read four books in a week. Sometimes I read four books in a month. It depends on how much free time I have, but the last year or so has taken on a specific pattern -- I binge read a book a week and then juggle eight to then other books in which I probably finish half of them. So over a month's time I probably read eight books -- four quickly and the other four were a labored effort that took a week or even two weeks trying to read it in small batches.

I'm the type of person who will rather devote two full days to finishing off a book, then to read it slowly a few pages at a time. It's just my personality. I can't wait for Arrested Development to dump all of their new episodes onto Netflix. Just like House of Cards, I will devour it all within a 48 hour period and sit on my couch toking hashish and watching everything in a nonstop bender like a true entertainment junkie. I'm the same way with books, or at least, I try to be.

I mean, I'm reading two types of book at any given time. The first category is a book I pick up and won't stop until it's done, sometimes taking one day (if I'm in a good rhythm I can read 50 pages in an hour). The second type is a book that I'm slowly reading over a couple of weeks. Sometimes the subject matter is too intense or too complex or something I have to re-read or look up stuff to understand what's going on, so I cannot take in more than an hour a day with that particular piece of work. Sometimes I juggle two or three books like this at a time and it feel more like college in which you read a few chapters of different books for different classes. I feel like those are books that don't completely enrapture me, but I feel obligated to read it for work reasons or for academic reasons or sometimes it's out of stubbornness if I committed myself to that book and invested time and emotion into it, so dammit I'm going to finish it!

I have piles of books I started to read but never finished. I used to feel bad about those aborted attempts. I felt like I was dishonoring those authors. But mostly, I felt guilty that I wasted my time doing other useless shit and I could have devoted more time to those books. Every once in a while, I actually finish a book from the start-stop pile and I feel even more guilty at the end for not finishing the book sooner and chastise myself for giving up on a book that had more promise than I initially thought.

Then again, a great story is a great fucking story. You want to read about it in one sitting. If any of those other books had something that hooked me in, then it wouldn't have gone into Purgatory and banished to the unfinished pile. As an author, your goal is to write a book that is so good that the reader doesn't put it down. Then again, I think about these massive books that were 800 or 1,000 pages in length and think... dear God... it's too daunting of a task to read those Mt. Everest of books. That's why I struggled with Infinite Jest. That's why I kind of which DFW broke it up into a series of three or four books, that way he could have spread that story out over a decade in a manner that even the most voracious readers could chew on without choking.

What I liked about Jack Tripper Stole My Dog was its size. It is more of a novella than a novel. The investment that readers put into it is minimal. So even if they fucking hate it, at least they can say... it wasn't that much of a waste of time.

In the end it boils down to this... I'm eternally grateful if you give me your devoted attention for a couple of hours, so I'm going to tell you a crazy, twisted story about some fucked up people that may or may not resemble people in your own life.

In the end it comes down to this... it's impossible to compete for people's attention, especially the written word. It's a form of entertainment that requires some usage of your brain. TV and sports is an easy choice because it does not require much effort. That's when when people come home at night after a long day of work or a long day dealing with their kids, so they want to zone out and have a smoke or a drink or just bask in the warm glow of the TV in the dark. The last thing they want to do is bury those nose in a book after a long day of work/kids, and the ones that do want to read, end up reading right before they go to bed, usually for the sole reason to make their eyes tired and they can fall asleep faster.

Authors spill their blood on the pages and they don't want to be the book on people night stands that puts them to sleep at night. You want to write page turner or the type of book that readers become so engaged in it that they forget to sleep and stay up all night reading it. Or better yet, you write a book that is so powerful and incendiary that the moralists are burning your book in a bonfire that is three stories high. Then again, at this rate our society is devolving into, we're probably 10-15 years away from public book burnings because knowledge is power and people get knowledge from books, where as they get brainwashed by the TVs.

Anyway, I got sucked into reading Open by Andre Agassi. I'm not a tennis fan but I had to read Agassi's autobiography for a work project. Several friends had recommended the book to me -- for different reasons -- but every one of them was right. I really enjoyed it and couldn't put it down. I spent the last two days engrossed in the book. I was even more excited to learn that one of my favorite authors, J.R. Moehringer, helped Agassi write the book. Even if you're not into tennis, the tennis scenes are super short and it's really am enthralling yet quick read.