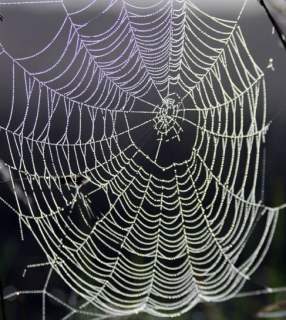 I killed a spider. Quietly. Like a ninja assassin. I didn't remain silent to sneak up on the spider, rather, to not wake up my girlfriend. She hates spiders. HATES. They freak her out. She screams like a little girl and then I swoop in to the rescue and save the day.

The spider knew I was there because it could feel my heart beat. It knew I was close. I totally missed it when I stepped into the shower. I first saw it in the upper corner. I looked up and saw something I thought was a stray wire. After the water got out of my eyes, I saw a pretty big, nasty spider with long-ass legs.

If Nicky saw it, she'd freak out. Go crazy. Make a scene. She hates spiders.

I finished my shower and when I was done I made sure to not make a big fuss. Nicky was still sleeping so as long as she was still in the bedroom, she would never have to know about the spider. All I had to do was liquidate the pest and harmonious life could continue.

But killing spiders is bad, according to Buddha. We're supposed to cherish all life. But then it's cool to eat cows but not kosher to kill spiders. I don't get it. Life is hypocrisy.

I think one of the primary reasons my girlfriend has stuck with me through the years is my willingness to kill whatever pest freaked her out. When we lived in San Francisco with Halli, I pulled double duty and had to remove pests whenever either lady came upon one. It was pure comedy for me. Sheer terror for them. At least I had some purpose in life. Just when I thought I was aimless, directionless, rudderless, and not feeling good about any of my petty accomplishments, at least I can add arachnid slaughter to my resume.

In this case, I used a baseball bat and let the spider crawl onto the end and then shook it off into the toilet and flushed it down the drain. It could still be alive somewhere in the vast Los Angeles sewer system, or maybe it was breakfast for whatever rats were living down there.
by Pauly at 4/24/2013 04:20:00 PM