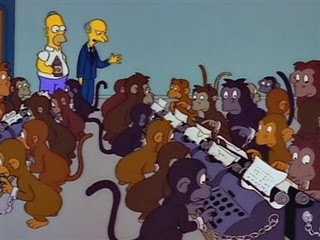 A friend, stuck in a writing funk, flat-out asked via text message, "What's the secret?"

I answered quickly: "Not to sound like a stoned Yoda, but either you do, or you don't. There is no try."

A blank page is intimidating if you let it. I look at blank canvases and all I see is color combinations. When I look at a blank word document, I see a huge ocean that I have to swim across in order to tell a story. It's daunting. It's scary. But that's the way it is. If it was easy, then everyone would be doing it. Simply put...  I open up a blank page (for blogger or M-Word) , take a deep breath (or toke), close my eyes, and then puke words.

That's what it's all about. Puking words. I have to figure out how to expand that 2-word sentence into a 300 page how-to book so I can sell it for $20 to lost writers with a serious block or some other impediment.

That's the secret. Puke words. It's not really a secret. It's all puke, no talent. You just have to have the courage to puke... everywhere. There's so much puke out there that you don't have to be good, rather you just have to be not the worst puker out there. Sounds sad, but it's true. The standards are so low that even I can be exceptionally mediocre enough that people actually pay me money to puke words and suck less than everyone else. That pretty much described my entire career in poker. I might have been awful at times, but I was less awful than the average awful. That's how I paid my bills. That's how I continue to pay my bills.

It says "writer" as the occupation on my tax returns, but I know better. It should say "word puker."

Every morning I have a free write and its essentially free puke. For the Tao of Pauly, I used have a set time (15 minutes) and go for it. Blog puke. If I have extra time to put more into it, I'll give it twenty or thirty minutes. Sometimes I'll take a second pass or even rip through a rare third draft. With a few exceptions (David Foster Wallace essay or The Accidental Coach), the structure of Tao of Pauly is like a late-night set at a seedy jazz club. It's dark and smokey and lots of improvisation while trying to drain out the background chatter of uninterested drunks.

This corner of the web is always evolving. Looking back to when I first created Tao of Pauly, I realize what I used it for in 2002-03 was what I use Twitter for today. Along the way, it has morphed into longer form writing although it was seriously neglected during the peak years for Tao of Poker 2006-09. Just when I thought I had figured out what to do with this space, some weird things happened in life, and I say this like a lot of things I started in my life -- it became a burden -- and the last thing I wanted it to become. I took some time off and came to the realization that this is and will always be the most important soap box for me, or the perfect stage for me to puke words five days a week.

Seriously. That's it. That's the key to success. Step up to the laptop, open up the faucet and let the words flow through the tube-like fingertips. When it's done, turn off the tap and hit publish. Most of the time it's horse crap. But every once in a while it's edible puke. I'm very fortunate you want to spend a few minutes every day reading this tripe. Or, spending a half hour once a week on Monday mornings catching up on the last few days of posts while procrastinating. Or most likely in this modern age, you're problem reading my shit while you're taking a shit. Seems fitting. I always said Jack Tipper Stole My Dog was a great bathroom book. It wasn't a long-ass book so most people weren't too cranky with the ending. When you invest a significant time in a piece of work, you want a bigger pay off. The shorter the story... the smaller expectations. That's why Twitter is so easy. That's why Twitter is a cop out.

Anyway, I puke words. Other writers struggle and it's like drawing blood. Squeezing blood out of their soul one excruciating drop at a time. Don't fret over blood, just shove your finger down your throat and hurl away.
by Pauly at 4/11/2013 11:11:00 AM