German Speed and the Early Beatles

I couldn't sleep and watched a little bit from a Beatles documentary. I was particularly interested in their early days after they got a job working in Hamburg, Germany in August 1960. Over a period of 15-16 months, the Beatles played on and off all over Hamburg before returning to Liverpool, England.

The Beatles didn't start out as the "fab four", rather this incarnation had five guys and Ringo was still playing with a more popular band. After the Germany run, the bass player (Stu Sutcliffe) returned to art school (Paul McCartney took over on bass) and the drummer (Pete Best) was replaced by Ringo. 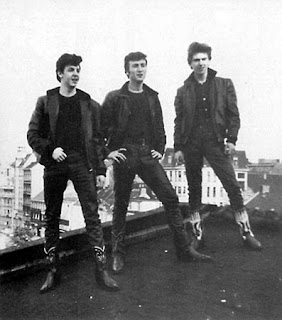 In the early 1960s, Hamburg was more like Amsterdam is today. It was only 15 years after the end of WWII and Hamburg had become a destination for debauchery and raunchy sex. The Beatles played in different strip clubs and brothels, eventually paying their dues and working their way up the proverbial ladder. They started out providing background music for strippers. After a while, there were good enough that they could play one of the bigger venues in town (almost 2,000 seats). More importantly, they finally graduated from titty bars and whore houses.

Why was Germany vital? For one, the band played nonstop seven days a week. If they didn't have any chops yet, they eventually developed it in Germany. It's that whole 10,000 hours rule about it taking that long to become an expert at a specific task. God knows how many sets. They played four or five sets a night (and made around $25/week each). They played from sundown to sunrise on most nights and eventually mastered their instruments. They used their money to buy cheesy leather jackets and American-made cowboy boots. They looked like hoodlums or extras from a greaser motorcycle gang. I guess they had to look a little tougher if you were playing for a bunch of drunks, who did not take kindly to a dainty and poncy atmosphere.

The band slept in a store room next to a bathroom that old German hookers (both regular and transvestites) used regularly. Yep, every band has to pay their dues and the Beatles suffered with the constant aroma of trannie urine.

Lennon and McCartney had not yet become a songwriting dynamic duo. The Beatles played covers. Nothing but covers. But the later it got in the night and the emptier the clubs got, they were able to play their favorite covers -- mostly delta blues -- from legendary southern bluesmen. They even tossed a few Elvis covers into the mix. Those Germans fucking loved Elvis.

The band was jacked up on speed the entire time in Germany. Heck, the Germans helped invent speed. The club owners gave the band Preludin tablets (a.k.a. Prellies) which helped keep them playing late into the night. There was no Red Bull in 1960. It had yet to be invented. An energy drink for them was a glass of warm beer and a small Prellie pill that put a bunch of pep in their steps.

Everyone has to start somewhere. The Beatles got their humbling break in Germany by cranking out frantically fast blues covers for tourists, while crocked to the tits on speed. You net your ass when they finally returned to England, they were grateful for the chance to not have to bunk next to jaded German whores.
by Pauly at 4/23/2013 11:11:00 PM

Email ThisBlogThis!Share to TwitterShare to FacebookShare to Pinterest
Tags Music, The Beatles