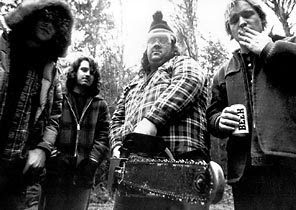 TAD was a band from Seattle that was spawned in the late 80s and lived until the late 90s before they broke up.  They were fronted by a guitar player and lead singer named Tad who looked like a 20-something, head-banging, stoner-version of Tony Soprano.

Yes, I'm forcing you at gun point to hop into the Tao of Pauly time machine where we jump through the wormhole and visit the early 1990s and the Pacific Northwest. The loudest band in Seattle at the time was TAD, and this was still a few years away from the entire city getting turned upside after Nirvana, Pearl Jam, and Soundgarden hit the airwaves and blew up the Northwest. TAD was one of the more popular bands during the pre-grunge era and played an intense and loud version of thrashy-punk-metal. They never expected to hit it big, but they loved music and wanted to have fun, so whenever you went to a TAD show, you expected to see four dudes who got shitfaced backstage then stumbled onstage and rocked out as loud as they could. Their goal was to make their fans shit themselves. They wanted to play a "brown note," or a note so loud, dark, dirty, nasty and explosive that it would incite uncontrollable bowel movements.

In 1989 or 1990 (I'm too lazy to look it up), TAD co-headlined a European tour with Nirvana, but Kurt Cobain's band opened for TAD on most nights. The two bands shared a van and zipped around Europe together. Nirvana was a newer band and sort of like TAD's younger brother. Nirvana lacked a significant presence overseas in the U.K. and Germany, whereas TAD had been around the block a few times. The indie press and some underground radio stations in random countries took a liking to TAD, which helped generate a bit of buzz for the Seattle's heavy metal troubadours. Music writers (from England to Germany) had keyed in on TAD because they were the opposite of those cheesy hair bands from the 80s. I'm sure the Euro press were fascinated with the heaviness of the music (loud, bloody ears, bong-rattling Pac-metal) and the heaviness of the lead singer Tad.

Someone with a sense of humor from Sub Pop, TAD's record label from Seattle, had tweaked the band's bio which is why writers referred to Tad as a former butcher, while others pointed to his career as a long shore fisherman or even a logger. In reality, Tad was a guy who looked big enough to play offensive lineman for the Washington Huskies, but he had magical fingers and could shred the guitar like Stevie Vai. The rest of the band resembled pretty much every other band from the Pacific Northwest -- long-haired stoners who look like they slept in their dirty clothes.

TAD was loud, chaotic, boisterous, raucous, and deafening. Did I mention how loud there sounded? There was heavy metal and then there's was fucking TAD, which was 150x louder than the loudest metal band you ever heard. Bloody ears. You can't listen to TAD for more than a set before you're ears start to bleed and you have a throbbing headache from your brain getting smacked up against the inside of your skull courtesy of TAD's thunderous sound.

Most of it was an act. TAD was never a butcher, nor a psychopath with a chainsaw. He was originally a drummer who decided he wanted to learn how to play guitar. He teamed up with a guy names Kurt, who was an English major and a poet. Kurt's penetrating yet catchy lyrics and Tad's vast knowledge of music theory gave TAD a solid foundation. Throw in tons of booze, drugs, and Gen-X cynicism and you have a perfect recipe for comedic angst.

Here is the documentary about TAD titled TAD: Busted Circuits and Ringing Ears that I caught the other night. This doc chronicles TADs rise and fall including a ton of bad beats like getting dropped by a couple of record labels and getting sued by a couple of Jesus Freaks...


If you dig the last wave of cool punk-mental (none of that hair band crap, I'm talking speed metal, punk thrash from the late 80s and early 90s), then check out Hype!, a documentary by Doug Pray (I embedded the 'Hype!' video in this previous post), who did an excellent job explaining how Seattle went from a sleepy town to the epicenter of grunge overnight during a media blitz, bombardment, and money grab that the city had not seen since the original Alaska-Klondike gold rush in 1898-99.
by Pauly at 4/19/2013 11:34:00 PM