Back to the Butcher Shop 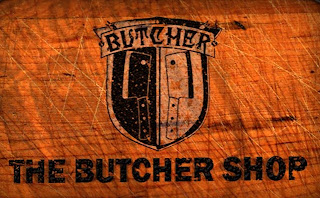 I forgot. I hate editing. Forgot how much I over-write. If I under-write more then wouldn't have to face the dreary editing process. Economy of words. Brevity of wit. Someday I'll figure that out.

Editing has always been an obstacle. The first draft of Lost Vegas was not quite that scene from Wonder Boys, but it wasn't far from it. Original manuscript was massive compared to the lean, mean final draft. I cut almost 300K words down to under 97K. The easy cuts are... easy. Getting it down to 230K was not painful. That's the fluff that you know is there and you must concede. It's those little darlings that are the toughest to kill off. Getting from 175K to under 125K was... painful, and 107K to 97K was torture. For some reason or another, no matter how badly it has to go, I find any excuse possible to keep it in. That bargaining process goes against all logic and reasoning, which is why writers make bad editors and editors have to be merciless. The hardest part of the writing process is flipping the switch from someone who is open to any possibility, to someone who is narrow-minded with one goal... minimalism. I struggle with being cold-blooded and merciless when it comes to editing. Funny... I can act like that in real life no problem.

The key to editing is not to think. Hack away. Nothing personal. It's just excess fluff that doesn't need to be there.

The Human Head helped out with the first round of edits. I nicknamed him the German Butcher because he was not shy about mutilating my script. Entire segments and storylines I worked on and re-worked for years were gone in an instant. It's like seeing a whole chunk of your life get flushed down the toilet. I agonized over certain sections for a year or more. I was haunted for months at a time with chapters. And just when I thought all that agony was over when I finished the script. WHACK! Gone in less than five seconds. Casualty of the editing war. The chapters I crafted and molded and coddled for years were wiped out. DELETE. Gone forever.

It's a mind fuck knowing that something you worked on was considered useless, redundant, sluggish, or out right boring. Why the fuck was I working on something for so long if it was going to get left on the cutting room floor? Such is life. You can't think of that stuff when you're working. You have to put it out of your head otherwise you'll write scared. The way to go about it is... you accept that you have no control over what happens in the future stage of the project, you can only control on your contributions at the moment. But for the moment... for the now... you have to tell the story in the most concise and entertaining manner possible. The better you do that job, the less you'll have to worry about after the fact.

Having your work chopped to bits and flushed down the toilet is tough to stomach. You have to have a thick skin and find confidence at the harshest moments when you haven't seen it in weeks or months. It's terrifying. It's humbling. It's insane.

There was a lesson to be learned during the initial editing process of Lost Vegas with Human Head when he helped me trim it down to one-third its original size. I have to think more like an editor and not waste my time on something that I know is going to get cut later on. And if I want to keep something in a piece, I better have a damn good reason why its there.

How do you slice and dice and three or four page article down to a couple of paragraphs? With a heavy knife blade. I'm currently bogged down in a project condensing articles (anywhere from 2,000 to 3,000 words) down to 10% of its original length (250 words is my target). Sounds easy. Thought it would take a couple of afternoons or one full day of work to complete this two-pronged project. It's been three days so far and I'm still not close to finishing the first part. Holy shit, this might take me a week.

What I have now is a good start. Still need to cut more. Is that even possible? Can I get even more K-Mart Minimalist meets Hemingway? icky thinks I can do a better job. I need to go back in and slash and burn some more.

She's right. It needs to be even shorter. Cut everything down to its bare essentials. Way shorter than what I'm comfortable doing. It took a ton of cajoling and convincing for me to allow 90% to be cut. WHACK! WHACK! WHACK! Baby steps. It took a full day to totally process the fact that I did a crappy editing job the first night of this project and I'm way in over my head and need to be more cold-blooded as an editor, otherwise I'm doomed. Late last night and this morning, I went back in and chopped away. I got everything down to the right percentage, but then I spent most of the afternoon performing delicate surgery. When you hack and dice and slice indiscriminately, it leaves a lot of the story on life support, so I have to go in delicately and tie the rest of the remaining piece altogether otherwise it dies on the table.

Word economy is the key. Less is more. I used to think that a story trumps length. If it's a good story, it doesn't matter how long it takes to tell it or to read it. Then again, did DFW really need 1,000+ pages to tell you about the freaks in Infinite Jest? It's 2013. When dealing with internet-based data transactions, shorter the better because it does not waste your time. Holding someone's attention span is difficult in today's over-saturated entertainment-drenched world. I mean if you didn't have to go to work in the morning, you'd stay up all night looking up stupid shit like videos of kittens falling down stairs. For what? Shits and giggles? A walk down memory lane? Research? Intellectual stimulation? Sometimes, you just want to be mildly entertained with slam dunk contests from the 80s, or old jazz recordings of John Coltrane. But how can I compete with that? I can't.

My break is almost over before I return to the horrors of the butcher shop. It's ugly out there. Slaughtered sentences. Cliches. Dangling dangling modifiers. Everywhere. My own entrails.
by Pauly at 6/07/2013 09:46:00 PM