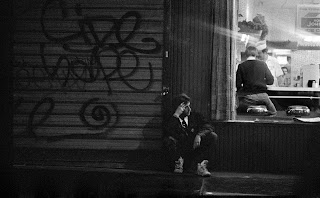 The movie Premium Rush was in heavy rotation all weekend on cable. It reminded me of the summer when I worked for a bicycle messenger company in Midtown. One of my neighbors was the guy who owned it and he offered me a summer job. He was a well-known bike messenger who opened his own messenger service. The guys who worked there were an interesting mix and fell into two groups: professional messengers and part-timers. The non-pros were junkies, criminals, and other miscreants.

The eclectic experiences from that summer would make a great novel some day. Coming of age novel. I was 16 years old that summer too. The summer you're 16 is often one of those make-or-break summers that either defines your youth, or totally ruins it.

Someday I'll write that novel. Not now. I don't have the time. Maybe when I'm 50? Or better yet, when I'm 56 so I have a good 40 years under my belt and I want to re-live the rollercoaster ride of being 16 years old and letting loose in NYC for the first time. By then maybe there'll be a desire for late 80s memoirs in actual physical "book form"?

When I think of the Summer of 16, I think of three albums. Doolittle by The Pixies. New York by Lou Reed. Full Moon Fever by Tom Petty. I listened to all three every day that summer. Wore those cassettes down in my yellow "waterproof" Walkman.

If there was one album that could be the entire soundtrack of the Summer of 16, it would be Tom Petty's Full Moon Fever. I think it was released around Memorial Day. I heard Running Down a Dream on the radio. It had such a sick guitar solo that I couldn't wait to run out an buy a copy. When I got my first paycheck, I stopped by Tower Records in the Village and bought Full Moon Fever.

Simple cover. Reminded me of a Rothko painting. Tri-color. Soothing colors. MTV played a bunch of tracks off that album. Tom Petty was one of the few acts from the 1970s who was still bringing it as the 80s were about to turn into the 90s. Full Moon Fever was Petty's huge pay day. He spent most of the 70s in debt trying to pay off the IRS and his record label. He toured for years trying to raise those funds. With Full Moon Fever's success and MTV launching him into the highest echelons of video stardom, Petty was finally raking in big bucks.


I didn't have cable at home, so I did not have MTV. I got hooked on Petty's music and not the snazzy videos. I listened to Petty's album four or five times a day while working all summer in the city as a messenger and trying not to get run over by taxis or avoid collisions with pedestrians.

I liked the delivery job. It was not my first one. I had a brief stint the previous summer as an "errand boy" at a real estate company in the Flat Iron District. I ran documents back and forth between three different offices. But that was only part-time. The next summer I wanted a full-time job and the prospects were thin. Luckily my neighbor gave me an opportunity to work for him. Plus, my mother and I had gotten into a huge argument and she kicked me out of the house that summer.  Without any hovering supervision, I took the most reckless job possible.

I was the youngest person at the messenger company by a couple of years. I was treated like little brother or mascot. I felt as though someone of the other messengers were super protective of me... almost like William Miller from Almost Famous. They shielded me from some of the hard drugs or the more horrors of the world. Some of them didn't. First time I ever saw heroin was from a messenger snorting it in the bathroom (he threatened to kill me if I told anyone, but later apologized and offered to buy me booze whenever I needed it because I was still underage). I also learned about what happens when junkies nod out or how to identify unmarked police cars.

There was so much craziness going on, but I was also too naive to understand or process what the fuck was happening. Like the drug deliveries. Now, I'm not saying that I delivered drugs. But I honestly don't know. You can never really tell. I'm sure the company did not want to be "drug couriers" which is why they focused on working for ad agencies and PR firms. In 2013, I get tons of PR blasts via email. But back in the late 80s, a PR company had to mail out hundreds of announcements... several times a day. Although the fax machine was around, not everyone had one yet. Bike messengers were still relevant... but their clock was ticking.

At the same time... who knows if I was delivering drugs and had no clue. I grew up in the Bronx and knew all about crackheads and potheads. But I was totally naive. Too young to understand the intricacies of the drug trade. Looking back, I can only recall one particular sketchy "client" I used to pick up near the "flower district." The business was a dingy loft above a flower joint. Usually it was a woman with Cyndi Lauper-like hair and a hundred bracelets on who handed me a padded envelope as soon as I stepped off the freight elevator, but a couple of times some bad ass biker dude (reminded me of Serpico) would answer and insist on coming downstairs to meet me in the vestibule. I guess he was too paranoid and did not want a messenger snooping around his place. That's the type of strange paranoia that a cokehead or cokedealer would have (although his girlfriend had no problems letting me up).

I made all of those deliveries from the West 20s down to the Wall Street area. Almost always it was a return trip. Shit, I'm so fucking clueless... I was probably delivering eight balls and bringing back cash. Lucky if I netted $10 for the roundtrip that took about an hour. Cheapest drug mule in NYC.

Everyone remembers that summer they're 16 years old. Like every teenager, I wasn't getting along with my parents. They had both checked out years earlier and I felt like a pawn caught in the middle of a drunken game of chess. I was scared about starting my senior year in high school because I wanted to get the hell out NYC and go to college somewhere else. Maybe film school in California?

While my mind worried about getting the hell of NYC, I had an entire summer to explore the city and branch out of the few neighborhoods I knew well. I went to school on the Upper East Side and knew the Upper West Side like the back of my hand. Friends lived in Stuy Town and Peter Cooper Village, so I was familiar with a bit of the East Village and as far west as NYU. I was still scared of Alphabet City and even in the late 80s, you had to be truly brave to venture in that neck of the woods in the days when crack was still king.

With my second check I bought Doolittle by the Pixies. If I had to pick an emo soundtrack for that summer, it would be the Pixies. Super short album. Yet it had 14-15 tracks. Which meant each song was super short. Only 3 tracks were longer than 3 minutes and a few were under 2 minutes.


I had my eyes on three different girls that summer. Two had money and were not in the city. Rich Jewish girl. Poor Catholic girl. Rich WASP girl. The bourgeois Jewish girl went to sleepaway camp in the Poconos and I never saw her. The WASP girl's family had a "country house" out in the Hamptons (she used to get pissed when I said, "it's not the country... it's Long Island.") and I never saw her.

The WASP ended up a lesbian (in college). I should have recognized the warning signs. Like field hockey. I was a moron and kept chasing her around when some other girl on her team kept giving me mixtapes or copies of REM albums. I was oblivious that the mixtape girl liked me, yet I was foolishly chasing a girl who didn't want anything to do with me.

The poor Catholic girl went to our sister school (I went to an all-boys Jesuit school and our sister school was 10 block away). She was one of seven kids from a hard-nosed Irish-American family from Hell's Kitchen. She worked at a pizza shop near Lincoln Center and I saw her almost every day, mostly in the mornings. She didn't have to work until lunchtime, but she hated living in a crowded railroad apartment (five kids and two parents squeezed into three tiny bedrooms and a distant cousin from Ireland crashing on the couch) so I usually had a bagel with her and she'd tell me about all the tourists and NYC freaks who came in to order pizza, and I told her about all the weirdos I worked with or saw during my daily deliveries.

Poor Catholic girl adored the Pixies and she told me I'd like them too. I had heard Here Comes Your Man and thought it was catchy so I bought the tape. I listened to it the most on days when I was feeling super emo, which was like every day. But the more I got to know her, the more she reminded me of one of those sad characters Lou Reed sang about.

The third tape I listened to a ton that summer was Lou Reed's New York. I bought the album for Dirty Blvd. I didn't know anything about Velvet Underground... yet. It's funny that if you read reviews about New York today, the critics are either happy/sad that Lou Reed's latest solo album had shades of Velvet Underground. In college, I'd go back in time and discover Velvet Underground and Lou Reed's days as the house band for Andy Warhol's parties at The Factory.


I felt as though Lou Reed was not writing song lyrics, rather, he was telling stories about people I grew up with. Whereas I couldn't exactly identify with the raps and rhymes coming from the other side of the Bronx, I could totally picture the people Lou Reed talked about in his songs. I saw them in my neighbors. I saw them in the people I saw on the subway. I read about them in the crime blotters.

Today, I don't own digital copies of any of those three albums. Maybe it's time to take a walk down memory lane with Lou Reed, the Pixies, and Tom Petty? Or maybe it's just best to leave those memories untouched for a few more years?
by Pauly at 6/10/2013 11:11:00 AM