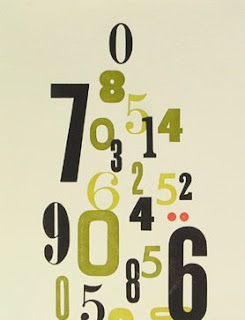 Do numbers chase you around like a ghost that you see everywhere?

When I was a teenager, I kept seeing the same numbers. It would be on a digital clock radio, or on VCRs, or mi my grandma's microwave when I stopped over to visit. Those numbers chased me to college. I'd see those four digits everywhere. I'm sure I saw different specific number combinations more often, but those were not on my radar. I can't recall when I stopped seeing those numbers. But every now and then it pops up and I chuckle.

When I first met the Joker over a decade ago, he told me about his affinity for the number 4. He felt as though whenever he saw a 4, it was a positive message, and any groupings of 4 like 44 or 444 were a symbol of good things to come. We went on a major road trip together in 2004 to see some of the last Phish tour before they broke up. We saw tons of 4s in different states and for some reason, I found that number comforting.

I'm well aware about the sanctity of the number 8, especially in Chinese cultures. I know a fair share of superstitious Asian gamblers Eight is more than great. It's stupendous. In August of 2008, Vegas was overbooked by people trying to get married on 8/8/08, while gamblers (of Asian and non-Asian descent) flooded Vegas hoping that gambling on 8/8/08 would provide them with a little extra good luck.

After a while, you start seeing groupings of numbers differently. Whenever I see five numbers I think of a zip code. When I see a grouping of six different (double digit) numbers, I think of lotto numbers. When I see three numbers behind a decimal point, I think batting average.

When I played a lot of online poker, a specific hand used to chase me around all the time (Queen-8). When I lived in Vegas, I rarely saw clocks but I saw numbers everywhere else. Alas those numbers and symbols were disingenuous. More like marks of the beast. The entire reason Vegas became Vegas is that many self-destructive people are driven by their addictions and they're tantalized by numbers... especially big numbers... which translates into millions of junkies chasing mega-jackpots. It's easy to fleece someone who is blinded by fortune and intoxicated by big numbers, which cloud their judgement. Casinos generate billions in revenue a little at a time. Sheer volume. Amateur gamblers in Vegas are the fools because they're blinded by the bling and susceptible to get rich quick schemes like winning a huge score in Vegas by a slots jackpot, or a heater at the craps table, or by binking a poker tournament. The house always wins because they stack the math on their side and offer up table games with bad odds. But the public isn't aware of those edges and if they are, they don't care because they're "on vacation." Compulsive gamblers tend to donk off their savings in one batch and eventually evolve into degens who run up massive debts and spend every dollar they can get their hands on. Casinos don't need to think big and opt for big score; they'll gladly grind out billions in revenue by one slot pull at a time, one blackjack hand at a time, one Keno game at a time.

Numbers are hidden everywhere. In NYC, you can't ride the subway without seeing numbers of stops, or you can't work in a skyscraper without being guided by numbers in elevators to indicate how high up in the air you really are. In San Francisco, the city went through so many different building and renovation cycles, that you'll see a vast array of fonts depicting numbers. After a while I got good at recognizing when a building was renovated based on narrowing down popular fonts to specific eras. In L.A., they sometimes paint address numbers on the curb, but you always see random numbers whizzing by on billboards and awnings.

Numerologists say there's more to numbers than we think. There's thousands of hours of "conspiracy" type videos about secret societies that hide numerical codes and scared geometry in plain sight. Your name is important to numerologists because it can be broken down into a specific number(s) and those numbers indicate if you will have a good life or a bad life. Numerologists also speak highly about the importance of "life path numbers" which is a combination of hokey mysticism and something that a shady astrologist trying to scam you would say. In case you were wondering, I'm a "3"... which is funny because I wanted #3 on my uniform in high school because Rex Champan wore #3 for Kentucky and he was one of the best three-point shooters in America. According to some rudimentary research (I lazily looked on the first page of Google), I discovered that a life path number of 3 is specifically slotted to "creative types." Truth, or just a coincidence?

A bunch of math wizards and rabbis broke down the Bible using a numerical code. Some of them apply those codes to beating the sock market (e.g. the indie film "Pi") or even betting on sports.

"Mathematics is the science of nature," according to the trailer...


Yet, it's tough to see numbers and letters in your dreams. It's like newspapers are blurry. Next time you're dreaming... try and pay attention and see if you can recognize numbers/letters. That's how I usually can tell if I'm dreaming -- all the numbers get fuzzy -- and that's what I use to try and trigger a lucid dream. Those only happen once in a blue moon and I'm lucky if I get one a year. It's so hard to differentiate reality from dream state when you're dreaming. Time slows down (I think scientists determined dream time is like 1/8th of real time, but it seems much lower because who can have a dream that takes place over several hours, when in fact it transpired in between nine-minute snooze alarms). It's damn near impossible to realize and then convince yourself you're dreaming and then try to control the situations like a scene out of Inception.

Reality is a mind fuck anyway.

Sometimes you see vivid numbers in your dreams, but for me, they are usually on huge banners along side a building, or so obvious that it's hard to miss. Usually numbers are fuzzy in my dreams.  I have a recurring dream about getting lost in a hotel and resort and one of the obstacles is trying to find my way around because all the signs and room numbers are fuzzy. So, any time I have a dream featuring a distinct number, and if I wake up to recall that specific number, then I spend most of that day trying to figure out what the fuck my subconscious is trying to tell me. Those numbers must represent something and my brain is flashing that number(s) for a reason. But what?

Email ThisBlogThis!Share to TwitterShare to FacebookShare to Pinterest
Tags Numerology