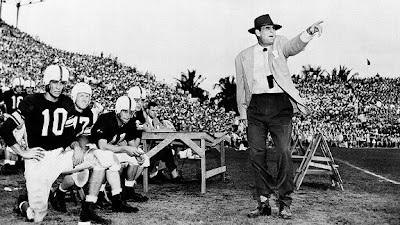 I can name more college football head coaches than politicians and I'm not even a huge college football fan. In some southern states, most kids can tell you the name of every head coach in the SEC, yet they do not know the names of their governor and two senators. Three fucking names. But I betcha they know Saban, Miles, and Spurrier. Heck, they probably know the bottom tier of the SEC too... Stoops, Malzahn, and Mullen. Sounds like the name of a crooked law firm out of a John Grisham novel.

Lesson to new parents out there... don't get fancy with alternative spellings of conventional names, yet embrace a powerful name. Monosyllables are the foundation to success. You want such a powerful name that they must say both first and last names together as a sign of fear and reverence. Hugh Freeze.

Reminds of that scene from A Sure Thing. Daphne Zuniga said she wanted to name her son "Elliot." John Cusak protested with this glorious rant: "Elliot is a fat kid with glasses who eats paste.... You got to give him a real name... Like Nick. Nick is a real name. Nick is your buddy. Nick is the kind of guy you can trust. Kind of guy you can drink beer with. Kind of guy who doesn't mind if you puke in his car."

I will probably stell Hugh Freeze for a character name someday. Sounds totally made up, but not like those cheesy stage name in Hollywood (e.g. Johnny Cougar).

I forgot where I read it... but someone said that in the era of Facebook and Wikipedia, it's difficult to reinvent yourself as an artist. For example, Robert Zimmerman could never become Bob Dylan in today's era of social media and nonstop internet surveillance. You see it happening with Lana Del Rey or even Lady Gaga. They can't outrace the ghosts of their given names. When they were Elizabeth Woolridge Grant and Stefani Germanotta, they were struggling singers flirting the lines of failure. They got a break... sold their souls to the devil... and revamped their images, styles, and adopted stage names. It didn't take long before the masses were alerted to the fact that the alter-egos of Lana Del Rey and GaGa were actually Lizzie Grant and Stef Germanotta.