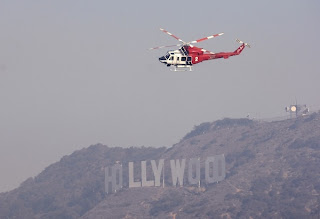 A fucking helicopter woke me up.

What the fuck was a copter doing at 6:30 in the morning? It kept circling my block. For almost a half hour. Over and over and over.

Did I miss a high-speed chase and the suspect ditched his vehicle and tried to hide out in the different alleys in the Slums of Beverly Hills?

I always have a morbid fear that one day I'll see a scene out of Point Break and my alley will be one of the chase routes by an undercover cop chasing after a bankrobber in a Ronald Reagan mask.

It was too early to be a traffic copter, besides we don't exactly live near a freeway. It had to be a newsworthy event or LAPD was chasing someone. Fire? Building collapse? Bieber's monkey?

I never found out what happened. The copter split around 7am. Nicky eventually woke up (with no copters buzzzing, just the echo of dumpster divers looking for empty bottles) and heard me muttering something about copters swirling around our block. I'm sure she thought I was being paranoid. Again.

I did not fall asleep until late. Super late. I tried to crash early, but I was stuck in bed catching up with podcasts and unable to drift off asleep. I was hoping to squeeze an extra hour or so of rest in before Nicky's alarm went off, but the copter woke me up for good.

Doesn't matter how late I crash, I pretty much get up roughly the same time my girlfriend wakes up. Her alarm is a last-case scenario for me. I'm usually awake by the time the first wave of can fairies are done digging through my dumpster and the building next door.

Nicky has the ugly commute. One Los Angeles freeway is a pain in the ass. She has to navigate two of them in order to get to her office on the other side of the Hollywood Hills. Sheesh. I'm lucky that I work at home. My project manager is based in Europe, so by the time I'm waking up, he's done with his work day. By the time I'm crashing or turning in work, he's getting to the office. It could be a lot worse... like a hovering boss... sitting in the same cubicle! Hey, it's only a matter of time before the Big Brother installs cameras in every room in your humble abodes, so get used to the privacy while it lasts.

I rotate my emergency earthquake supplies, particularly food and water. I noticed a few cans of soup, tuna, beans and tea bags had almost expired, so I left them next to the dumpster. Within a few hours, everything was taken except the tea bags. I purposely left them out because I caught one of the dumpster divers literally eating out of the trash. I guess one of my neighbors tossed some edible scraps or leftovers. This one old guy always has a small portable radio with him that plays salsa music. I can tell when he's coming through the alley, because he's tipped off by the static-filled broken sounds of salsa. Anyway, he's the guy I found digging through my neighbor's trash. He takes a sharp stick and breaks open the bottoms of the trash bags. Trash flies out everywhere. He grabs what he can eat. Hey, it's not the worst place in the world to be homeless. The denizens of the Slums of Beverly Hills throw away a lot of random stuff... including food. If you're persistent and adhere to the "early bird gets the worm" mantra, then there might be enough scraps to get by.

Unless the possums get there first.

Yes, there's possums in our neighborhood. Nicky saw a possum the other night lurking around in the alley. I heard a fight between a cat and a non-cat (based on the sounds it was making). It was some other critter that I can only assume is a member of the local neighborhood possum population.

When I was a kid, my neighborhood had a slight raccoon infestation. Yes, raccoons in NYC. Those nocturnal creatures came out during the night and dug through the trash. Those clever creatures knew how to open up trash can handles. Some random late nights, you could hear blood-curdling screams, which were vicious altercations between stray cats and raccoons. Nothing is quite as disturbing as a raccoon clawing apart a cat. You never got to see the dead cat carcass. Raccoons hauled them off and ate them as well. Fresh cat meats trumps human leftovers every day of the week.
by Pauly at 6/12/2013 04:20:00 PM