When the Maids Think We're Crazy 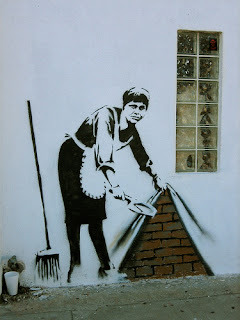 Nicky was still laughing from my previous question ("I don't have to feed them right?"). I have very little experience with domestic maids, yet, I have tons of terrible run-ins with hotel maids, especially the ones who cannot read a DO NOT DISTURB sign and barge right in. I lived in hotels for long period of times during different assignments before I finally figured out renting an apartment for trips lasting longer than 4 or 5 days was the way to go. It turned out to be cheaper in many instances. As a result, Nicky and I were fortunate to stay in cool little apartments in Barcelona and London, not to mention Las Vegas. One of the worst aspects of hotels is dealing with maids early in the morning.

Domestic maids are something completely foreign to me. I grew up in the Bronx. We did not have a maid and my family always did a piss poor job cleaning up, which we usually put off until the night before we had company over for events like Christmas dinner, which my Mom cooked for the extended family. Most of the time, it was messy. I'm not saying she's a hoarder, but she's kind of a hoarder. Not one of those garbage and shit hoarders you see on TV, rather one of those materialistic hoarders that buys a lot of stupid and useless shit and boxes and boxes are piled up everywhere.

When I first started dating Nicky, she and Showcase had a maid that came by their apartment in the Slums of Beverly Hills every two or three months. They were lazy potheads and working a lot so they needed a little help. She was a sweet woman from Ecuador. When Showcase moved out and I officially moved in, we called her to come over and help clean up Showcase's old room which would become my office and guest bedroom. She did an awesome job. We tried to get her to come by at the end of that summer, but her phone was disconnected. We assumed the worst that she got deported.

I did not want to hire a new maid. I don't want anyone inside my home that I do not know or don't trust. For the most part we didn't really have a maid for a couple of years. When we moved to San Francisco, we had to get someone to help clean up for us so Nicky found a reputable agency. They sent two people to do the job, but it was pricey. They were very good, but we never hired them again until this week.

Nicky was at work when they arrived early in the morning, so I had to man the fort while they clean up our disastrous kitchen. I did not realize that I had to give them the tour of the apartment, but in doing so, we had to pass through the foyer which has a gigantic mural of O.J. Simpson's mug shot from after the infamous Bronco chase. One of Nicky and Showcase's friends gave it to them. I totally forget it's there until guests come over. They all say something about it. It's just so massive. I know, it's weird, but in such an out of the way spot that I don't see it too often. Even when I see it, I don't see it, you know? Anyway, we had previous discussions about making O.J. leave or letting him stay. In the end, he always gets to stay.

O.J. sorta freaks the maids out. Every single time. They mutter something in Spanish under their breaths, like a prayer to the Virgin Mary or something deeply religious. I hate to think that they think I'm a crazy lunatic or a potential serial killer for having a five-foot by four-foot mural of O.J.'s mugshot. I can only imagine what kind of stories the maids are telling other maids at their post-job hangout joint (do Beverly Hills maids have a dive bar they hang out at before going home?) about their day. What are they saying about the encounter at our apartment?

I noticed that we were pre-cleaning for the maids on Sunday night. Very strange behavior. I used to make fun of friends who said that they did that, yet that's what we were doing. I kept wondering, why are doing something that we're about to pay someone else to do? It's like going to a restaurant and doing prep work for the sous chef. Or like going to get surgery done, but you apply the anesthesia yourself.

The maids were here for three hours in the morning. I had crushed a Big-Assed Iced Tea. Ninety minutes in, I had to piss. Badly. I felt bad asking them to vacate the bathroom so I could take a leak, so I left them alone and did what any normal person would have done... I relieved myself in the alley.

Yes, I pissed in the alley.

I actually like peeing outdoors. It gets me in touch with nature. It helps me regain contact with my animal spirit, which has to be a dog, because I like peeing outside so damn much. I whizzed all over my neighbor's fence. You know, the hipster with the annoying purse dog? Fuck that bitch.

When the maids were done, the apartment was spotless. It sparkled. It didn't even resemble or smell like our apartment, that's how nice it looked.
by Pauly at 6/25/2013 04:20:00 AM