The Ghosts of Stella D'oro 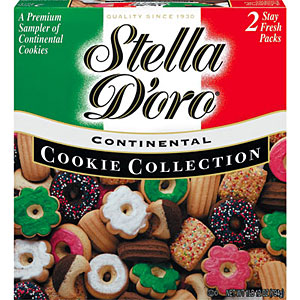 You might have heard about Stella D'oro products like their breadsticks and Swiss Fudge cookies. My brother used to live a few blocks away from their factory-sized bakery before they shut it down. Every morning, the pungent aroma of freshly baked Italian cookies wafted throughout his neighborhood.

Stella D'oro was owned by the same Italian family for over 70 years before they sold it to Nabisco in the early 90s. Stella D'oro got lost in the shuffle when it was acquired by the mega-food conglomerate Kraft.  Kraft later sold the company, and those suits ran the company into the ground. Instead of paying loyal bakers who had been with the company for decades, they slashed wages. They wanted to pay roughly the same wages as McDonalds. The bakers were all union guys and they went on strike. In previous generations, bakers were able to support their families on their salaries. Good luck today trying to do that today with a min-wage slave job.

The suits hired scabs, which drew a ton of bad press. The suits eventually broke the backs of the union and moved the factory to rural Ohio, where they hired non-union bakers for pretty much minimum wage, or half of what the bakers used to make. Sucks for local jobs in the Bronx, but at least they didn't move the bakery overseas to China or Mexico.

When the original family owned the Stella D'oro, they hired from the surrounding neighborhoods that included Kingsbridge and Riverdale. Everyone in the community shared in the success of the company. They made delicious products and the neighborhood was proud to be a part of Stella D'oro. Whenever you saw a TV commercial or spotted the products in supermarkets or saw one of their delivery trucks, you always felt good knowing that your neighbors were a part of that product. It was that part of the Bronx's small contribution to commerce. Nowadays, Stella D'oro products are looked upon with disdain and disappointment. Those jobs vanished in thin air.

The Stella D'oro family also owned an Italian Restaurant across the street from the gigantic bakery. The restaurant, named Stella D'oro, was an affordable family-type restaurant, yet they served fine Italian cuisine. The waiters were dressed up and wore snazzy dinner jackets. They were all old Italian guys with thick accents. We went to Stella D'oro for big celebrations like birthdays and Mother's Day and graduation, but my family ate there on random nights of the week too. We even ordered take out from there once or twice a week. Best meat ravioli I ever had. The desserts were insanely delicious like spumoni and homemade chocolate ice cream. They brought out a plate of free cookies... super fresh and baked earlier in the day. Sometimes the dessert and coffee and after-dinner cocktail portion of the meal ran longer than the actual dinner portion. You could have a lengthy family meal without getting rushed out the door. The restaurant was massive with several different rooms and separate banquet halls. You never had to wait long for a table, but on weekends the joint was always packed.

The restaurant was closed in the early 90s when they sold the bakery to Nabisco, which sucked because it was my favorite Italian joint. All time. By the mid-90s, two of my favorite Italian restaurants in the Bronx closed its doors. That left one decent place for over a decade, but that place eventually shut down a few years ago. The adjacent neighbors had changed over the last few decades and there was not longer a demand for Italian family style cooking. Irish and Italian immigrant families that flocked to that part of the Bronx post WW2 were replaced by Eastern Europeans (Russians and Ukrainians), not to mention an influx of immigrants from the Caribbean -- Dominicans, Haitians, and Puerto Ricans.

In the 1960s and 70s, Stella D'oro was a huge mob hangout. Just picture scenes from Goodfellas. I'm surprised no one ever got whacked in the parking lot. Sometimes my old man had to make suspicious trips to Stella D'oro which lasted a minute and he'd double park the car and run inside. He said he had to take a piss, but I suspected he was either getting paid by his bookie or dropping off a payment to the local shylock.

The old gigantic bakery-factory is getting torn down. A big box chain store is moving in. Sad to see that crap replace all those old memories. I miss those long meals at Stella D'oro. Merriment, fantastic food, and good times. I also miss the smell of fresh-baked cookies that would invade my senses when I walked to my brother's apartment.
by Pauly at 6/20/2013 11:11:00 PM