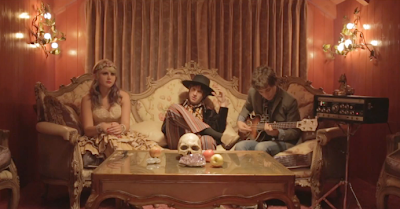 I'm conflicted about Foxygen. They look like they walked right off the screen from a Wes Anderson film. I can't decide if they are subversive anti-hipsters, or the complete opposite which is superficial, full-blown plasticine post-modern trash.

Hipsters are way too coddled and self-involved to actually spend time cultivating anything more than a superficial connection to pop culture fare. This is how diarrhea like like Lana Del Rey gets through the filter because when you're sitting around all day snorting Xanax, anything you play will sound like Aretha Franklin.

Broseph turned me onto Foxygen this past winter. He gave me their new album -- We Are the 21st Century Ambassadors of Peace and Magic. With a lengthy title like that, they have to be mocking everything -- themselves, nostalgia, and the music industry.  But, what if they're not and totally serious?

At the core Foxygen is an LA duo of high school friends who hated "modern music" and adored bands from the 60s and 70s. Lead singer Sam France is also obsessed with San Francisco, which you will learn right away with their lyrics. Foxygen's sound might be retro, but their lyrics are a contemporary indictment of modern society, which is waaaaay too deep for a run-of-the-mill hipster band.

This particular lyric from No Destruction sucked me in:


There’s no need to be an asshole
You’re not in Brooklyn anymore.

Listen to No Destruction here (audio only):


But then again, a song like No Destruction is strewn with goofy images like toking weed on the subway. In one hand, it's subversive genius, yet on the other hand, they are pandering to the kids who ride the L train and waste money (they don't have) on overpriced rent, solely so they can say they live in a hip neighborhood.

Foxygen's sound is a throwback to psychedelic rock (early Rolling Stones) and pre-punk (Velvet Underground). There's been several Mick Jagger comparisons to lead singer Sam France. There's one song in particular -- the title track from We Are the 21st Century Ambassadors of Peace & Magic -- in which Sam France eerily sounds like Jagger, and the arrangement reminds me of the Stones in the early 60s when they were pretty much a R&B cover band.

Here is a video of their song San Francisco, that reminds me of Wes Anderson flicks:


The indie genre is cluttered with bad bands that are only semi-popular because they're caught up in the most recent wave of hipsters' "purchased coolness." When I was a teenager, you bought a record because you liked the music... and if you dug that particular genre, then you did everything possible to dress up like the band members or their fans. In high school, the kids who liked heavy metal music all dressed up like headbangers (e.g. ripped black jeans, Iron Maiden shirt, long scraggly hair, some sort of flannel shirt).

Nowadays, teens steal their music and only accumulating albums to impress their friends. Music, for many of these hipsterfied millennials, has become a conduit of coolness, instead of what it used to be -- a gateway to your soul. Nothing is more powerful that a specific song that can extract raw emotion when you least expect it. When you're bombarded with emotions, music can certainly multiply those feelings. That's why you want to crank up an AC/DC song in a bar when you're riding high after you're seventh tequila shot, or why it's impossible to listen to the radio after you break up with someone because every fucking song sounds so fucking sad and torturous.

The music industry is struggling to stay profitable because no one is buying albums anymore. But the labels trying to evolve are doing everything possible to extract money from the few groups of people who still buy music. One of those groups is hipsters. They purchase music as a shortcut to coolness. Most weekends in the life of a hipster include paying $50 for a vintage t-shirt, chain-smoking clove cigarettes, raiding their grandparents closest for ugly cardigans, and learning how to play Kanye songs on the ukelele. Yeah, sometimes I think that the entire indie music scene is just one big scam to get 20-somethings to buy music they don't actually like, because they're culture-frauds desperately pretending to like obscure bands in order to have something different on their Facebook profile under "favorite" bands. Fabricated coolness.

Back to Foxygen... the studio album is well crafted, which makes them a tough act to see live. The few live shows I heard had sound mixing issues, specifically the vocals. Plus, what makes Foxygen's studio albums unique is the usage of backing vocals and overdubs, but that does not translate well into a live performance.

Foxygen is on the Jagjaguwar label, the same label as supreme hipster indie king Bon Iver. Jagjaguwar pulled some strings and made sure that Foxygen was one of the select bands that was going to get some PR pimping during the SXSW festival. Man, I miss the days when Sundance or SXSW were places in which you could see emerging talent. These days, both festivals have been co-opted by corporations. Park City, Utah becomes a miniature version of Hollywood for a couple of weeks every year. Meanwhile, Austin, TX is invaded by vampires from the recording industry that swoop in from LA and NY. They're not really there to check out new talent as much as they manipulate tech-savvy hipsters and use SXSW to promote their own agenda (i.e. printing money).

Anyway, it's difficult to rise above the static at SXSW, but somehow, Foxygen was one of the few up-and-coming bands that were going to get exposure at this year's festival. All they had to do was play a quick set and then wait for the echo chamber to elevate them and give them an injection of buzz, that would boost in record sales, spark interest by festival promoters, and in the best case scenario... parlay that "buzz" into a slot as a musical guest on Saturday Night Live or Jimmy Fallon's show.

Yet, something happened at SXSW and Foxygen went off the rails. It was a combination of tech issues (not-so-good sound) and a crowd of shitfaced hipsters talking through their set. Heck, one of my biggest pet peeves is people talking during concerts. If you're a musician, nothing is more disrespectful than someone yapping away when you're onstage. But Sam France from Foxygen snapped at the audience and began berating one guy in partiular. It was almost like a scene out of Dig! when Anton from Brian Jonestown Massacre incites numerous brawls with an antagonistic audience. Foxygen struggled through their set and only got through 3 and a half songs before Sam France became unhinged. France said something about how his voice was shot and a drunk troll in the crowd told him to shut the fuck up and stop whining because that was his job. That bit of heckling set France off the deep end.

"Who said that? Come on stage and talk to me about it, you fuckking coward. Come on, get on the fucking stage."

Foxygen performed one more song and then left the stage. A more serene France returned a few minutes later to apologize.

"I'm sorry about what I said earlier to that guy. I wasn't even talking to him; I was talking to myself."

Shortly after that incident, Foxygen cancelled their European shows citing "creative health." Ha, that's a new one. Most of the time when you hear musicians use "exhaustion" it means... 1) exactly what it means and the act is super tired after a whirlwind tour, or 2) strung out on drugs... so exhaustion could be a code word for rehab, or it's a break to detox. In modern times, I'm sure there's a Dr. Feelgood that the tour promoter has on speed dial that will issue the band members a script for Adderall, or they're old school and know a dealer who slings cocaine or speed. Hey, the show must go on... so if it takes a bump or a 15 mg wonder pill... whatever it takes.

Alas, Foxygen (or rather, Sam France) hit the skids with creative health issues. They're supposed to be back on tour when they hit up the festival circuit this summer including a spot at indie heaven -- the Pitchfork Music Festival in Chicago. If they are playing this summer somewhere near you, check out their show because you might catch another meltdown.

In the meantime... Foxygen is a band that I can't stop listening to, especially their album We Are the 21st Century Ambassadors of Peace and Love, and I won't stop until I finally figure it out.
by Pauly at 6/04/2013 04:20:00 PM