Lines on the Mirror, Lines on Her Face

I'm not a fan of the Eagles because I can't fucking stand Glenn Frey. I'm indifferent about Don Henley, but I respect and dig both guitar players -- Don Felder and Joe Walsh -- yet neither were members of the original quartet (Randy Meisner, Bernie Leadon, Frey and Henley) that came together in 1971 as a "super group" of sorts. Henley and Frey were in Linda Ronstadt's touring band, Meisner played bass in Poco, and Leadon probably had the most notable success playing with Graham Parsons and The Flying Burrito Brothers. The four marched into David Geffen's office at newly-formed Asylum Records and demanded a recording contract. Geffen told them to move to Colorado and not to come back until they honed their chops. The original Eagles went off to the Rockies and played dinky bars in ski towns while they developed their sound and jammed out late into the night for acid-drenched hippies. When they returned to L.A., Geffen felt they were ready to make him some moolah. 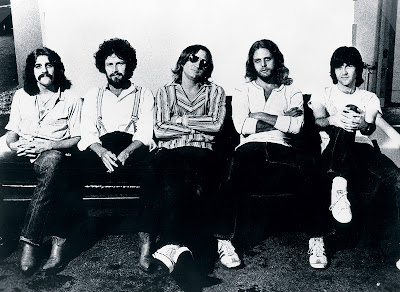 Geffen shipped the Eagles to London to cut their debut album and work with the legendary producer Glyn Johns (The Who, Stones, Zeppelin). If the Eagles fell short of the mark during the recording sessions, Geffen knew Johns would surely get them into the end zone. But the Eagles didn't need Johns' magic. They had a couple of radio-friendly hits that appealed to the masses. Johns just polished it up. The Eagles returned to California with their first record (eponymously titled Eagles) and it was a massive hit. Geffen cleaned up. The Eagles were instantly famous and got cool houses in the Hollywood Hills and got free drinks at the Troubadour and got to snort/smoke as many drugs as they wanted and bang as many groupies they could handle.

The second Eagles record, Desperado, was foolishly a cowboy-themed record. The suits loathed it. The critics panned it. Their fans were disappointed. A couple of songs got airplay, but the Eagles as a country-rock band (or what the hip-cats running labels today would call "alt-country") were not going to succeed if they stayed on that path. Glen Frey wanted the Eagles to be rock-and-roll, but the lead guitarist Bernie Leadon (one of the best banjo players on the West Coast and premier acoustic guitar players) wanted to remain with country roots. Frey won out and the band went on a path to evolving into a traditional rock-and-roll sound.

For their third album, the Eagles added another guitar player -- Don Felder -- who was friends with Leadon in high school. Felder came in to help out in the studio and he impressed everyone with his guitar chops. They loved his sound and made him the fifth Eagle. Felder wrote a great memoir about his time in the Eagles called Heaven and Hell: My Life in the Eagles (1974-2001).

While Felder was getting adjusted to life as the new guy, Leadon became distant and eventually quit the band. That's when they added Joe Walsh, who had a pretty decent solo career with a few bong-rattling hits and along the way garnered a well-deserved reputation of epitomizing the rock in rock-n-roll. Walsh was an insane party animal and a graduate for the Keith Moon University of Room Trashing. All of a sudden, the band had two ripping hard-rocking guitar players and Frey got what he wanted -- a kick-ass, popular rock-and-roll band. They next two records, with Walsh, were popular but it was Hotel California that blew the hinges off the door. The album was a cautionary take about everything that's awesome and hellacious about the pursuit of fame and fortune in the City of Angels. Even Hotel California was a subversive song about the dark side of the recording industry.

Hotel California was a mega-hit, but the difficult and tumultuous recording process nearly destroyed the band, which was on the brink of breaking up. They embarked on a whirlwind world tour to support the album and by the time they got home, they were super burned out. They also had to go back into the studio and start recording the next new album. The show/party continued because they all had lifestyles and drug habits to maintain as the 70s were ending and the 80s were inching closer. They struggled during the recording of The Long Run album, which took forever and ever and ever. Egos got in the way, the creative juices went dry, and whenever you throw cocaine (like a shit-ton of blow) into the mix... the results are disastrous. The Eagles delivered the album under duress and they broke up shortly after.

You know the rest of the story. In the 80s, Classic rock radio stations sprung up all the country and the Eagles greatest hits were played all the fucking time. I must have heard Hotel California a million times by the time I was even 20. The Eagles reunited in the 90s during the "Hell Freezes Over Tour." The reunion was a money grab and everyone involved (e.g. Irving Azoff) raked in more dough than they could ever imagine.

The Eagles cranked out the jams in the 70s. Broke up for the 80s and developed solo careers. Then returned for the 90s... and you know what... the fans were still there.

The Eagles tried to pass off some new songs, but it was derivative shit compared to their classics. The bottom line was that the 90s version of the Eagles did not have to worry about coming up with new material because the fans wanted to sing along to the hits. Since the Hell reunion tour, the Eagles returned to the road and toured every few year on self-indulgent sojourns around the world while Irving Azofff, Glen Frey, and Don Henley printed money. Millions and millions. Adoring Eagles' fans donked off millions, buying overpriced tickets to hear millionaire-musicians in the twilight of their careers performing tepid versions of a pastiche greatest hits, sprinkled with a couple of Henley/Frey self-wanking renditions of the more popular songs from their solo efforts. Millions and millions and millions.


Anyway, I heard an Eagles song this morning -- Life in the Fast Lane -- and there's a line that stood out. It was written almost 40 years ago, but it's still applicable to the vanity and vapidness of L.A...


They knew all the right people, they took all the right pills
They threw outrageous parties, they paid heavenly bills
There were lines on the mirror, lines on her face
She pretended not to notice, she was caught up in the race

I don't like the Eagles, but that was such a stunning assessment of L.A. that I had to sit back and say, "Holy shit. Ain't that fucking right. Some things never change." I could write a book about that someday. Soon, I hope.