I'm leaving for furbelow lights of Las Vegas tomorrow. That's when I'm going to throw myself in the middle of the March Madness insanity for a few days. The sports book at the Mandalay beckons me. I'll be one of the thousands of gamblers throwing down a good chunk of change on the Sweet 16 and Elite 8 games. For the trip, I'm expecting to...
I'm bringing my laptop, so expect live updates... that is if I don't have to pawn off my iBook to cover my sports book loses. I hope to meet up with Grubby and the Poker Prof at some point. I'm sure they have some great stories to tell about the last few months of their lives.

Also on my agenda:
Right now Senor is a "game time decision" whether or not he can make it out of Rhode Island. It's a long story that I'll get into at a later date, but now there's a forecast for 6-12 inches of snow in RI... which complicates things even more so. Suffice to say, whether or not he can make it... I'm still going. I've been in Vegas by myself a few times. I actually enjoy traveling alone sometimes. You never have someone else holding you back. Especially in a town like Vegas, the weirdness always picks up when you least expect it.

I am getting a vision... a hoops vision. Take Kentucky giving 4.5 to Utah and bet the farm on it! Here are the latest lines from my reliable bookie:

There are two bad things about a jaunt to Vegas right now. First, I qualified in a WSOP on Full Tilt on Saturday and will not be able to play. Luckily, Derek will step in. Stop by on Saturday afternoon to root him on (he'll be playing under my screen name). He's a good pick since he's been playing well this month.

Secondly, I'm in the middle of a nice winning streak. In the last two weeks, ever since I abandoned SNGs and NL ring games, I have been padding the bankroll playing $3/6. I'm back on the hit and run wagon, playing sessions for less than an hour and taking quick profits. I'm comfortable. I'm confident. And I feel good about myself despite the many mistakes I'm making, like folding my big pocket pairs, for fuck's sake! All of my previous rushes have been halted by trips. Is my thirst for travel killing my poker game?

June 2004... I found a groove at the NL ring games on Party Poker and after playing online for four months, I finally got a used to internet poker. As soon as I got comfortable, I had to stop to go onto Phish tour and follow the boys from Vermont around the Northeast and Midwest for two weeks hanging out with neo-hippies who think that "selling hemp jewelry" looks groovy on a patchouli scented resume.

Late July to Early Aug 2004... I had been regularly cashing a couple of hundred dollars out of Party Poker every week during a run where I could not lose a $30 SNG. Of course that streak ended when I went back out on the road following Phish (for their last shows ever).

Early December 2004... The week or so after I finished my novel and before I went to Vegas for the WPBT Holiday Classic, I was on fire. When I arrived back in NYC, I was slaughtered at the tables. Briana offered to stake me in my quest to conquer the $50 SNGs. Man, that backfired. I quickly lost my stake and looked like an idiot in the process.

Every time I come back from a trip, it takes me a week or so before I get my mojo back. By then, I'm in the hole and it takes me another week just to make up my losses. It seems that I'm always digging myself out of a hole. Going into March of this year, I was down in 2005 losing about 30% of my bankroll. I miraculously wiped out those loses in the last two weeks. Alas, I hit the road knowing that when I come back, that magic won't be there. I'll have to start from scratch all over again in April.

Anyway, speaking of Las Vegas, it appears that everyone is jumping on The Plaza bandwagon for the June WPBT event. I told AlCantHang a few weeks ago that if we book a suite there, then the rest of the bloggers without rooms would try to stay there, especially since it's so damn inexpensive. Same thing kinda happened with The Excalibur in December. Derek and I always book the Excalibur. I was shocked when I found out that nearly everyone else booked rooms there. I'm looking forward to the same late night hijinks. This time... it'll be at The Plaza. And I cannot conform the rumor that Iggy is going to be crashing in our bathtub. Book your rooms sooner than later.

I know this is random, but thanks to Bob for sending me the remainder of his Full Tilt bankroll... all $8.90 of it! 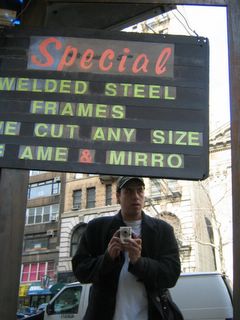 Just in case I'm a little behind in updating my blog over the next few days, I encourage you to read a few short stories that I wrote for Truckin'. Most of you already read one of my favorite stories about Las Vegas called: Vegas, Two Hockey Players, and a Kansas Blonde. But don't miss these stories:

Baby's Steak Knife and Winky's Salad: I consider this the short story the one that started it all. Inspired by the characters in a series of stories I wrote for Truckin', I eventually scripted an entire novel dedicated to Baby & Winky, everyone's favorite dysfunctional couple, called Sweet Nothing. Here's a bit:

There were a couple of seconds after she stabbed me and before the blood started squirting out where Baby and I calmly stared at each other. Our glances lovingly locked onto one another and we had a tranquil moment. Our symbiotic original connection only lasted for a second maybe two, but it was one of those eternal seconds that seem to last forever and you never want to end. It’s those eclectic moments you come across while thinking about life’s odd idiosyncrasies, while stuck in a sullen slouch at the end of a bar, drinking away the roughness of the day’s grind. Or perhaps that treasured moment comes to mind while staring out the window of an airplane, your eyes bouncing back and forth between the clouds and the endless horizon and your shared memories burn a hole in your pants pocket, like a firecracker with a slow fuse that you lit years ago and simply forgot it was there until one day, POP! It goes off... More

Crispy Lineta: This is a weird story because when I wrote it, I never imagined that two years later, I'd be playing a ton of poker, have a popular poker blog, and be actually trying to win a seat at the WSoP. It's inspired by an obscure Rounders reference and the main character is loosely based on a infamous WSoP champion. It's definitely "out there" and I recall that I had a lot of fun writing it. Here's a bit:

While taking a shit, Crispy was shot four times in the head by the voluptuous strawberry blonde, Alberta Desjardins, a jealous ex-girlfriend high on Prozac, Lithium and Pabst Blue Ribbon. The six fingered, former weather girl from Sweetwater, Tennessee was the mother of his myopic twins: Acey and Deucey... More

OK, that's it for now. Next time I update... I'll be in the middle of the desert in Las Vegas pissing away all the money I made writing freelance articles. Will I allow the stygian vibes of losers get to me and pull me down into the depths of depravity? Or will I surf the madness, and ride the wave of good fortune all the way down the Strip?
by Pauly at 3/23/2005 03:03:00 PM