Ante Up at Dear Old Princeton: Online Poker Is a Campus Draw appeared in the Education section of the NY Times. Here's a bit:

Mr. Sandberg, 22, of Alexandria, Va., mostly splits his time between Princeton University, where he is a senior and a politics major, and Atlantic City, where he plays high-stakes poker in his black hooded sweatshirt and dark aviator shades.

Since September, he says, he has won $120,000, including $30,000 in Atlantic City and $90,000 playing at PartyPoker.com, a popular online casino that says it is "licensed and regulated by the government of Gibraltar." Those claims are backed up by his financial records.

Yeah, baby! I remember last year around this time, that my mother would inquire why I kept getting Fed Ex envelopes addressed from Gibraltar. I do most of my banking in Gibraltar!

Well, if the NY Times said it... then it must be true. Party Poker is a fucking gold mine! I dunno why you are not playing on that site. Download the software today and use my bonus code to get extra cash! 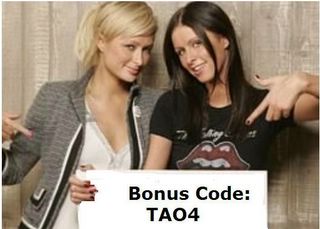 "Gambling is what made this country great, kids!" - Clark W. Griswald, Vegas Vacation

It was another wild Sunday night with bloggers on Full Tilt. I expected 50 players max. for a H.O.R.S.E. tourney with plenty of hijinks. When I saw almost 90, I knew my chances were slim to none that I'd make the money. Oh well, just have fun, right? I spent some time yesterday and today showing Derek how to play Razz and starting hand requirements for Seven-card Stud. I funded his account at the last moment. His laptop was in the shop getting fixed too all week. He just got it back in time to download Full Tilt, get a quick tutorial, and play some H.O.R.S.E..

As expected, I never lasted past Level 9. I busted out on a over-aggressive move in a Seven-card Stud level. At least it was a good run and I outlasted BG, the Bobby Flay of poker bloggers, to win my entry fee back. For our weekly prop bet we threw down $5 on a "last longer" bet. I was victorious and picked up $10 today after The Pope left the hospital in good shape for guy who's been on his deathbed more than Corey Feldman's career. Two weeks ago we gambled on what day the Pope was going to die and BG picked March 10-12. I know, I know... we're batch of bad Catholics. And maybe that's why I failed to make the money in a sanctioned blogger event in like over a year! I bubbled out in Vegas at the Holiday Classic. Maybe I need to improve upon my poker karma and do some more praying to Ganesha to get my poker game and a better balance with nature. Or start praying to St. Patrick for some old fashioned Irish luck to come my way in a few days. 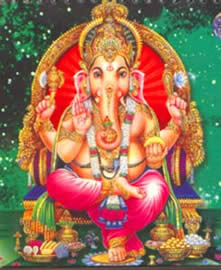 Ganesha
By the way, if I had four arms, I'd be playing with myself all day.

So, I've been playing on Full Tilt for about a week getting accustomed to all the little things about the site that make it cool, different, weird, freaky, sometimes annoying, and overall down right kick ass. I've tripled my buy-in on the passive NL tables after putting a tiny amount of money into my account. I sent Derek a few bucks and blew most of my profits on multi-table tournaments like Razz, Omaha, and NL of course.

I felt confident in my abilities to play every game. My only problem would be patience. The changing format every ten minutes helped keep me in check. I focused better than any other blogger event. Perhaps it was the Grateful Dead bootleg (5.9.77 Buffalo, NY) or the fact I knew I had to concentrate on everyone's cards in Stud, Razz, and Stud 8.

The Cast of Characters

Seat 1: Dr. Pauly... our hero is a mild manner writer from New York City with a penchant for blondes, Northern California Sensimilla, and proposition gambling. He's a Virgo and his favorite Beatle is: Ringo.

Seat 2: The Poker Nerd... from the warm and Sunny state of Florida, our favorite SNGer is looking to make the money in another WPBT event.

Seat 3: ArthurPDent... He is the sworn enemy of G-Rob and resides in G-Vegas, South Carolina.

Seat 4: Jimmy19... He'd go on to make the final table. We cannot confirm nor deny his affiliation with the CIA or any other alphabet government agencies.

Seat 5: Iggy... The two time amateur Whiffle Ball champion from Cincinnati, Ohio was a lock for the 1988 Olympic team if it weren't for that unfortunate accident with the curling iron and vat of vasoline. The scars have since healed and Iggy is looking to prevail in another one of his blogger events.

Seat 6: Matt Stephans... The drunk from Austin, Texas is a man of mystery. He is a loyal blog reader and took third place in the Pauly's Pub Football Pool edging out Haley & Jenna on the last day of the season! 3 is a good number for Matt.

Seat 7: Shill... He's a former Vietnam veteran and a reader/blogger from Michigan/California/Texas who works as a programmer/patent attorney/proctologist by day and plays pot limit Omaha in the backroom of a bowling alley by night. He has one/2.5/three kids and a dog named Fido/Hunter/Blackberry.

Seat 8: Smak... He's a reader/blogger from Arizona/Tennessee/Illinois/Canada who works as a fork lift operator/kindergarten teacher/trout fisherman by day and gambles on the ponies and penny stocks on the Tokyo Stock exchange during the late night hours.