Dunkin' Donuts: A More Perfect Pastry is a good read from Slate. Man, I could eat three or four donuts right now. Here's a bit:

Even as Dunkin' Donuts tinkers with its menu, it still has a nagging problem: atmosphere. Whereas Starbucks channels the ambiance of the European coffee bar and Krispy Kreme the sleekness of the '50s diner, Dunkin' Donuts stores have all the warmth of a sanitarium—and an unsanitary one, at that. The color scheme is often exceedingly magenta. (A grand remodeling plan succeeded only in changing the name of the magenta to "ripe raisin.") Starbucks and Krispy Kreme invite customers to buy something and stay a while; Dunkin' Donuts chases them out the door, as if clinging to the '50s blue-collar ethos of "Back to the plant!" 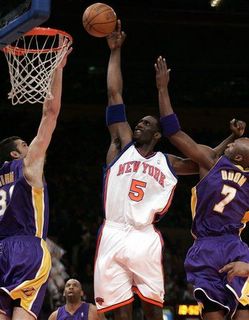 Man I was shocked to see a pro-Knicks article in the NY Times the other day. They are hot and have won three straight. Here's a bit:

They have won three straight games since last Thursday's trades, despite their relatively short roster and a forward-heavy rotation in which the new players duplicate many of the old players' skills.

Rose is a hustling, hard-nosed, undersized power forward, but didn't the Knicks have Jerome Williams playing that role? Taylor is a jump-shooting power forward, and doesn't Kurt Thomas do that effectively?

The Knicks have for months been a team that inspires more questions than answers, and now only more so. They used to talk about finding an identity, but that pursuit now seems pointless, with only 25 games left and only an outside shot at making the playoffs.

But the contradictions are inherent in everything they do, from the front office's puzzling maneuvers to the team's wholly unpredictable performances on the court.

The trades seemed to signal an end to this season, but now they look like a beginning