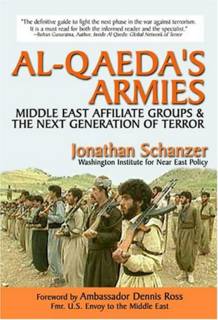 Jon Schanzer, long time friend and suppoter of the Tao of Pauly, was recently interviewed about his book Al-Qaeda's Armies. You can read the full interview here. And this is a huge point that he made:

Fighting al-Qaeda’s affiliates will require a Herculean effort, given the amorphous nature of affiliate groups. The U.S. will have to be flexible because the strategies, tactics, positions, and leaders of affiliate groups change fast and often, requiring real-time intelligence and quick decision making. If employed successfully, such a strategy of aggressively pursuing affiliate groups can yield a series of unequivocal victories in a short amount of time. These victories will be perceived as both military and political. These small operations can also take immense pressure off of an increasingly overburdened American military. Indeed, small victories might invigorate a public that has already grown weary of incessant bad news in Iraq and the war on terror, writ large.

Buy his book today and you can see your favorite blogger's name mentioned in the Acknowledgements section. Yes, Schanzer blew my cover. I'm actually a spy for a secret government agency.
by Pauly at 3/04/2005 09:28:00 AM