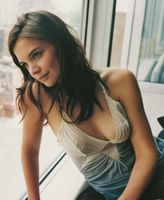 Did you hear that Katie Holmes is dating Tom Cruise? I forget what comes next--do the rivers run with blood or does the sun turn black as sack cloth?

I wouldn't thought Katie had a bit more on the ball than to hook up with a Scientologist. I'm...disappointed. It'd be like hearing that Elvis Costello recorded a cycle of love songs dedicated to Ann Coulter.

My thoughts? I'm a firm believer that TC is a homosexual. Word on the street is that he likes guys. And in Hollyweird usually the rumors you hear are.... somewhat true. I think Katie has a penchant for gay guys. Example: Chris Klein. Besides Natasha "Nasty" Lyonne, he was the worst actor in the American Pie vehicles. He was so bad that he wasn't even asked back for the 3rd sequel. It doesn't matter... because Stiffler is the glue of those films. He was just the pretty boy. Good job to Katie for dumping his ass.

I'm waiting to hear about when Chris Klein starts dating TC. In the end, I still dream about long walks at dusk along Dawson's River with Katie Boobs, as we hold each other's hand and joke about that stupid woman who tried to scam Wendy's with the finger in the chili. By the way, who's fuckin' finger was that anyway?

I know for a fact I scooped Briana on this juicy piece of Hollyweird gossip because our favorite Upper East Side princess is still sleeping! And while I was sacked out... almost 700 people has visited this blog since Midnight.... 600 of which are looking for pictures and information about Katie Holmes and Tom Cruise dating. Oh, sweet Jebus.
by Pauly at 4/28/2005 11:46:00 AM