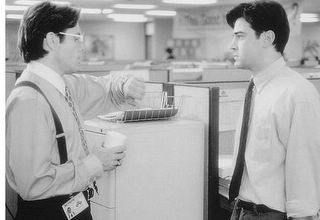 Let's start off with a Thomas Friedman article called Sizzle, Yes, but Beef, Too where he hints that the U.S. Democratic Party could learn a lot from England's Prime Minister Tony Blair.

15% of all cellphone users interrupt sex to take the call. I thought it would have been higher. In my life, only once did I stop intercourse to answer the phone. This was a few years ago when Senor was overseas. I was expecting a big phone call from him and stopped what I was doing to take his call. At that time, getting a call from Senor was rare... it was like getting a call from The Pope. You dropped everything you did and took his call. I won't mention the name of the unlucky gal who had to endure the 15 minute conversation from Senor who was in Bangkok at the time. I think she might still read my blog!

Dead Bassist Recounts the Surreal Musicality of a Long, Strange Trip is a review of Phil Lesh's new book Searching for the Sound and appeared in the Village Voice.

Office Space Reunion is an interesting bit. There's plenty of Q&As with actors from that flick. Here's a bit:

I think it hit the soft underbelly of America. Office Space is set in cubicles, and the American workplace is made up of cubicles. I did temp work when I lived in New York, and it’s soulless...

Man, that's one of my favroite flicks.