Disclaimer: There is not one bad beat story in this post! There is however plenty of crude language, narcotics abuse, sexually explicit behavior, and a discussion of clitoral stimulation. If you are looking for a brief mentioning of Grubby's package being examined by not one, but two of Cheetah's finest dancers.... then you'll have to wait until next week!

Grubby and Senor were getting simultaneous lap dances while I sipped on my tepid Corona and stared at the acrobatic stripper spinning around the pole on the main stage. I have some of the weirdest thoughts when I'm in strip bars and at that time, my mind raced back and forth between different topics. I thought about philosophers like Kierkegaard, Heidegger, and Sarte. I also wondered if any of those gentlemen were to hang out with Senor and myself in Las Vegas... then perhaps the face of 20th Century philosophy might have been changed. How could your existence be that meaningless and bleak when your faced is buried into the chest of a former Miss Teen Louisiana who's using your nose as a punching bag with both her breasts smacking up against you in a one-two combo?

Usually I'll have fleeting moments like "Boy man! Shit God does exist!" when I'm in a strip club. Seriously, the only other place I had a semi-religious experience was at a Grateful Dead concert somewhere in North Carolina when I was 19 years old. But I have a strong suspicion that the three hits of liquid sunshine had a lot to do with my conversation with God that evening. He's a big Deadhead, you know?

Moving on, or shall I say flashing back to... the early 1990s... while exiting the nastiest and raunchiest strip club in Matamoros, Mexico (and I use the word strip club very loosely - it was a brothel with a stage and a stripper's pole in the front), I was once quoted as saying, "Oh my God!" after witnessing an exotic dancer shoot a ping pong ball out of her cookie. I was in awe as the ping pong ball flew over one hundred feet across the dilapidated stage where it landed perfectly in an old rusty coffee can amidst the rowdy applause of the twenty or so drunken frat boys in the joint. Juan Valdez's burro can do plenty of trick's but nothing like that.

I'm used to having religious experiences inside strip clubs. When I made eye contact with Jessinna at Sin in Las Vegas, I was convinced that there was a God because he sculpted the perfect woman for me. Bodies are a dime a dozen, but what made Jessinna perfect was her personality. She was the right combination of cool and aloof, enough so that she didn't know how hot she really was. She lived in the moment and focused all of her attention on me. She bought her own beers and wasn't there to suck every dollar out of my pocket. And lastly, she busted my balls when I tried to slip a Heidegger quote past her and pass it off as my own.

"You didn't just make that up?" she barked over the loud music.

"Huh?" I said, totally shocked that she actually called my bluff.

"You don't think I'm that fuckin' stupid where you can fuckin' pass off a second rate quote from an out dated philosopher like Heidegger?"

There's something very sexy, yet surreal, when a naked woman debates Heidegger with you while you desperately try to drown out a Britney Spears song that's blasting in the background.

Jessinna sat down on my lap and I lost time. She wore a pink Victoria's Secret bathing suit and we discussed the origins of all her tattoos, which took about four songs long for her to explain. I became enamored by her dark complexion and the aroma of her light brown hair (obviously highlighted of course). The natural brunette from El Paso, Texas loved drinking Coronas. She was almost the same age as my friend Molly, who's also an El Paso resident. I knew that the name of her high school was the same as the mountains nearby which seemed to impress her. I wondered if they went to school together. That would have been one weird conversation.

"Hey, Molly. Senor is still alive. I met a vixen named Jessinna in a strip club at 1am. She's one of your old classmates from Franklin High. She has pierced nipples. And damn! That's the best $100 that I spent in Vegas."

I'm confused whether or not that's her real name, even though that's what Jessinna told me. I know... you can't believe anything a stripper tells you. As the story goes, her father picked it off a Mexican soap opera. Now there's a slight grey area. I couldn't tell if her father picked her stripper name or her birth name. I didn't bother to ask for clarification and instead I got another lap dance.

There were two coincidences with her name. First of all, she worked at Sin and there was "sin" in the middle of Jessinna. Secondly, she almost had the same name as the stripper from Iceland that I fellow in love with four years earlier. The Icelandic gal was named Sinna. Add "J-E-S" to the front and you got Jessinna.

Life is funny sometimes. In the middle of the fuckin Nevada dessert, a Jessica Alba look-a-like with Taz tatooed on her ass instantly became hooked up with a stripper in Reykjavik who looked a lot like Gwyneth Paltrow in a bizarre instance of Six Degrees of Pauly.

Jessinna jumped up as the first few notes of Metallica's song Enter Sandman began to play.

"I fuckin' love this song!"

I motioned for her to start another lap dance. Nothing is hotter than a stripper with a song she loves to grind to. Normally, I equate Enter Sandman with the New York Yankees closer, Mariano Rivera. 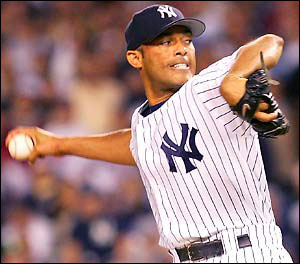 In the late 1990s and early 2000s, there was not a more dominant relief pitcher in all of baseball. As soon as you heard Enter Sandman on Yankee Stadium's PA system, you'd see Mo Rivera sprint out of the bullpen towards the pitcher's mound. As a Yankees fan, you knew that the game would be over in a matter of minutes because he was untouchable. Of course these days, Mo is not as dominant as he once was so it was easy for me to now conjure up images of Jessinna gyrating to her favorite song and I have vivid memories of smelling her hair as she dangled it over me and feeling the warmth of her breath as she blew into my ear and examining the thickness of her nipples everytime I stroked the silky skin on her back and shoulders.

After the dance was over she ordered another round of Coronas. She even bought me a drink. What a girl! That's the first time that's ever happened to me. We sat for an undetermined amout of time before I settled up my tab with her and calmly invited her back to my hotel room for a late night party. She wanted to leave with us, but said she had to work until 6am. I told her, "Too bad. I would have made you famous."

As Jessinna slid off my lap and walked over to a table of L.A. hipsters in the corner, Senor asked, "Dude, what the fuck did you and that stripper talk about for over an hour?"