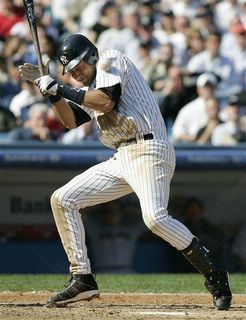 Baseball is back and so is the greatest rivalry in professional sports. Too bad that this heated series was wasted on the first three games of the season.

Some early highlights:
1. Hideki Matsui with 7 hits and 2 HRs in the first two games and bats cleanup in the last two games
2. Derek Jeter's first walk off homerun since Nov. 1, 2001 in the World Series
3. Tino Martinez's first HR of the year
4. ARod became only the second player to hit a HR in the "black seats" as both an opposing player and as a Yankee (Tony Clark is the other)
5. Paul O'Neill was the third man in the booth for all three YES broadcasts
6. Randy Johnson won his first game in pinstripes
7. Joe Girardi is the mew Yankees bench coach

The lowlights:
1. Mo Rivera blew two consecutive saves and cost Carl Pavano and Mike Mussina their first win
2. I have to sit through another season with Michael Kay announcing on YES
3. Mo Rivera cannot pitch against the Red Sox
4. Mussina had great stuff but was squeezed by the home plate umpire
5. ARod's error in the bottom of the ninth cost the Yankees the sweep