I jerked the door open. The exposed roll of fat jiggled underneath an over-sized t-shirt. I giggled for a milli-second before dropping a stone face upon eye contact. The distracted owner screamed a a few f-bombs into her cell phone and grasped a McDonald's cup in the other.

First impressions are important. In my triumphant return to a Las Vegas casino I was not greeted by glamor or opulence. I opened the door and before the first sound of a slot machine got sucked into my ears, I was face-to-face, er... face-to-belly with sweet sweaty roll. Disgusting at the core, yet lathered in cheesy irony. White trash chic is never out of style in Las Vegas.

Welcome back to the land of self-indulgence.

I missed Vegas. Well, I missed a ticket to the circus and bearing witness to the unabashed lengths that some people will go through for gratification. I don't sit on my ass and watch reality shows and to glimpse the absurdity of world in HD. That's what Vegas is for. Like a wildlife safari, but with humans as the exotic, dangerous wild-a-beasts. 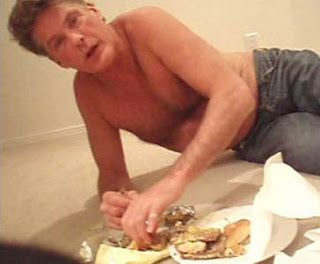 Vegas used to be a classy place, but never more. Gone are the days of people dressing up in their Sunday's best clothes. We're not living in black and white photos anymore. The mob hasn't run Vegas in decades. It's all corporatized and sterlized, and the wiseguys have been marginalized. Sin City is a hackneyed spectacle.... Honey Boo-Boo whiskey tango accompanied by a Lady GaGa soundtrack.

People are herd-like animals by nature, yet often display remarkable chameleon-like skills by adapting to their surroundings just like the catchy P.R. slogan suggested -- what happens in Vegas, stays in Vegas -- or in simple terms, do whatever the fuck you want without worrying about the aftermath on the body, mind, soul, and credit card.

Eventually, it all catches up to you. The hangovers. The headaches. The puke-a-thons. The fractured relationships. The guilty conversations. The embarrassing omissions and crooked half-lies like getting rolled in the back of a VIP room by a stripper with a meth habit three times your mortgage, or shitting yourself in the back of  taxi when you tried to drop a stink bomb, but the fourteenth leg of Alaskan King Crab you gouged on decided to expelled itself through your ass cheeks. If you're lucky you won't get taxed until the afterlife, or maybe you'll fade the gambling gods for a few more decades until one day you're a senior citizen and you leave your house without your pants and you're screaming at a parking meter: "Nice catch donk dick!"

My return to Vegas was marked by a sweaty roll. America the beautiful. Super-sized. Intoxified. And maxed out to the hilt. At least my casino greeter wasn't a former 400-cigarette-a-week smoker with a voice box following me around on a motorized scooter.  I'm not superstitious, except with $50 bills, but sometimes you get a warning shot from the gambling gods with an omen... something like a famished three-legged dog limping over to you and when you bend down to pet the mangy pooch, it pukes up its own feces.
by Pauly at 1/13/2013 04:20:00 PM