Two weeks. I always spend the last two weeks of the calendar year in NYC. Going home for Christmas and New Years is a rough time on the noggin'. Thee end of the year thrusts me into reflection mode and I'm gratefully counting my blessings. Yet, I often take long walks down long blocks like Broadway or Central Park West or Third Avenue and confront myself. It's like a CIA interrogation. I'm waterboarding my own self to get out the truth. 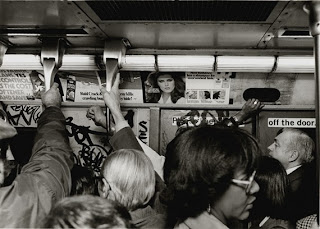 Sometimes I zone out on the subway wondering how badly I fucked stuff up and how many times I fell short of the mark. I look up and down the subway car and wonder how many of them are happy, or sad, or dreading the holidays, or upset that they don't have enough money to buy their child's happiness, or how many of them are bitter that they don't have enough time in the day to do the things that truly make them happy, but instead they revert to a constant holding pattern, awaiting word from the control tower to get clearance for a landing before you finally disembark at your final destination.

I get too many flashbacks in New York that it's overwhelming. Too many ghosts. Too many things, faces, places, buildings, smells, and sounds to trigger flashbacks. Too many memory burns. Good and bad. Mostly good. The happy times playfully bubble up to the surface. The bad ones mostly simmer underneath. The most horrible ones that you never wish existed get buried so deep below  ground (out of self-preservation) that you need powerful digging equipment to re-dig those relics up from the bowels of the Earth.

Walking around the old neighborhood is like getting blindsided with a jolt of energy. Lightning strikes with my brain as the lightning rod. A tsunami of memories with every step. Rewinding at 8x the speed to five years. I had more hair. Rewind. Ten years. I had a lot more hair, but I had a chunk heart tore apart and slings and arrows in my ass. Rewind. Fifteen years. I had zero confidence, not a clue what to do, but a chip on my shoulder and an itch to see anything but the same old streets.

Another jolt. Time warp? Forward or backward? Or sideways? Or upside down? Sucked through the vortex and dropped onto a different street. A different year. I glanced at a reflection in a store window and see myself at 10 years old, wearing a plaid tie and part of my school uniform, trudging through the snow and doing the same walk that I did every day for nine drawn-out years in Catholic school hell.

Another jolt. Leap to an awkward 15 years old and sullen about the troubles at home and struggling in school and fighting the urge to lose myself into punk-wave music or pick-up basketball in the park or crossing over into the numbing video games or hiding in the bathroom while calling up girls from the Catholic high school down the street, but mostly confused about everything and everyone and embarrassed to be wearing the out-of-date and unhip clothes while riding the subways to high school and wondering if I'd get to graduate from and outer borough dreamer to an uptown hip cat raging hard into the night boozing and groping and fondling unattainable women, but somewhat within grasp if I was a prototypical suit working for the Man and someday I can become the guy in a pinstripe blue and musty cologne and shiny shoes, trying to read a folded-up New York Times in one hand and clinging to the strap with the other as a vibrating downtown express train rumbled past Chambers Street vomited everyone out into lower Manhattan to begin another day of financial crimes against humanity.

It all weaves in and out. Memories. Flashes. Some more vivid that others that look like yellowing photographs with curled up edges.

A couple weeks in NYC recharges the memory banks. The California sun bakes me brain so much that it buries those old memories in the bottom of a random desk drawer that you only frantically rush through whenever you're lost or looking for something specific but can recall where it was last... when it happened last... if it happened at all.

The memory is a fickle thing. Your ego is a cutthroat editor that loves revisionist history.

You can never trust yourself.