I worked at the Metropolitan Museum of Art many moons ago. It was my first job out of college, yet it wasn't my first real-world job... that would come almost a year later when I headed down to Wall Street, but for my first dick-around, low-wage job after college happened at the Met. Looking back toward that time in the mid-90s, I realize how important that job was to helping me get on track as a writer. During the last stretch of college, I knew I wanted to be a writer but tried to get into film school because that was the cool thing to do at the time. During my last year in college, I watched epic films like Tarratino's Reservoir Dogs and Linklater's Dazed and Confused and both films inspired me to want to do the same thing, yet I had no idea how to make that happen aside from enrolling in NYU film school. When I got rejected from grad school, I moved back to NYC with a plan to get a shitty job so I can save up enough money to buy a video camera and other equipment. In the meantime, I'd pen my own screenplay and then make my own film. Kevin Smith's Clerks came out right around then, which encouraged me to pursue that dream even more so.

Well, as Lennon said, life is what happens when you're making plans. Along the way at the Met, I met a circle of artists that would become some of my close friends during that precocious time in between college and real life. Almost two decades later, I'm still friends with a few folks from that original circle of friends I made while working at the museum.

I was the only non-artist or non-musician in the group. Everyone had at least one major degree while mostly everyone had a secondary degree like a masters degree in printmaking or a masters in fine painting. I got to witness firsthand the dedication that these young painters and musicians had put forth. I was most attached to the sense of community among everyone. Instead of being vicious adversaries, they had an us vs. them mentality... with "them" being the Establishment, art dealers, critics, and uber-wealthy art buyers who usually had horrendous tastes. It's sad that super rich people are the only ones in America who can afford to blow money on artwork, yet time and time again they go after overrated artists or cliche-ridden trends. Instead of going insane trying to fight the system, the small group of artists/musicians I knew supported each other. If someone had a rare exhibition at a downtown gallery... then everyone showed up in full support. If someone's band had a gig, everyone showed up in the audience. Even the freaks who did performance art... we showed up in droves.

Me? I was the quiet guy who scribbled down a lot of random shit in small notebooks. I read a ton of books, mostly lent to me by my artist friends. I also listened to their heated, yet complex conversations about artists and the direction of art, or the role of the artist in modern society. Most of these conversations went down in the employees cafeteria during lunch, or at a dive bar in the East Village. I rarely participated... but listened attentively.  I wasn't a writer... yet... and often felt weird whenever someone asked me what I did... and when someone in the NY art community asked that question, they didn't want to know what my day job was... rather, they were inquiring about the medium I worked in. I used to say, "My medium? Pen and paper."

I wasn't a writer yet, but I was on a path to one. My friends had already blazed trails and all I had to do was follow. They demonstrated that a day job did not define your existence, rather it's how you spent your downtime that mattered the most. And when they weren't drinking themselves silly or smoking their brains out, they were locked in their studios painting/sculpting away or practice spaces jamming out. Dedication, I quickly learned, was the most important aspect of whatever I wanted to achieve... as a writer or civilian or whatever.

I was only at the Met a brief time, but I learned more about artists, movements, and the current direction of the post-modern art world then I could ever have learned at an art school. I got a first rate education for free because I listened and asked the right questions.

I always try to wander around the Met whenever I'm in New York City. Although some things have changed, many things have remained the same. It's eerie that I can walked into a specific room and expect a certain painting to be on the wall. It's comforting in one way, but it's also extremely sad on the other end because it is a reminder that the museum is preserving an old vision of art, rather than embracing the future, or heck how about the "now". But my art friends remind me the Met was never where you went to see cutting edge art... MoMA and other galleries were the better venues to view modern artists, while the Met is where you took your grandma and her friends to enjoy flowery Monet paintings. Old ladies love that impressionist shit. They get freaked out by menacing black brushstrokes of Motherwell.

I went to the Met on Christmas Eve, except I went as soon as the museum opened and was nice and toasty when I arrived. I was one of the first people inside the doors and I got to view the Matisse and Bellows exhibits before a huge crowd of tourists enveloped the galleries. Matisse was overrated as expected and was more of a "greatest hits" show. The Bellows exhibit blew me away mainly because he died when he was 42 and had so many great years ahead of him as an artists that the world never got to experience.

I spent several more hours in the lesser populated areas of the Met checking out ancient art in Asia, Egypt the Pacific, and Central America seeking out anything that could be included in an episode of Ancient Aliens. I came across a few, like this one from the Egyptian Wing... 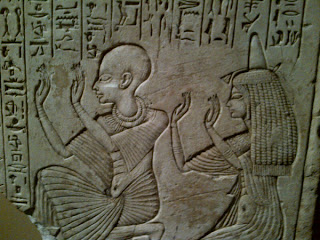 I took Nicky to the Met yesterday on our last day in NYC. It was a quick trip and we had to squeeze in as much as we could in two hours. I showed her Bellows and Matisse and we ran into my old friend, Chuck, who is one of the premier abstract (throw) painters in America you've never heard of (check out his website: CharlesAndresen.com). Chuck was among the group of artists I had befriended almost twenty years earlier when  worked at the Met.