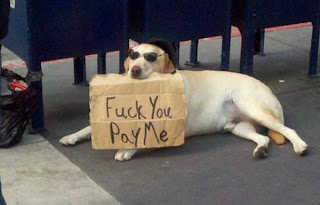 Who said being a writer is fun? They never mentioned "debt collector" as part of the job requirement.

Mama, don't let your babies grow up to be writers. They will be miserable addicts constantly chasing down clients to get paid. Yeah, everyone as lofty aspirations of getting paid to write stuff while sitting in their underwear, and that's a major bonus, but the day-to-day grind of a writer is nothing glorious. It's utterly miserable, especially when you're wondering if you're going to get paid.

Your landlord doesn't give a fuck that your clients haven't paid you. Your bank that issued your credit card doesn't give a fuck that you haven't gotten paid. You have to pay your cellphone bill, or they shut that fucker down. They don't care if you haven't gotten paid. I wonder if those folks whom owe me money actually care about paying me or any of their other freelancers? They sure as hell get on my ass if I fuck something up, or fail to meet a deadline, but when it comes down to holding up their end of the transaction... they are constantly tardy. It's unfair, and yes life is unfair, but it shouldn't be that difficult to cut someone a check or issue a wire transfer in a timely manner.

Most of the time, you are completely stressed out about making a deadline. If you have plenty of time to write, then you're stressing out on whether or not if your words are good enough, or funny enough, or strong enough, or clear enough. Sometimes you channel the word gods and the sentences flow right off your fingertips and you realize that you're just a vessel moving your fingers around because some other powerful force has taken control of your inner dialogue and you frantically try to type as fast as you can while that uplink to the nether world is still alive and viable.

Most of the time, you spend your waking hours wondering why your clients don't like you... because they haven't paid you in a timely manner and you never get a straight answer from your point of contact, or you get stuck in the corporate run around getting bounced back and forth between different departments (that's utter hell when your managing editor tells you to talk to the accounting staff). I have had several good editors that were amazing about reassuring I'd get paid. I had a couple who were brutally honest with the state of financial affairs and I always respected them the most for giving me the straight dope instead of lying to my face.

I never understood the delays in paying writers. There's strict publication deadlines and it goes without saying that the top two taboos for any writer is... 1) plagiarism and 2) blowing a deadline. But on the flip side, when it comes to paying writers, the powers that be do not have to adhere to any timetable other than the one they seem fit. They get their copy on time and in a professional manner. As a freelancer, all I can ask is that they do the same.

Yeah, it's the start of the new year and I'm in chasing down deadbeats mode. Several clients never paid me at the end of 2012... and I let it slide because it's the holidays and I'm a nice guy. But now it's January 2013 and everyone feels like they have to turn over a new leaf and be more honest and communicative with others, so I take advantage of this time of year and re-submit invoices reminding folks they stiffed me at the end of 2012 and they should pay me at the start of 2013, otherwise karma will rear its ugly head and they'll spend the rest of the year wallowing in a stream of shit.

The worst clients are the ones who get pissy at me because I call them out on not getting paid. I feel like that scene in Goodfellas when Henry Hill is explaining how the mob works when dealing with unnecessary excuses from folks whom owe them money...


In the end, that's how I feel whenever clients are 100 days or more late. I'm more than understanding on how the financial cycles work, and I guess that's to my detriment because I'm too patient sometimes and that's how I get taken advantage of. I'm too nice of a guy. But don't get me angry. No one likes it when I'm angry. I go all kinds of Hulk-crazy and smash things. You don't want me to show up at your place and throw chairs around your living room. I've only done that once... and it actually felt good. Too good. Which was scary. I like throwing things in anger. So don't piss me off, because I actually get all warm and fuzzy inside the moment I pick up a chair and decide to hurl it as hard as I can across your living room.