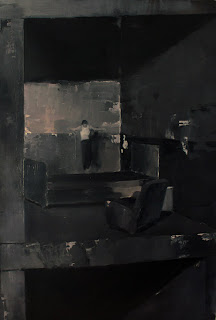 Happy Monday morning, Los Angeles. The time is 9:17am. The temperature is 68 degrees.

We have a set of neighbors who argue all the time. A young actress and her boyfriend live across the alley. Both are highly entertaining because you never know when they are going to go off on each other and start hurling drunken insults at each other like a scene from a Tennessee Williams play.

The young actress across the alley has had a really bad string of boyfriends. She can't pick the right one and they end up in shouting matches at odd times. We met the first boyfriend when she first moved in. They relocated to sunny L.A. from whatever Midwestern hamlet they originated from. He was your typical high school jock that barely kept his head above water at a local community college, and she was a budding actress who starred in a couple of Oxygen/Lifetime movies. Nothing to sneeze out in Hollywood terms, but for a small town girl it was pretty huge. She was going places. She had star-like potential with girl-next-door looks. Her boyfriend dropped out of college and they made the trek to L.A. together. Somehow they found an apartment next to ours in the Slums of Beverly Hills.

She had lofty aspirations. Perhaps a sitcom, or national commercial, or maybe even a role in a major feature. She wanted to build upon her not-so-impressive imdb profile. The boyfriend was much less ambitious. He once told us that his main goal was to work in a marijuana dispensary. At the time, weed shops were exploding in the greater Los Angeles area. He was a total stoner "bro" but at least he was in a good market to find work. Except reality sunk in; he couldn't find anything and he ended up humping a min-wage job in a smoke shop that sold rolling papers, blunts, bongs, and pipes. I think the smoke shop sold cigarettes and porn mags, but it mostly looked like a front for some sort of criminal enterprise. There's two smoke shops within walking distance of my apartment but he worked at one somewhere up in West Hollywood.

The young actress and the stoner bro didn't last very long. Too bad. He was kinda cool to hang out with. Very chill. Laid back. He liked some of the same bands and had a STS9 sticker on his car. I could tell it wasn't going to last very long. They didn't really mix. He was a fish-out-of-water and she had her eyes elsewhere. Nicky and I both knew that as soon as some hot hunky guy from her acting class, or sleazy studio exec put the moves on the young actress, she'd ditch her pothead boyfriend and embrace the local pool of potential mates, while casting her high school sweetheart aside.

I wasn't around when they broke up. I was in Vegas for a work assignment (the World Series of Poker). I left at Memorial Day and by the time I returned to L.A. at the beginning of August, stoner kid was long gone. His car and his STS9 sticker were nowhere to be found. The young actress replaced her boyfriend with a roommate... an aspiring singer. Less than 24 months after moving in, the new roommate made a deep run on American Idol. True story.

But the aspiring actress? She's still aspiring. She was humping a series of shitty jobs while she auditioned and faced rejection after rejection. I think she was a waitress for a while, then a massage therapist, then a yoga instructor. It was never something concrete, but with enough flexibility that she could take off a few hours and fight traffic for an audition. Then rejection. Then more auditions. Then more rejections. She never gave up, though.

Her latest boyfriend is an alcoholic, out-of-work actor. She opted for a pretty boy but with a serious edge. His drinking escalated over the last year or so. His career never took off and he struggled immensely. He dulled the pain with the bottle. She was working a day job more than she had hoped and was supporting him most of the time. She taught yoga more often than she was auditioning. She'd come home from class only to find her boyfriend slumped in front of the TV completely bombed out while watching really bad reality TV. Or worse, she came home and he wasn't there... instead out at some hipster bar getting bombed with other out-of-work actors. She'd call and text and worry, but he'd ignore her all night before coming home in the wee hours. That's when the most vicious fights happened. She'd ambush him at the door and they'd rumble with their voices booming across the alley.

One evening around 4am, I heard her hitting him. Hard. To his credit, he didn't fight back. Maybe he was passed out cold and she was just screaming at him just to scream at him. I thought she might stab him or something. That was the closest I came to interfering and calling the cops. But I also knew better... it's none of my business.

Things were hot and cold the last few months. It sounded like she was auditioning more and more. She was practicing vocals... a lot. The other day she was singing loudly. Nicky recognized the lyrics. It was the Rizzo songs from Grease. Sounded like she was gearing up for a musical.

They screamed back and forth this weekend, but nothing out of the ordinary. Then things got ugly fast this morning. I sat down at my desk to cover an online poker tournament, but I was distracted by the cacophony of screaming. My office is adjacent to their bedroom. Her screams were flooding my office. It all started when she got up to go to work and he was hungover to all hell and presumably puking in the bathroom. She lost her shit. It was only 9am.

"Shut the fuck up! Don't speak. Ever!" she screamed as it echoed through my walls. "You're crazy! You need help. You need therapy. I'm not going to date you anymore unless you get help!"

"Stop being disgusting and dramatic," he howled.

"You have the time and energy to get trashed, but you never have time for me."

"Maybe if you weren't such a selfish bitch!"

"Shut up. Shut the fuck up. You're not a man! NOT! A! MAN! All you've ever done is promise me the world and all you've done is fuck me in the ass."

Ouch. At that point everything dulled down. A few minutes later you heard her in the bathroom. Sobbing. Uncontrollably. Guttural sounds. Like she was choking on her own tears.