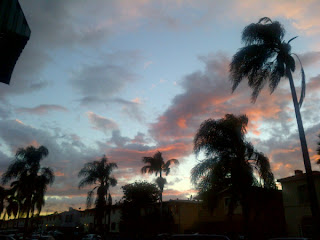 "Check out the spooky moon!"

Nicky rushed into my office and gleefully announced the arrival of the looming evening moon, just only one day after the ominous full moon came and went. The spooky moon glowed like a big-ass off-white dot in the dark grey sky. You could only see the spooky moon if you looked out our kitchen and dining room window. It was not visible from my office.

On Sunday I took the picture above. Nicky was working (from home) and I insisted she take a step outside to look up at the sky. It was one of those typical late winter sunsets in Southern California. Pink. Orange. Purple. Pink-Orange. Purple-Pink. Sherbert Orange and Orange Orange. Bright Orange hues reflecting off the bottoms of the clouds hovering above the palm trees gyrating to their own diverse rhythms. You can't blink otherwise you miss the skies soak up one last breath of light before it fades away and becomes ravished by the aggressive darkness. For the few minutes... I stood in the street and looked and gazed and gawked at the smog mixed with chemtrail soup which make a hearty gumbo of think man-made gooey clouds.

The soothing sunsets are what make the city palatable for a few moments before aggro-darkness falls prey upon the city. Millions of dreams are assaulted by the troll-like cannibals that steal sugar-plums from your refrigerator while you float in the nether world between your waking life and dreaming life, which you experiencing a teleportation cycle back and forth between dimensions while the whole time your brain interprets the experiences of popping up in random places as a mere series of dreams, but in reality you're zipping across the cosmos and visiting other planes of consciousness, or physical planets, or wandering through colonies on the moons of Jupiter, yet you think you're sitting in a classroom in the Cleveland suburbs reliving the time you were in fourth grade and you stole Missy Murphy's Capri Sun and drank it during recess when no one was looking, but it's not Cleveland but somewhere in a different solar system.

If you're like me who spent a significant time traveling a lot for business and living in hotels for long stretches at a time, then you must have similar recurring dreams of getting lost in large, sterile hotels or wander around the lobby looking for someone to help you, or you're riding elevators with strange travelers with lots of luggage, but keep getting off on the wrong floor, or you're riding elevators on that are broken, or won't stop at the right floors. I won't waste your time delving into the (obvious) symbolism behind the elevators, but I have too many elevator dreams than the average person should have. Anyway, I also have random recurring dreams about waking up late in a hotel and having less than ten minutes to check out and catch a taxi, or train, or flight somewhere else, but I can't find all my stuff that's scattered throughout the room and I can never find that one thing that is missing which is the source of plenty of drama and anxiety, but then other times I get lost walking around the hallways in a Ramada-hell-like maze with ugly red-maroon-shiraz color and the rugs have that new smell, but it's super soft to walk on, but there's maid cart obstacles blocking hallways or wet paint signs on doors, or broken elevators or you get the wrong directions from another suit with a carry-on on bag and take the turn at the wrong corner and wander down a creepy hallway like something out of The Shining, and you hope you don't run into the kid on the big wheel.

Yeah, those dream-like moments are so vivid when it's happening that you cannot distinguish a dream state from a waking state, but you forget 99.9% of the dreamy details moments upon waking until make that 0.1% flashes back to you while you're in the shower grabbing a bar of soap, or on your way to work while sitting on the subway and you see an old man with a newspaper and you recall the same fucking old man was reading the same fucking newspaper but he was sitting in the lobby during your previous night's dream when you were waiting to check out of the Ramada in Berkeley, CA. Sometimes I wonder that you forget almost 99.9% of your dreams instantly upon awaking in order to protect your uber-sensitive waking life from getting jealous of all the endless possibilities for anything in the netherlands of your in dream-world compared to the banality of the real world.

Before I fell asleep, I was lulled into an almost trance-like state by listening to the sounds of palm trees echoing through the alley. The wind began to pick up over the afternoon and intensified over the evening. The way the wind sounded in the alleys was a little troubling. Howling wind tunnel. The swaying palm tree leaves whipped back and forth and sounded like waves crashing on the beach on the cusp of high tide. Crashing swaying. Swirling. Howling winds. A couple of loose boards on the alley fence smacked and slapped up against each other. If the winds picked up another 5-10mph, the whole fence might had blown over. This is not what you call wind country, and we're on the Eastern side of Century City so we never catch anything blowing in from the ocean.

It's mostly tranquil in this nook (a.k.a. the Slums of Beverly Hills, or what the hipsters would call "The Adjacent") nestled in between Cheviot Hills and the outskirts of Beverly Hills. We're prone to the occasional light breeze, but nothing that would huff and puff and blow down my fence. Then again, the slumlord is a little cheap and the makeshift fence is probably as old as the apartment complex, but with lots of holes decades-old patched up with recycled pieces of wood.

I considered asking for his permission to paint the fence, but it wouldn't be a Tom Sawyer/Huck Finn whitewash. Rather, I'd like to tackle a more ambitious abstract paintings similar to Gerhard Richter's squeegee pictures. 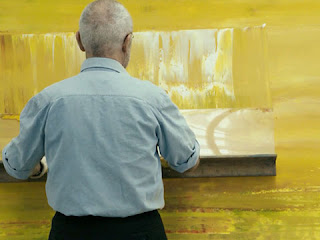 Or maybe that was all just a dream. The spooky moon. Or the orange-creamsicle clouds. Or the swirling, howling winds. Or painting the fence with smudge-like patterns.
by Pauly at 1/29/2013 04:20:00 AM