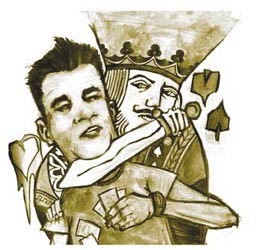 Did the magnetic poles shift over the last week? New York City is getting near-Spring-like temperatures while Southern California and Nevada sunk into a deep freeze.

Step into the freezer?

I don't mind nature's curveball... so long as it passes quickly. The entire point of living where I live is to take advantage of the balmy weather in January, ubiquitous sunshine, and be in a city that is sympathetic to writers. Walk into any Starbucks in the greater Los Angeles area and wave a bunch of pages around and utter "Did someone drop their screenplay?"... then watch a dozen disheveled, half-baked writers bum rush you like you're helicopter pilot on top of the U.S. embassy and manning the last chopper out of Saigon.

NYC is a tough town for writers because there's way too many A-type personalities running rampant. Cocktail parties with pretentious drunkards on a wine-buzz are equally painful on both coasts, but the Upper East Side events are cliche-ridden conversations that sound more like Linked In quips while trying to compare cock sizes to bank accounts and where in the Hamtpons you summer. Sure, in the end everyone wants to talk about themselves (or talk shit about other people), but very rarely did the NYC hoi polloi inquire "What are you writing?" They're more interested in how much you pay for rent or how much Len Dunham's mother's TriBeCa loft is worth than wondering what kind of script you're working on or nor do they care if you're struggling to to hide your obvious literary influences and worried that none of your secondary characters complete an arc by the end of the third act.

Things are weird on the Left Coast, and as much as a loathe the plasticity and shallowness of Los Angeles, it is afterall, a show biz town which attracted insanely talented people for all over the world. Every other person is working on a script, or shopping one, or struggling to come up with an idea that will be a million to one shot to actually get made. Your valet driver. Bartender. The neighborhood dog walker. The guy working at the marijuana dispensary. The UPS driver. The girl working the front desk at the Namaste Yoga studio. The working class in Los Angeles is made up of aspiring artisans... writers, musicians, actors... all creative-types at heart, but slighted by society because they have to wear a name tag during business hours.

Anyone can write a bad screenplay. I've written dozens and have three or four rattling around my loins ready to be shat out in Final Draft or some other hacked version of screenwriting software. But there's so much more to a successful screenplay than snazzy dialogue and likable characters on paper. After the studio get done chopping up your bloodwork and it gets hijacked by a suit who really wants to bang Megan Fox, so he insists on casting her as the next door neighbor (even though you wrote the role as a 84 year old Cuban man). Selling a script in Hollywood is worst odds than trying to donk-win Lotto. There's an underlying deviant dark side of the business where pimps and agents blur the lines between exploration and art. Media manipulation and occult worship combined with overwhelming influence of the power brokers makes it almost impossible to get anything done without getting your best ideas stolen and cloned, with your originality deleted and liquidated. And then  there's an added element that I can only categorize as spooky paranormal shit that happens in the hills of Hollywood.

When I discovered about five or six years ago I did not have to live in Las Vegas to do what I do... I jumped at the chance to leave. There's plenty of good and quirky things about Las Vegas that caters my personality, especially the insomniac side and people watching. But problems arise when I'm confronted with the other demons like degenerate gambling, and the urge to say, "What the fuck?"

For any of my readers who was born before Reagan took the White House, YOLO means You Only Live Once. My generations of Gen X snarked-out malcontents refer to the line from Tom Cruise's breakout role in Risky Business... "Sometimes you have to say, "What the fuck?'"

Those three words... what the fuck... steered me into many misadventures, both good and bad, yet mostly bad but in a good way because it gave me material to write about and life experiences for me to draw upon when trying to figure stuff out at a later date. Then again, most of the stuff that happened in Lost Vegas required me to just stand still and observe. Most of the time, that's what I enjoy doing the most. I like to watch life race by. But eventually the voyeurism in Vegas gets too perverse even for my tastes.

Vegas is a perfect city for people without vices. If you have your shit together, then you have the mental toughness to live in a town that profits off your every weakness. Sex. Drugs. Rock and roll. Gambling. Rehabilitation.

You'd be surprised at the ever-growing Mormon population in Vegas. I didn't realize the sheer numbers of the Mormon Army until I moved to the Vegas burbs in Henderson and became Grubby's roommate in 2005. He rented modest two bedroom condo in the foothills of Anthem. Most of the time, the front gate was wide open and young Mormons pedaled through the complex on bicycles. I never noticed how many guys in white shirts, ties, and bicycle helmets strapped to their heads knocked on my door at odd hours (and odd hours meaning during the days when I tried to sleep). The missionaries were trying to convert heathens... and I was in their wheelhouse as a fallen member of the Catholic church. Sometimes I wondered if they were trying to get me to read the Mormon Bible, or if they were hustlers try to scrounge up a few bucks by posing as Mormon missionaries?

One of the most successful poker players I know used to be a bible salesman before he took a shot at the big time. Seriously. Door-to-door salesmen are patient and hardworking folks because they have to pound the pavement instead of sitting in a boiler room and cold calling four thousand numbers a day. Some of my friends in college tried to get me to join them as door-to-door salesmen... one kid sold knives and another sold encyclopedias (this was the early 90s in an era before Google when people had to actually consult reference books to figure out shit). I was thisclose to becoming an encyclopedia salesman before I realized it's hot as fuck in Atlanta during the summers and I was better suited doing something else that did not require me to be lugging seventy pounds of books around.

Maybe I should start my own religion and peddle religious books so I can get tax exempt status? Then again, if I keep on this horrid losing streak in the NBA (1-7 in the last few days), I might be forced to dress like a Mormon and set up a stand in the hallway at the World Series of Poker and sell crucifix card cappers to broke-dick poker players desperate enough to try anything to jump-start their game. If things really get bad, then I'll be forced to hawk bibles door-to-door in Summerline specifically preying on their gambling superstitions and sound like a crooked preacher, "Repent now and read scripture from the St. James Gambler's Bible before you go to Bingo and the gambling Lord will shine his grace upon thee."