A Tale of Two Elvis 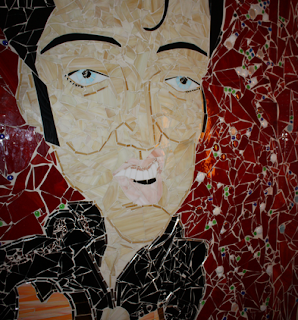 Today would have been Elvis' 78th birthday. He died face down, ass up in his bathroom crocked on a cocktail of pain pills and other heavy medication. Despite the rumors that he was a truck driver in Montana or had fled to Argentina, Elvis passed away in 1977.

The first incarnation of Skinny Elvis was deep-rooted in the South where an ambitious young and debonair musician had blended all the genres of music he loved the most from Mississippi blues to hillbilly music. Elvis was part of the first wave of rock-a-billy that eventually bled into rock and roll. Along the way, Elvis cranked out gold record after gold record, but got hooked on trucker's speed while playing and gyrating at endless gigs in venues (big and small) crisscrossing the country. Elvis got hustled by pimps in the record industry who pillaged the allowances of teen girls from coast to coast, and by the time he reached the hills of Hollywood, "Elvis" was a brand name. Putting him in "the pictures" was the equivalent of printing money for the fat cats running the studios in Tinsel Town. Skinny Elvis was a pretty boy and bankable as a magnet for swooning women. To quote Clarence Worley from the epic early 90s film True Romance... "If I had to fuck a guy, I'd fuck Elvis.... but not fat Elvis."

The second incarnation of Elvis... Fat Elvis... was bloated, drug-addled, stricken with over-consumption, and performing half-assed gigs by phoning in his greatest hits to shitfaced tourists in Vegas. I know a bunch of musicians whom aspire to reach that upper echelon of success (and excess). However, the second part of Elvis' career was the epitome of cheesy. Those words best describe America's decline in the second half of the 20th century... amidst the glitz and flickering bright lights of Sin City, a engorged and tired wastrel was paid off by a ruthless cartel (fusion of mobsters and bankers... alas, the origins of Banksters) to crank out watered-down entertainment in attempts to lure well-to-do people into casinos, so they could donk off a few hundred bucks while waiting for sweaty Elvis, clad in a one-piece jump suit, to waddle on stage to a pompous introduction of Also Sprach Zarathustra...


But shit... even during his worst days and cooking on a handful of Quaaludes, Elvis still had more gravitas in his little toe than the majority of modern day "pop" sensations combined. Elvis was the King because he made more women moist with one song that Beiber will do in forty lifetimes.

Happy birthday, Elvis. I hope they serve peanut butter and bacon sandwiches wherever you ended up in the afterlife.
by Pauly at 1/08/2013 10:10:00 AM