The first leaf blowers rev up around 8am, somethings cheating five or ten minutes earlier that the law allows, and they won't stop until noon or so. Some of the blowers try to go even earlier. Different neighbors have different landscaping crews and they show up at different times. So there's never a specific hour of the day, or day of the week when the guys with the leafblowers arrive. Most of the time, they're the loudest whenever I crash at 6am, or in my office bright and early and writing something for work.

Appearance is everything. Especially on the streets adjacent to Beverly Hills. Pristine lawns. Lush gardens. Trimmed hedges. Any scraps of dead palm leaves whisked away by the landscaping crews, among the thousands of invisible illegals that are around every morning, yet they're somehow off the grid.

Timing. It's all about timing. In San Francisco, I had to wake up at a certain time before rush hour began and the Muni rumbled down the street and shook the house somewhat violently that you could easily mistake it as a minor earthquake. Nicky and I had our bedroom facing the street, so we could hear the cars and buses and mopeds, but if you could knock yourself out and sleep thru the boisterously loud rumblings and shaking during morning rush hour, then you were golden until 2 or 3 in the afternoon. Late nights, the traffic would die down except the stray taxi or two. You could hear the faint fog horn from the Golden Gate Bridge go off at intervals, but the loudest sounds were echos of laughing drunk hipsters smoking cigarettes in front of the bar from around the corner. Sometimes late late nights when the bars closed, we'd watch shitfaced folks meander home and stumbling and bumbling and losing the battle against the steep hills they had to climb to reach their palatial homes in Pacific Heights. My all-time favorite drunk hipster? The one with an internal steering system so skewed that he kept walking off to the left at 45% angles and constantly walked into parked cars. I lost my shit when he smacked into a telephone poll and fell backwards. The funny thing was he did it twice. It was like a really bad Tom & Jerry cartoon or something. I couldn't believe what I saw. I wish I had something to record the drunkard. That double-tap into the pole woulda been the perfect gif to play on an endless loop for eternity.

Timing. It's all about timing. If I don't crash at a certain time in L.A., then I'll get awaken by the can fairies and the dumpster divers and the landscappers with their machines and the neighbors (married couple upstairs feuding before work and the volatile couple across the alley at each others' throats). If I awake from any sort of slumber... then I cannot fall back asleep.

I tried keeping a dream journal (which entails me picking up my CrackBerry seconds after waking to email myself keywords and phrases and as many details as possible from a dream). Almost 30 nights into 2013 and I only have two dreams that I can recall (recurring wandering around hallways of a hotel dream). I didn't write down either and I already forgot the other one. This project is going nowhere, but I'm hoping to get more information over the next few months... provided I get dee enough sleep to produce dreams.

Time. That time thing is messing with my head again. Never have enough time to get stuff done... get everyone done. In the 90s when the average person did not have email but had an answering machine, I had a friend at work who had sunk into a deep depression over the simple fact she would not be enough time in the world to read every book on her reading list, not to mention new releases. I thought that was total horseshit at the time. I'm one of those people with the lemons/lemonade philosophy and make the best of what you got, so that felt absurd that someone who be crippled by sadness over lack of time.

Seize the moment. Don't bitch about it. Live now.

Instead of being frozen in a state of melancholy, the sad woman should have spent the time reading as many books as possible instead of worrying about not having enough time to do the things you enjoy, or fretting over a Sophie's Choice about what book gets your attention at that particular time. That's why I was dubious of the assertion about being depressed over not having enough time to read books. That was a cover story. Like a bogus "weather balloon" story at a UFO crash site concocted by a high-ranking Air Force media liaison. The real root of the depression was laziness caused by fear of dying. My friend never read books because in the end, the concept of death was so terrifying to the point that it seriously rendered her incapable of enjoying idle time with a book on a park bench, or on the subway, or sitting on the shitter, or thumbing through a few pages while stuck at the post office.

Death, dying, mortality... or I should say, fear of all of those (or on the flip side, incorrigible and huge recklessness flirting with edge) is valid enough of a reason to sink into a phase of melancholia or paralyze serious life decisions. But to drag books into it... or some claim sort of lack of ambition is horseshit and a bad excuse.

My advice didn't sit well. I come off too honest sometimes. "Just read the fucking book. Seriously, open it up and read."

She didn't talk to me too much after that. I guess I wasn't being sensitive enough, or she knew that she couldn't illicit sympathy from me. I mean, if your cat died and your sad... well, that's really sad. But if you're sad because you don't have the time it takes to do everything you want to do, then that's tough shit. Such is life. That's why you have to wake up, drag your ass out of bed and start living life instead of sitting on the sidelines worrying about not having enough time to live. 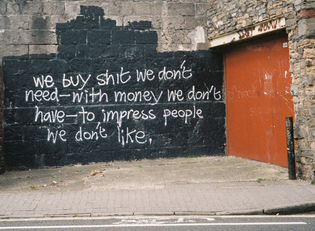 It's challenging to choose to be an active participant in life by creating things instead of buying things and opting out to become a glazed-over sleepwalker overlooking planned obsolescence because it's much easier to accept the ill effects of consumer shell-shock and PTSD that lingers after a blitzkrieg of Christmas' driven hyper-consumerism for two months at the end of every year, before the mass consumption machine ramps back up again in January with a well-coordinated bombardment of Valentine's Day propaganda that even the joint efforts of Goebbels and Draper could never pull off an multi-industry-wide holiday coup by forcing the public to lay siege once again during a month-long carpet bombing of the dreaded, hackneyed "red heart symbolism" followed by an invasion of pink.

Any combination of pink and red and pink pink pink to remind you about Valentine's Day. Yes, a friendly reminder that you don't quite fit in unless you buy more shit you don't need.

Modern consumers (anyone born after 1970) were conditioned by the television from the earliest age not to desire mental challenges, rather under the guise of a brief commercial break in between their favorite programs, children-teens-young adults are prodded and provoked into impulsive behavior and satisfying the id and letting go of their own self-control and pampering themselves by letting them know it's okay to be self-indulgent because everyone older than them is doing it.

Yet, you create unhealthy connections whenever you create a false link between buying stuff and personal achievement. Material items can never make up the emptiness of someone lacking substance. Yet every day, day after day you buy something you don't need from a place who doesn't give a shit about you, which in the end means some corporation paying less taxes than you is going to make a quick buck off of your worst addictions whenever you buy something made in China (or some other Pacific Rim country) for slave wages.

The fear mongers scare the shit out of you, knowing that you'll find solace in superficial consumerism, so then they'll offer you a cure for your shortcomings in life (ChristianMingle.com, Chevy trucks, ear wax vacuums, penis pills, terrible film version of a book). The fear mongers and their pals in big business profit from your worst social anxieties. They prey on your fears that you don't want to be the odd one out or be the only one to stray from the flock. They also know how to press the right buttons... and entice you to take a short cut and satisfy a desire to feel superior than everyone else, so you spring for a high ticket item to impress fake internet friends or mentally constipated neighbors who really don't give a shit about anything.
by Pauly at 1/30/2013 04:20:00 PM