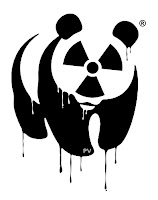 Not too many things are worst than eating at Panda Express, with the exception of say working at Panda Express. Don't send me hate mail about me being insensitive for poking fun at the min-wagers at Panda Ex or PandEx (either is appropriate slang that insiders call the joint). I was relieved to discover that PandEx doesn't sell pandas, but General Tso's might be some sort of pigeon and or dog meat (but at least it's not horse-meat like the burgers at Tesco).

I sincerely admire and respect anyone who can suck it up and work a shitty job slinging fast-faux-food, especially in today's bleak economy. Humping a crap job is a badge of courage. Sometimes you have to hump three or more and most of those jobs pay in the single digits. Yeah, you know things are tough when you get excited about making double digit dollars per hour. Sadly, it's impossible to pay down student loans when the only job you can find involves wearing a name tag or asking a customer if they want whipped cream with their mochachino.

One of my former roommates in Vegas (hello Grubby!) worked as a mystery eater at Panda Express... er sorry, PandEx. I think he got $60 per review. Maybe it was $75? Anyway, he got free Panda Express at least once a week. Sometimes it was once every three or four days. I tagged along a few times and sampled the goods at different PandEx around the Las Vegas valley. He always took diligent notes and sample different dishes. It was almost like being a spy during the Cold War, except you're eating fast food Chinese food and ratting out shitty employees who do incorrigible things like wiping their nose on their sleeve before serving you a plate of orange chicken, or give away free drinks to jail bail high school girls in the hopes of getting a rim job in the parking lot while a Ke$ha song drowns out life's emo-soundtrack that rattles around inside your head... that is, if you're the type of $9/hr cashier who doesn't care if the suits at PandEx HQ find out he's a rebellious college drop out, who lacks any qualms about giving away free soft drinks in exchange for perverse favors in the parking deck. Whatever it takes.

The faded wood on the fence looked like an image of the Virgin Mary, or some other religious figure than making Mexican grandmothers weep at the sight and say the rosary four hundred times before they pass out from exhaustion. The slumlord is Jewish, but not one of those super pious Jews who wears a kippah, so he's not ultra religious when it comes to things like driving on Saturdays, or hiring an illegal Mexican with a cross around his neck and a tattoo of Our Lady of Guadalupe on his forearm, to paint the fence in the alley. When the painter saw the piece of the fence that resembled Jesus' mother, he freaked out and refused to paint over it. Instead he returned with one of those seven-day candles featuring Jesus' bloody face (with a crown of thorns). The candle burned for twelve days and the alley cats wouldn't go near it... they were scared off by something not of this realm. A gust of wind knocked the candle over and wax ooze out onto the concrete. The controversial image on the fence that may or may not be a part of a larger intervention from divine beings. You know, like Touched By An Angel. Or it's just a bizarre coincidence. Or it's like a bad interpretation of a Rorschach test.

I read an old New Yorker column from the 1970s and the author snuck in a Bob Dylan quote about twenty years of schooling and getting stuck on the day shift. Bobby D was afraid that all our education was a false hope because we'd all end up humping a shitty manufacturing job. But Bobby D was a sick poet but he could not see into the future like we had hoped. Sure, going deep into debt to acquire secondary educational seems futile when there are not even crappy, labor jobs to be had. In the roaring 10s of the 21st Century, it's the service sector or the service sector. That's it. You're either a customer with money or a working class stiff with a name tag. It's more like twenty years of schooling and and you're on the Caramel Macchiato and Cinnamon Dolce Latte shift.

Dylan is in his 70s and he's on the road. On the bus. Well, probably on a swanky jet plane. No way Dylan flies commercial. He's private all the way. No TSA is gonna grab Dylan's junk. Dylan tours... for the love of the game? Maybe a few bad real estate investments? Times are tough. Dylan acquired forty years of education at the hard rain's gonna fall school of life... and he's still stuck humping the day shift, playing the Hollywood Bowl for super fans willing to fork over $500 for a seat within spitting distance of Dylan himself.

Dylan liked speed back in the day. Before supersonic jet planes. When you're on the road, bouncing up and down in the back of an old school bus converted into a tour bus. The speed let him stay up late nights and pen those magical Dylan raps. He channeled the beats from decade before with flowery, bold, let-it-all out imagery, and had the layered ideals of the Enlightenment from the Romantics from across the pond circa in the 18th Century, and then Dylan tugged upon the occasional Shakespearean sonnet, or twisted the story lines from Ancient Greek dramas to fit the 60s hip-cat jargon. The speed kept him awake, it kept him rambling. He eventually figured out he was strong enough to get cooking on pure adrenaline... and it took a while to finally kick the pills, but when he did... things were alright mama. well, aside from the Jesus freak stage... but we all don't talk about that time and overlook it like when your friends went through a phase when they were cult-like about yoga or rolling your own sushi. 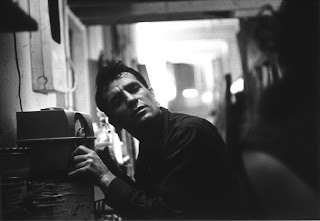 Jack Kerouac liked speed. Too much so. He never had access to the Walter White primo-ice. Jack resorted to more pedestrian means by cracking open Benzedrine inhalers.

Jack was born an addict. He was no dilettante when it came to ingesting the visceral experiences of sadness. He thrived on raw emotions and shot them into his veins. He snorted up jagged edges of life and knocked back shots of misery and chased them with melancholia cocktails. Life loved Jack; life killed Jack. Jack's emotional radar drew too much interference. He became numb trying to block out his own loneliness and his inability to accept that he didn't fit in to the post-war Americana that everyone else gleefully followed along. One by one by one. Jack needed a boost. Something to get him fired up. Mad about life. Mad about speed. Speed about mad. Speed. Mad Speed. Mad.

Jack? A total speed freak, yes indeed. He wasn't alone. Truckers loved it. Dock workers loved it. Housewives loved it. GIs return from WWII had gotten addicted to the "GO!" pills which gave them enough pep to help rid the world of Hitler, Fascism, and the Nazis. Funny... in an ironic way, because German lab geeks invented speed and Japanese scientists perfected it. WWII was the supreme battle of the speed freaks. The winner... got all the speed and access to the rich oil fields of the Middle East, and a fat-ass credit card bill from the Banksters which paid for all the guns and oil and speed to begin with.

He drank, chain-smoked, and gobbled up as much Benzedrine he could get his hands on. He cranked out On the Road crocked to the tits. Capote thought Jack's genius was hogwash and all he wrote was gibberish. "Fast typing from a drug-crazed speed freak!!" Jack didn't give a fuck. He dug it. Cassady dug it. Ginsberg dug it. Coltrane would have dug it. So that's all that mattered. Jack got paid. Pay the sad speed freak his money. The sad sack Jack bought more speed, jugs of wine, and cigarettes and hopped in the car whenever he could and chased his own ghost from highway to highway. When he lost all ambition for the road, he holed up at his mother's apartment in Queens and cried a lot and paced around and made frantic phone calls at 3am to whomever he could get a hold of and he was hopelessly searching for the vein... the right vein to put the spike back in and hope that stirs up the wordmaster inside the hallways of his mind. When it's time... it's time... to open up the hose and let the thoughts, images, faces, notes, scat, horn toots, and whistles and farts and chatty jive-talkers, and let it all run out onto the paper like it happened so many times before. And like so many times before, he'd hit a wall. Hard brick wall. Bloodied his nose, yet he could never get the same rhythm and magic flowing like the long days that bled into nights when he typed out his manuscript on one long roll and was chopping down on his lips, jacked up on Bennies and cranking out thousand words chunks of On the Road in a single breath. He'd inhale a cigarette and hold it in until he wrote five hundred and fifty-five words then he unleashed a howl as he exhaled a plume of smoke and tapped his feet on the floor like he was sitting in a jazz club on Swing Street listening to Bird's bebop revolution, but all that pitter-patter on the ground was just Morse Code that Jack deciphered with his fingertips as he pounded the keys with courage and excitement and fury and each word jumped off the page and smack him in the face so he wrote fast and faster and faster so he'd get numb to all the slapping so it was one fiery sensation tearing off the skin on his face and the rest of his arms and legs itched like fire ants burrowing just below his skin and scalp and lodged in between his finger tips. The speed made him feel alive, made him feel invincible, made him feel feelings. Feel. He felt it. The speed was him. He was the speed. Mad speed. The madness flowed. He sprung to life. The speed-turbo-boost allowed his mind to finally catch up with the collective consciousnesses of the universe.

Then Jack died. His obituary did not have many run-on sentences.