Nicky and I made run too many times to count. She manned the wheel and I rode shotgun. Like peas and carrots.

I occasionally did solo sojourns from Los Angeles to Vegas and always got up at 5am to guarantee a quick exit out of the City of Plastic Angels to beat the first wave of rush hour traffic  and climb the Cajon Pass and reach Victorville before the bulk of truckers began their day. Before I knew it, I had burned through a full set of a Grateful Dead bootleg and racing through prime bat country... just outside Barstow on the edge of the desert. At that point it's smooth sailing... smooth flying... smooth driving. Set the gearshift on cruise control, roll down that hill, reach the state line and welcome yourself into the heart, soul and loins of the Nevada universe.

The drive is always 264 miles. Las Vegas. Founded by Mormons. Invaded by mobsters. Overrun by suits. From eternal salvation to overindulgence and eternal damnation. It's one crazy ride any way you cut it.

Nicky and I departed before lunchtime which meant our actual lunchtime was spent honoring a tradition at one of the few In and Out Burger weigh stations en route to Las Vegas. We listened to music and podcasts, which added something special in the background to compliment the scenery. The mountain tops had a light sprinkling of snow, just enough to make it noticeable that you were driving through bat country in the winter and not a 120 degree summer scorcher. We spent too much time in Vegas during the blistering summers; it was refreshing to make a quick trip in the middle of a SoCal/Southwest winter.

I didn't pack much. I also travel light. Habits are hard to break. I brought along a book because I figured my late nights would be devoted to reading. Expanding the mind. Feeding the vocabulary. I used to love late nights in Vegas... I was a vampire on the prowl, lurking in the shadows and ready to flirt with the Pai Gow gods at any given moment. But that was an edgy side of me I smoothed out over the years. The jagged edges are now mellowed and smooth. I curtailed the huge gambling leaks and no longer waste my breathing moments trying to beat the house. The house always wins which is why I only bet on sports these days. I'll only play Pai Gow as a social event with friends, but those uber-degenerate days sitting down to play heads-up against an old Asian lady dealer are a thing of the past.  Instead of embedding myself in the "cavern of shame" and donking it up in the pits with the other restless crazy Asians, I embraced a zen-like approach to just be myself... which means I sit around and read and reflect late nights. Just because I'm in Vegas doesn't mean I have to altermy current routine. I brushed aside the urges and welcomed the tranquility of listening to music while I read and listened to more music. Cultivate the mind and nourish the musical soul.

No more late night hijinks... at least for now. I finished a two-week bender in NYC and returned to the West Coast to get back on track. Writing and work.  I needed to be sharp. Very sharp. I didn't go to Vegas to party; it was all business. It was work. All work. All work and no play makes Jack a dull boy. But I had my time to play in Vegas during previous trips. It's time for work.

The adult playground that is Las Vegas? Been there. Done that. It's not that sort of Mecca anymore. It's weird how living in Vegas tweaks your perception on the world, and then leaving Vegas sort of re-boots your brain and you realize it was all just a dream. But thus its appeal. It's where people go who never want to grow up. Degenerate Peter Pan. Disneyworld for alkies and hard luck gamblers. But that's not my vibe anymore. I'm not a fucking tourist looking for a cheap thrill and to suck out in blackjack or maybe go into an alcove in some whomping-ear-destroying-whomping club and get a sloppified handjob by a frisky cougar jacked up on diet pills and Appletinis. 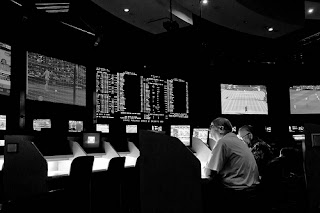 I went to work as soon as I got into town. I got caught with my pants down backing my hometown Knicks... a team in complete disarray.  I told ya that Amare's return would upset the balance of the Knicks universe, right? But Melo was back in the lineup after sitting out a one-game suspension after losing his mud and going on Honey Nut Cheerios Mega Tilt (HNCMT). Ugly game. Knicks looked like shit. We tore up that ticket. Somehow, I bailed myself out with a couple of late night games.

Golden State is my new favorite team because they generated the most money. It's paying my bills. Putting food in my belly. I should be walking around my neighborhood with a David Lee jersey and taunting spoiled douche-tard Lakers' fans. And the Lakers? Disgusting. I'm a Jets fan so I can tell you it's not pretty when the wheels fall off the bus... and the bus falls off itself. Ugly. Fugly. Fucking fugly. I've cherry picked spots to bet against the Lakers all season. It was easy for me to walk up to the Cantor counter and take a position with Oklahoma City. The youngsters from OKC blew through town and Kevin Durant dropped 25 in the first half and 40 by the end of the 3Q. He finished with 42 and made Kobe his bitch. It was fun to watch the clerk cash my ticket. It was Friday. Pay day. Nothing is sweeter than turning the tables on the Man and taking away money from corporations.

I woke early on Saturday morning to write and check the latest lines at Cantor. They don't post their lines online which is why they are evil geniuses. I was up early. Light was still absent. Darkness everywhere. Very early in the morning for Vegas standards that I could have passed for a guy who was just going to bed. I had a rare opportunity to take advantage of multiple venues to wager on sports... legally... without the Man and his crooked Uncle Sam wagging his finger at me for doing something (betting on sports) that everyone does irregardless of laws and enforcement. My morning included a significant amount of running around. Back. Forth. Too bad I don't trust anyone to do the legwork for me, because I could have been curled up in a warm bed with my girlfriend. Instead, I got a good workout. Sprinting back and forth to different casinos and cross-checking offshore to get the best price. Bargain betting. The difference between a half-a-point has broken many a man's spirit, and bankroll, and skull, and backbone, and the will to live.

Email ThisBlogThis!Share to TwitterShare to FacebookShare to Pinterest
Tags Las Vegas, On the Road