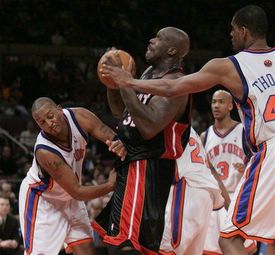 Penny Hardaway grabs Shaq's package to slow him down.

I wrote two articles this week and both were accepted. 2 for 2. And I just got paid for one of them. God bless wire transfers from Holland! I'm in the middle of writing the third, which I hope to be done by tonight.

Last night, after both my favorite basketball teams lost (UNC and the Knicks), I played online at Empire Poker for five straight hours. I was working off a bonus. Basically I deposited like $500 and I got a $150 bonus. I had to play over 1000 hands... raked hands (which are hands that I actually play and bet with)... in order to qualify. I had to see over 3000 hands before I was awarded my bonus. It took almost a week and I'm done. I got a free $150. Whooo hooo! Free money. That's the equivalent to a one-way ticket from NYC to Las Vegas. Empire just paid for half my trip.

I also made a few dollars in the process of working off the bonus while I watched Jason Spaceman play in a tourney with a $350K prize pool. He made the money and took 46th. Good job, dude.

Before I crashed I wrote for an hour. Some of my best work happens between the hours of 3am and 5am. Go figure. This past month I switched my writing schedule so I could wake up and do my usual two hours (my own workout) and then I would spend the mid afternoon writing or doing research on freelance articles. I couldn't sleep and woke up early to write and read through a few new books that arrived this morning.

How about this little tid bit in the editorial section of the NY Times called The Whitney Expansion. It discusses the Whitney Museum's future plans to grow whcih might cause some ripples into the historic section of the Upper East Side of Manhattan.

Jen over at Gothamist had some sobering news on the upcoming Metrocard fare hike.

I discovered that Phish has released a two new shows from 1994 to it's Live Phish site. Here's what it said:

This release features two shows from the experimental 1994 fall tour and continues a rich legacy of download and physical releases from the archives. Hold on tight! Phish's back-to-back performances on November 30th, 1994 at Evergreen College in Olympia, WA and December 1st, 1994 at the Salem Armory in Salem, OR are perfect examples of the band's ability to weave their sets of diverse styles of music into cohesive extended journeys. These shows display that talent at its peak, with dynamic sets that showcase Phish's ability to link one song to the next while stretching limits to create a non-stop tapestry of exploration. An added bonus is filler from November 12th, 1994 at Kent State University featuring a transcendent Down With Disease and other gems.

Seriously, the two shows look great. Michelle, a friend of mine in Seattle, went to Evergreen and she gave me a bootleg tape of the 11.30.94 show! And I'm going to download the Salem Armory show (Peaches, Mound, Tweezer to open the second set) as soon as I can.

Speaking of Phish, thanks to Fish over at This Fish Needs a Bicycle for linking up the Tao of Pauly on her Bloggie nominated blog. We seem to share the same unhealthy addiction to Degrassi. I have this weakness for the way Canadian girls say the word "sorry" and "about".

By the way, here's another another segue... fuck Wal Mart, eh! You know that the reason the Wal Mart fail is one of the richest in the world? They do not pay their workers overtime and do not allow unions. When one store in Canada had workers that tried to unionize, the suits over at Wal Mart decided to shut it down entirely!

As I am writing this post, I am seriously mutlitasking.... playing poker online at Party Poker, with Dawson's Creek on in the background and sitting on the couch in all forms of dishabille. TBS is airing one of the initial episodes from the first season of The Creek. Anyway, here's what BG sent me in an IM about my all-time favorite TV crush... Katie Holmes:

although there's something almost embarrassing about those high waisted pants, she's awful cute

Yeah, BG had the day off and I just outed him for watching Dawson's Creek.

I admit... my name is Pauly. I am a compulsive gamblor, alcoholic, and sex fiend. The only TV shows I watch are... The OC, Dawson's Creek, and Degrassi.

Lastly, I must say that my best thoughts go out to my friend Iggy. They had to bury his best friend's wife yesterday and he's stuck in the middle of a dark patch of life. Hang tough, brother. Untimely deaths make you realize that life is so much more important than poker, blogs, and being flamed by purblind bucolics. I talked to him and suggested that he take a week or so off to just get his space together and live a little. Poker will always be there. Life won't.