"The past is not dead. In fact, it's not even past." - William Faulkner

19 Feb 2005, Miami, FL... I woke up and wrote for a while avoiding all temptations to check my email. I sat outside in the early morning sun to read the local paper. When Jerry woke up, we headed off to the Hard Rock in Hollywood to meet up with Shappy. We all went to college together many moons ago in Atlanta and have mellowed out over the years. If you think I'm crazy today, you should have met me thirteen years ago. I was a disheveled lunatic. I think it was the steady diet of Taco Bell, Jim Beam, and mushrooms that drove me insane back in the pre-internet days when Kurt Cobain was still snorting China White and I had a penchant for young, promiscuous, self-destructive, alcoholic Southern girls who could have walked straight off the pages of a Tennessee Williams manuscript. 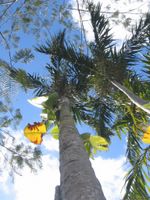 I first started playing a lot of cards in college when I lived in my fraternity house. We played a lot of Spades before and after dinner and even held house tournaments. My Spades partner was my good friend Jon Schanzer. During the long, hot, boring summers, we'd often play Spades to break up the down time in between hitting golf balls off our front lawn into the parking deck across the street or visiting one of the many Gentleman's Clubs all over Atlanta (ok, they were strip bars... Cheetah, 24K, Tops N Tails, even the Gold Club and my favorite The Pink Pony). Again this was way before the internet was more accessible and we didn't have cable TV.

We played poker too. Lots of it. Our wild sessions would include guts games like Four Barrel, Kings and Little Men, seven-card stud, and five-card draw. No hold'em at all. Jerry used to host games at his apartment. After we got the girls across the hall hooked, two tables were going on nightly. The games would last until sunrise and we'd try to get Smooth the three-legged cat stoned. Cards was an activity we participated in frequently in college, and that's where the origins of my journey as a card player began. We even took trips down to the riverboats in Biloxi, Mississippi (Casino Magic anyone?) to play blackjack and Caribbean Stud when they first legalized gambling down there.

Man, I should write a book about my gambling life during my frenetic early twenties living in the heart of Dixie Land. I have hundreds of stories about endless card games, skipping school to follow the Grateful Dead all over the Southeast in a hallucinogenic fog, and sordid tales about drunken binges during Mardi Gras and Jazzfest in New Orleans. By the way Shappy was a loose cannon in college and could party it up like a rock star. In his apartment, he had a photocopy machine and his pet iguana named... Iggy. I can't make shit like that up. Shappy had a lizard named Iggy and that fucker ended up eating my stash... sort of. That's a long story and due to legal reasons, I cannot go into the specifics of Iggy, the marijuana munching iguana. Those are some warm memories and deserve to be preserved in a novel someday.

Anyway, back to the Hard Rock casino... Shappy arrived early and met us inside at the poker room. We walked through the outdoor mall filled with different shops, art galleries, and restaurants to get to the poker room. It was 11am and everything was still opening. When we got to the sign in desk, we requested to sit together at the same table. We had to wait until they decided to open up a new table. 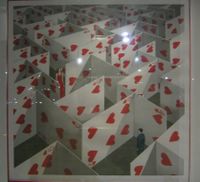 The wait wasn't too long, maybe a half hour. In the meantime, Shappy showed me his "Fish" ID. He laminated a cheat sheet of hand rankings. He printed it up on his computer at home. I couldn't tell if he was trying to act like a fish or was really a fish. He didn't care. He was there to have fun and he was content to loose a couple of hundred dollars. He said he had been playing on Party Poker and had a regular game at his club on Tuesdays. He wanted to get me into the $1000 buy in game. It sounded really juicy but I was leaving before then. Next time.

That was the pretty much the lineup that sticks in my head. We played at a new table, straight $2. I bought in for $100 because I knew it was going to be a wild ride. I bankrolled Jerry and he had $50 on the table. Shappy started with $100. In the first orbit I had KK twice. Pocket Hellmuths told me to raise preflop both times. I got eight callers once and lucky for me, no aces fell on the flop. Well, both held up and I had an early lead. We ordered a first round of drinks, a Corona for me and Jack Daniels and diet coke for the guys.

I wasn't paying that much attention to the table but a couple of guys were calling everything. I was joking around and catching up with Shappy. I played a few hands and somewhere in the middle of our second round of drinks I declared that I was going to play every hand for a full orbit. I started with the big blind a KTs and ended up playing or seeing 14 straight flops. AK lost and I won a huge pot with 57s when I flopped an open ended straight flush draw. I got a little excited because the Hard Rock offers a bad beat jackpot. I missed my straight flush but still won the pot with a baby flush. I had doubled up my buy-in during my see every flop experiment. I was tempted to keep it up, but opted to take a 15 minute break and grab a slice of pizza from the food court and called Derek.

I can't recall much from the middle part of the session. I stopped taking notes and was bleeding my stack away on the rake and pots more so than losing to any of the other players at the table. Shappy and Jerry got a kick out of what I'd say to female dealers after I won a pot. While I scooped my pot, I'd toss a $2 chip to the dealer and say, "Thanks, Sweetie."

The wondered if I would say that to any male dealers. I told them I just say, "Thanks, Honeybunch."

My favorite dealer was a guy who looked like a young, homosexual version of Ving Rhames. He dealt fast and was on top of the action. He definitely picked up the pace of the game. When it was your turn to bet he'd chirp, "Two to you!" and if you folded he'd smile and say, "Too-da-loo!"

There was one funny moment when the young black kid next to me, who was the size of an offensive lineman, went heads up with Shappy. At one point Shappy pulled out his sunglasses and put them on. The kid couldn't stop laughing and they battled all the way to the river. I think Shappy rivered the guy and after he scooped the pot he pulled out his cheat sheet and showed it to the kid. I tried not to laugh. 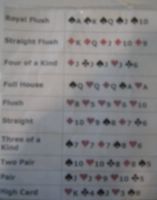 Shappy's Cheat Sheet
We had a new waitress, a hot blonde named Haley, of course. I couldn't tell if she was busting on me for switching to ginger ale instead of beer or if she was just joking around. Jerry and Shappy knocked back cocktails at a fast pace. Jerry had nearly lost all of his buy in and I gave him another $50 to rebuy. He won a big pot right away when he flopped a set with 44. He also took down a nice pot with KK. All three of us won with pocket Hellmuths.

The last third of the session was all highlighted by the drunken antics of Shappy throwing his money around. Our table was located in the back near the tournament tables. We were along the wall, and my back in Seat 8 was against the rail. At any given time I'd turn around and there would be a group of five or six people standing there. Sometimes I'd ham it up and show them my hole cards. Never got The Hammer though. That would have been fun.

When a couple of railbirds tried to hit on Haley, our hot waitress, Shappy leaned back in his chair and snapped at the middle-aged tourists from Long Island, "That's as close you're gonna get, buddy!"

They were quiet for a few seconds until one of them finally shouted out, "Go back to losing your money."

One of their friends was sitting in Seat 2. And that idiot cracked my KK with AJ when he river'd me. At that point I went on a cold streak. All my good hands were cracked. 10-10 twice, AK, and JJ. Jerry had stormed back and was past breaking even.

In the last hour Shappy started overtipping the dealers and ordered more drinks. We were heads up at one point. He had nothing. I knew that. But I had nothing either. I had 46s. He had 59o. I flopped bottom pair and he caught a 5 on the river. My 6s beat his 5s! Insane. That drew grumbles from the table. He ended up pissing everyone off when he gave one dealer a fat tip when she left. He was raising every pot preflop and seeing everything tot he river. He won four pots in a row... each time on the river. He got Mr. Know It All on tilt when his KK were cracked by Shappy's ATo. Even Shappy stung me with his magical river work. My AJs lost to K6o. He caught a four flush on the river to beat my two pair.

I was down about $50 and I figured that covered the generous tips, bar tab, and the rake. Not bad for seven and half hours of poker. I was there to have fun and hang out. It was well worth the price since I had a blast with two old friends. Jerry won $25 too! I took my cut. Shappy dropped nearly $300. Almost $80 of that was in tips to the two last dealers. If you count all the other tips for all the pots he won and drinks he bought with his chips, I'd say $150 went to the house and the staff in one way or another. Only half his stack went to the other players. 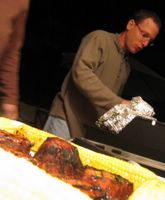 Jerry at the grill and Pauly making cocktails
We got back to Jerry's where the wives were hanging out. Jerry fired up the grill and prepped dinner: shrimps, steaks, corn, mac and cheese, and sausage. I mixed a few cocktails for everyone and we were ready for a late night feast.

After dinner, Jerry started a game of dominos. I haven't played since college and forgot the basics. 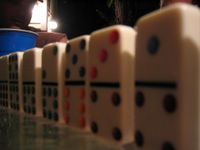 It's not a tough game and I picked up right away. There's limited strategy involved and I was paying more attention to drinking my beer and talking to Shappy. We played five handed and Shappy's wife Annette ended up edging out Sarah for the win. I almost came in last place too.