Toni hosted another round of $40 buy-in poker tournaments at The TowneHouse. I was running a little late and quickly wandered out of Grand Central Station, past the hordes of commuters heading home after a long day at work, and even snickered at the pretentious idiots smoking cigarettes and yapping on their cellphones in front of Cipriani's. When I rounded the corner by the Whitney Museum annex, which is really a public space with gaudy sculptures, I also laughed at a running inside joke some friends of mine have going. I stopped by a bodega, picked up a six pack of Red Stripe (the official beer of the Tao of Pauly), and I was ready to go.

We had 11 for the first tournament (Top 4 places paying) and 10 for the second (Top 3 pay). I took 2nd place in the first and bubbled out of the other. Last night was special because Toby from Nut Heart Flush crashed the event. I told Toni about her poker blog and after taking a peek, she offered up an invite right away. For two nights in a row, I played in a tourney with Toby. By Saturday, we will have played in three in four days together! Pretty random, huh?

Last night, Alma won both tournaments. And yes, I got beat by a girl.... heads up again... and blew a huge chip lead. Yeah, just another night of pink chips, bad beats, and inebriated lawyers. 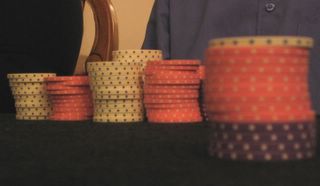