Where Have You Gone, Robert De Niro?

Robert De Niro is doing credit card commercials. I know why he's doing it... American Express is one of the big corporate sponsors of his brainchild... the TriBeCa Film Festival. You can't fault him for getting a few extra bucks to fund his festival which helps out smaller films. I can live with that. But what the fuck is he doing with all the cash he's been getting to act (well that's a tough word to use since he's been phoning in his performances) in terrible movies?

Over the last decade he's been slipping... hard and fast. Perhaps it's time he moves behind the camera and follow some of the paths to directing that his peers like Robert Redford and Clint Eastwood have taken and found tremendous success, instead of fucking around lobbing pot and fart jokes back and forth with Ben Stiller in another Meet the Parents vehicle. It's like going to Emeril's house for a huge feast and he ends up popping a frozen dinner in the microwave. De Niro used to be a chef. The chef. What the fuck happened?

Without sounding too much like Jim Lipton, it's time for me to quickly evaluate the plunge in the film career of Rober De Niro... from Travis Bickle to Jack "Talk Thai Real Well" Byrnes... the desconstructing begins.

A lot of his early work is overlooked. He was still finding his way. In Greetings he worked with acclaimed director Brian DePalma for the first time. They would make three films in the late 1960s together and hook up later on in the 1980s. The funniest early role by far was Hi, Mom! where a voyeuristic Vietnam Vet (De Niro reprising his role in Greetings) returns home to Greenwich Village and begins filming his neighbors across the street. Hijinks ensue. He also starred with Shelly Winters in Bloody Mama. Again his work was raw, but you could see glimpses of greatness.

Drug films were big in the early 1970s. De Niro did two. Jennifer on My Mind was based on a novel and Born to Win was one of the first junkie films. A lot of folks think De Niro only recently started doing comedy. Nope. He had one of his most hilarious roles in The Gang That Couldn't Shoot Straight as a lost Italian cyclist. The film was supposed to be about gangster Joey Gallo. Bang the Drum Slowly was one of my favorite films as a kid because it was about baseball. De Niro played a slow-witted back-up catcher from the South who befriends the NY Mammoth's superstar pitcher. It's actually a sad film because at the end because De Niro's character, Bruce, gets cancer. A lot of folks called this the baseball version of Brian's Song.

I'm a New York guy and it's cool when you see actual New Yorkers play New Yorkers on the screen. Nothing is worse than seeing a guy from California try to do a British accent, let alone a Boston accent for two hours. New Yorkers are a smart breed. We know when the film is shot in Toronto or on a set in Hollyweird. We know what our fuckin' streets look like. We also know when some idiot is putting on an exaggerated accent. De Niro grew up in the Village, just like Martin Scorcese. Mean Streets, a film about low-level thugs hustling in Little Italy, was perfect for De Niro. Johnny Boy is my favorite De Niro role. His other roles are overrated. That film also put Martin Scorcese's name on the map.

He followed those roles up with the difficult task of assuming a young Vito Corleone in The Godfather: Part II. How does one play the younger version of a role perfected by Marlon Brando? He figured it out and was the highlight of that film. To hell with Al Pacino. He kicked ass and also got an Oscar nomination and eventually won his first Oscar for playing young Vito. 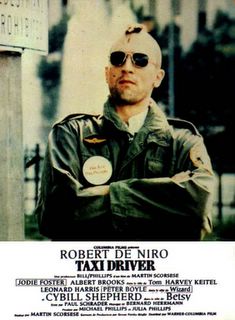 He continued his streak with the gritty Scorcese flick Taxi Driver and made Travis Bickle a household name. Was there anyone more scary than the scenes with Travis and a Mohawk? For you younger readers, Taxi Driver is the film where De Niro improved the infamous, "You talking to me?" scene where he slowly descends into his own insanity. He was nominated for his second Oscar, that time as a Lead Actor.

Although New York, New York wasn't my favorite De Niro-Scorcese flick... he did an decent job there. In The Last Tycoon his work is overlooked probably because the critics bashed that film and it's gotten a bad rap ever since. It's not easy turning great novels into films. This adaptation of F. Scott Fitzgerald's novel had some amazing actors in the film... the likes of Jack Nicholson, Robert Mitchum, and even Tony Curtis! Elia Kazan, in the twilight of his career, directed De Niro in the film that no one I know has ever seen. Too bad.

That brings us to... Deer Hunter. The Russian Roulette scene with Christopher Walken is one of the most memorable in all of cinema. He was nominated for his third Oscar in five years. Although Deer Hunter won best film, he lost the Best Actor race to Jon Voight.

It's tough for me to group Raging Bull into the 1980s era of films. In my mind it belongs in the Golden Age of De Niro. Some folks consider it his best role. He definitely did the most off-camera work to prepare for the tough task of playing the volatile Jake LaMotta. He learned to box for the film and bulked up during filming so when he played an older LaMatta, he could naturally look like a guy who sat around on his ass eating and drinking. He won his second Oscar in six years, with a stretch of four nominations. He worked with Francis Ford Coppola and Scorcese twice during that Oscar run. Indeed the ten year stretch for De Niro represents the best work he's done to date. Nothing else even comes close to the strength of the perfomances he gave in Bang the Drum Slowly, Taxi Driver, Mean Streets, The Godfather: Part II, Deer Hunter, and Raging Bull.

At this point, it's all downhill after Raging Bull with a few highlights every few years. In True Confessions, De Niro played a priest in the first of several religious themed roles he would play later in his career. He teamed up Jerry Lewis and Martin Scorcese again in The King of Comedy where he plays a stand-up comic and stalks his favorite talk show host, while desperately trying to get a spot on his show.

I really enjoyed his work in Once Upon a Time in America, but it wasn't as good as it could have been. Sergio Leone did a good job directing an ensemble cast. Brazil is one of my favorite De Niro films. Written and directed by Terry Gilliam, a lot of folks don't know about this hilarious flick about a future time with serious Orwellian undertones. Since I went to a Jesuit high school, I was forced to go see The Mission, starring De Niro as a slave trader turned priest. You gotta love films about 18th century Jesuits.

The Untouchables and Midnight Run were great films, but De Niro only played a small role in the greatness of the flicks. He chunked up again to play Al Capone. Too bad Sean Connery stole the scenes in that film. I loved watching Midnight Run. There are so many funny scenes in that. I am not a fan of Charles Grodin, but he kept me laughing the entire flick. His scenes with De Niro are priceless.

And who could forget the awesome (intense sarcasm there) role as a group bandits on the run hide as priests in We're No Angels.

I'm pressed for time, so I'll do this quickly. The 1990s started out great for De Niro. It looked like he was on the verge of a renaissance. He impressed me as gangster Jimmy Conway in Goodfellas, which is one of my favorite Scorcese films. Joe Pesci stole the show in the film though and that launched his career. He was nominated for another Oscar in Awakenings but I thought that was more of a political nomination and the result of a thin crop of best acting performances that year... Costner and Depardieu... enough said!

Then Cape Fear rolled along. Wow. A little bit of Travis Bickle kept coming out, but he kicked ass as the deviant Max Cady. Too bad Anthony Hopkins won an Oscar for Hannnibal Lecter. If Cape Fear came out one year earlier, he would have won his third Oscar. He did pick up his sixth and final nomination. The well has been dry ever since.

He tired his hand at directing. Bronx Tale was pretty good about a relationship with a bus driver and his son, who is influenced by the local gangsters. Not too bad for his debut. he also acted in a slew of bad flicks. Only Casino and Ronin stand out for me. His role as Ace in Casino was great but it felt a little bit derivative based his his past experiences with Scorcese. In many ways, it seemed like a Goodfellas sequel. He did a good job, but Sharon Stone actually stole the spotlight for her role. Aside from a supporting role as a priest in Sleepers and a 14 second sex scene with Briget Fonda in Quentin Tarratino's Jackie Brown... that leaves... nothing left to point out.

So what has he done in the last five years? Crap. A crappy Ed Burns flick. An awful experiment with Marlon Brando that went bad. Pot jokes with Ben Stiller. Another Analyze sequel. And a cartoon. Are you fucking shitting me? These choices are definitely not like the risks he took back in the day. Now he's thinking about a Taxi Driver sequel. Ouch. Shoot me now, Travis Bickle, while you can!
by Pauly at 2/03/2005 08:35:00 AM