Someone told me they had a dream and they figured out their calling in life. They were going to start a dog washing business... and they woke up the next day and tried to buy the domain: washmypoodle.com. He was crushed when he found it a similar business already existed. Maybe if some parents loved their kids as much as their pets... then their own offspring wouldn't be running around with trucker hats on slightly askew and pants baggy enough to hide both Olsen Twins, Mischa Barton, and a sack of potatoes in the left pants leg. 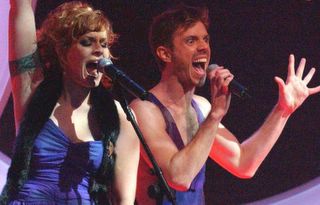 What's the deal with the lead singer from the Scissor Sisters? I mean, they got one decent song but why overalls? I've been anticipating an ugly trend in the immediate future... hispters on the L train jumping around in overalls. Could this be the overall anti-urban revolution? I remember back in the summer of 1997 I drove cross country with Senor when I moved to Seattle. One of the few things he wanted to do along the way... was to buy overalls. We went to a Wal Mart in Wyoming and he didn't see anything he liked. I thought it was weird but hey, I'm not one to come between a man and his overalls. When I dropped him off at Sea-Tac airport after our two week journey... I felt very sad. He wasn't going back to NYC with overalls. Chicago, Nebraska, Colorado, Jackson Hole, Spokane... not one place had the overalls he was looking for.

To this day, I dunno if he ever got his wish. Thank God that fashion is cyclical. Right? Hold onto to your dreams Senor... overalls are coming back!

I was listening to old jazz CDs (Charlie Parker is the man) this morning while I slowly read my 87 new emails (not including gmail). That was in just 6 hours. Christ. Do you know how much email I get each day? And imagine if AOL was blocking most of that spam. A few still slip through the cracks. I'm also on a lot of investor email mailing lists and I get "stock tips" for time to time. Then again, how hot is that stock tip if I'm getting in an email? For the most part I have all my money out of the stock market. I think I have more cash floating around in my various online poker accounts then invested in American stocks. The one stock I'm riding strong is a Canadian energy stock. Aside fron hat, my cash is sitting in a few offshore bank accounts.

The big question for me is... Philly and the money line or the Pats and the points?

I hope to consult my panel of pro football scholars this weekend. Of course I should be asking Haley and Jenna... since they took fifth in my football pool this year. Stay tuned for that post.

Anyway.... I've been on a small mini-rush playing poker the last few days. It feels weird because I am winning again. Seriously, I cannot tell you how much better I feel and can sleep at night when I go to bed after a winning session. And when I wake up in the middle of a losing streak... all I want to do is shoot myself in my thigh. If you don't know... I lost all the money that Briana staked me just after Turkey Day. I was getting cold cards and then I made a slew of mental errors. Ironically sandwiched in between was a profitable run to Vegas. That's when I realized I play better poker... live and in person... than online. I've been trying to play as much as I can since that relevation.

This week I have no less than invites to four tournaments (well, I organized one...). I'd like to think I am good enough to win all four. Wednesdays tournament is going to be tough. I playing with my fellow poker bloggers online in the first WPBT event on Poker Stars. Last time was had over 130 players. On Thursday, Toni is hosting a tourney at the TowneHouse. Saturday is the Blue Parrot Invitational... and all the NYC poker bloggers will be playing in that event. Ugarte is hosting a Super Bowl tourney out in Crooklyn. I'm a definite maybe for that one.