I finally got around to updating my fotolog. I posted a bunch of shots the last few days. Take a peek. I am working on a photo gallery for my paintings. Speaking of which, I heard that BG's smokin' hot neighbor was having a glass of wine in his apartment last night (you dog, you!) and commented on how much she liked my painting that I gave BG for his 30th birthday. Very nice. I wish I had more time to take up painting again. Blogging has pretty much taken over most of my free time. Maybe I'll quit blogging for a month, move to Amsterdam to paint, live on a houseboat near the Red Light District, and smoke a chunk of hashish the size of a spider monkey with neo-hippie girls from Norway who giggle everytime I throw out an obscure Knut Hamsun reference.

Moving on. If you didn't know, I won Daddy's Crush Your Bookie football pool. The first half of my prize arrived in the mail yesterday... playing cards from 1864. Holy shit! That was some cool stuff. The cards do not have any numbers on them and the corners are not rounded. These are what soldiers during the civil war were using during their down time.

Here's the letter I got with the cards:

To Whom It may Concern:

You are receiving this notice to inform you that you have completed the 2004 NFL Crush Your Bookie season with a higher game selection percentage than our very own, Daddy. While this honor is not often bestowed, we would like to congratulate you on a job well done. Along with this letter you should have received a replica 1864 playing card deck that can be used at your own discretion.

And now a word from our Sportsbook and Poker representative, Daddy...

Hey motherfuckers! Thanks for kicking my ass this year in Crush Your Bookie. I hope you enjoy the playing cards and look forward to doing it again next season. Now, go fuck yourselves... Daddy

Thanks again for participating and we hope to see you again next season.

Cordially,
The Folks at Snail Trax

Here are a few samples of the playing cards. You can click on the pictures to enlarge... 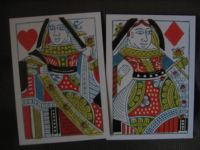 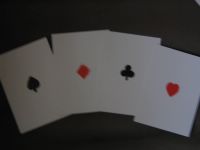 Hilton Sisters (circa 1864) and Quad Aces 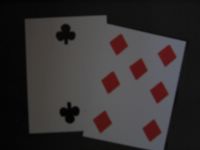 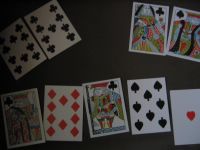