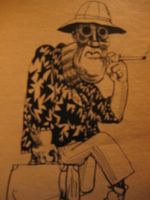 Drinks with Hunter is a chilling read.

There's a cool photo gallery of Hunter from Rocky Mountain News. Check out their news archives for random news on Hunter.

Lastly, make sure you read one of my favorite pieces of writing... ever.... called The Kentucky Derby is Decadent and Depraved by Hunter S. Thompson. Here's a bit:

In the air-conditioned lounge I met a man from Houston who said his name was something or other--"but just call me Jimbo"--and he was here to get it on. "I'm ready for anything, by God! Anything at all. Yeah, what are you drinkin?" I ordered a Margarita with ice, but he wouldn't hear of it: "Naw, naw...what the hell kind of drink is that for Kentucky Derby time? What's wrong with you, boy?" He grinned and winked at the bartender. "Goddam, we gotta educate this boy. Get him some good whiskey..."

I shrugged. "Okay, a double Old Fitz on ice." Jimbo nodded his approval.

"Look." He tapped me on the arm to make sure I was listening. "I know this Derby crowd, I come here every year, and let me tell you one thing I've learned--this is no town to be giving people the impression you're some kind of faggot. Not in public, anyway. Shit, they'll roll you in a minute, knock you in the head and take every goddam cent you have."

I thanked him and fitted a Marlboro into my cigarette holder. "Say," he said, "you look like you might be in the horse business...am I right?"

"Oh yeah?" He eyed my ragged leather bag with new interest. "Is that what you got there--cameras? Who you work for?"

He laughed. "Well, goddam! What are you gonna take pictures of--nekkid horses? Haw! I guess you'll be workin' pretty hard when they run the Kentucky Oaks. That's a race just for fillies." He was laughing wildly. "Hell yes! And they'll all be nekkid too!"

I shook my head and said nothing; just stared at him for a moment, trying to look grim. "There's going to be trouble," I said. "My assignment is to take pictures of the riot."

I hesitated, twirling the ice in my drink. "At the track. On Derby Day. The Black Panthers." I stared at him again. "Don't you read the newspapers?"

The grin on his face had collapsed. "What the hell are you talkin' about?"

"Well...maybe I shouldn't be telling you..." I shrugged. "But hell, everybody else seems to know. The cops and the National Guard have been getting ready for six weeks. They have 20,000 troops on alert at Fort Knox. They've warned us--all the press and photographers--to wear helmets and special vests like flak jackets. We were told to expect shooting..."

"No!" he shouted; his hands flew up and hovered momentarily between us, as if to ward off the words he was hearing. Then he whacked his fist on the bar. "Those sons of bitches! God

Almighty! The Kentucky Derby!" He kept shaking his head. "No! Jesus! That's almost too bad to believe!" Now he seemed to be sagging on the stool, and when he looked up his eyes were misty. "Why? Why here? Don't they respect anything?"

I shrugged again. "It's not just the Panthers. The FBI says busloads of white crazies are coming in from all over the country--to mix with the crowd and attack all at once, from every direction. They'll be dressed like everybody else. You know--coats and ties and all that. But when the trouble starts...well, that's why the cops are so worried."... More